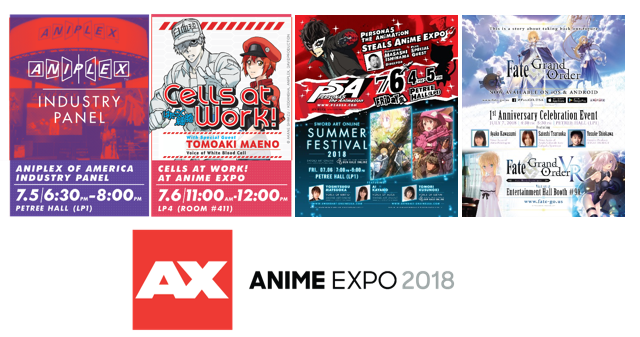 SANTA MONICA, CA (June 8, 2018) – At their Industry Panel at A-Kon (Fort Worth, TX) today, Aniplex of America announced their schedule of events and special guests for Anime Expo 2018 in Los Angeles, California. The announcement revealed that they would be hosting panels and events for many of their popular shows including PERSONA5 the Animation, Cells at Work!, Sword Art Online Alternative: Gun Gale Online, and the highly anticipated Sword Art Online: Alicization–. Furthermore, following last year’s successful event, the immensely popular Fate/Grand Order returns with their first anniversary celebration event at Petree Hall.

In the Sword Art Online corner, the many special guests scheduled to appear include Yoshitsugu Matsuoka (VA for Kirito for SAO -Alicization-), Ai Kayano (VA for Alice of SAO -Alicization-), Tomori Kusunoki (VA for LLENN of SAO Alternative: Gun Gale Online), Keiichi Sigsawa (Creator of SAO Alternative: Gun Gale Online), Shinichiro Kashiwada (Producer of the SAO series), Kazuki Adachi (Producer of the SAO series), and Kenta Suzuki (Producer of the SAO series). From the halls of Chaldea in Fate/Grand Order, the guests featured will be Ayako Kawasumi (VA of Altria Pendragon from Fate/Grand Order), Satoshi Tsuruoka (VA of Arash, Gilles de Rais, Caligula, and Spartacus from Fate/Grand Order), and Yōsuke Shiokawa (Creative Producer of FGO PROJECT). Cells at Work! will be in full swing with guests Tomoaki Maeno (VA of White Blood Cell from Cells at Work!), Nobutaka Kasama from David Production (Producer of Cells at Work!), Yohei Ito from Kodansha (Producer of Cells at Work!), and Yuma Takahashi (Producer of Cells at Work!). Meanwhile, Masashi Ishihama (Director of PERSONA5 the Animation) and Kazuki Adachi (Producer of PERSONA5 the Animation) will be representing the stylish game-turned-anime PERSONA5 the Animation. Each event will feature giveaways and more details are available on the Aniplex of America website. Considered the largest anime and manga convention in North America and the second longest running anime convention, Anime Expo will be held at the Los Angeles Convention Center from July 5th to July 8th.

THUSDAY JULY 5th:
Aniplex of America Industry Panel
• Time: 6:00 pm – 7:30 pm (PDT)
• Location: Petree Hall (LP1)
• Do titles like Sword Art Online, Puella Magi Madoka Magica, Kill la Kill, or Blue Exorcist make your otaku heart skip a beat? Then you don’t want to miss the Aniplex of America Industry Panel! Join us as we bring you the latest news on all your favorite Aniplex shows. Score some free gifts just for showing up and prepare to be entertained as we show you the coolest trailers! Plus, you’ll have a chance to enter our raffle where we’ll be giving away some awesome prizes! 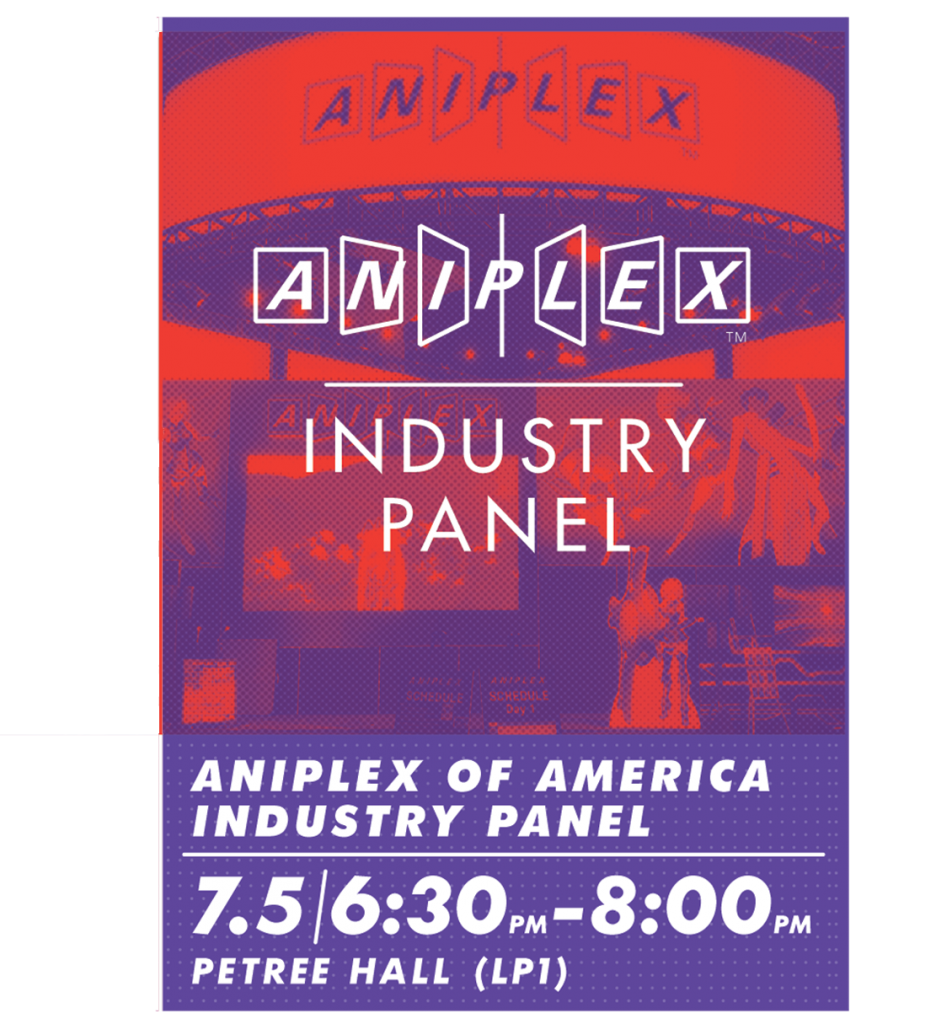 FRIDAY JULY 6th:
Cells at Work! at Anime Expo
• Time: 11:00 am – 12:00 pm (PDT)
• Location: Room #411 (LP4)
• Description: From the popular manga Cells at Work! comes a brand new anthropomorphic anime series produced by David Production (JoJo’s Bizarre Adventure)! From the oxygen carrying Red Blood Cells to the bacteria fighting White Blood Cells, get to know these unsung heroes and the drama that unfolds inside your body! Join Aniplex of America as they explore the oddly relatable and interesting story that is the life of cells with an advance screening of Episode 1 and free giveaways! 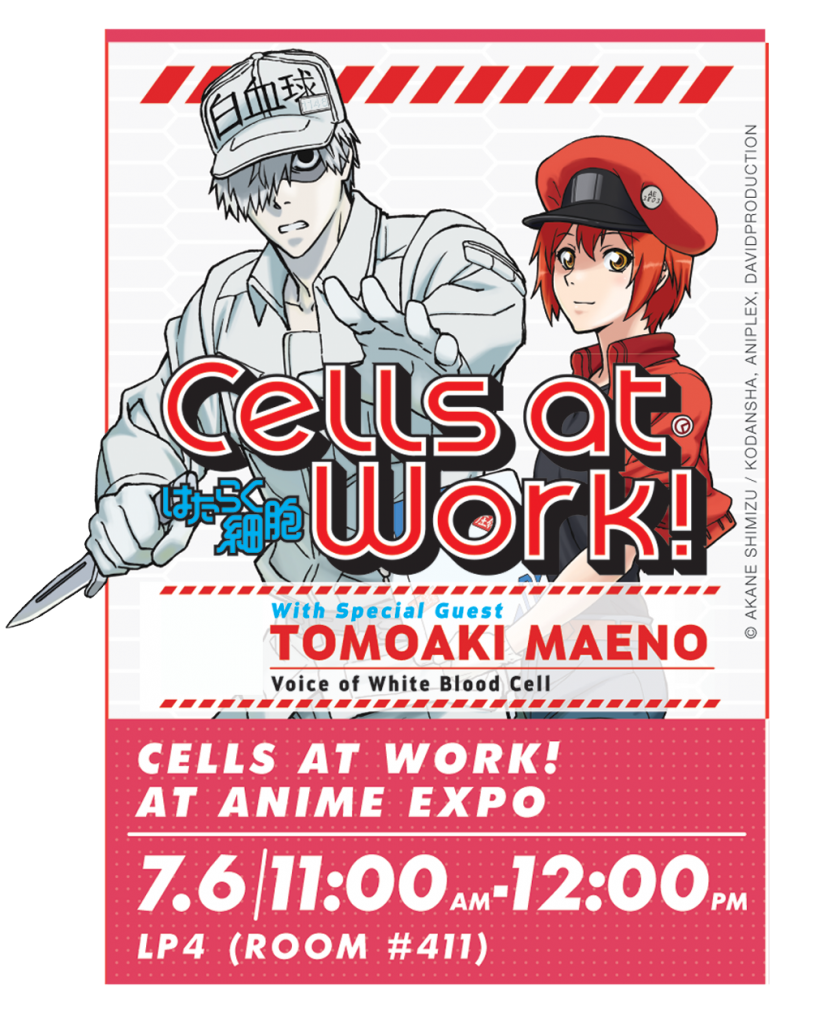 PERSONA5 the Animation Steals Anime Expo
• Time: 4:00 pm – 5:00 pm (PDT)
• Location: Petree Hall (LP1)
• Description: Unleash your PERSONA and enter the Metaverse with the SMASH HIT JRPG by ATLUS turned popular anime series, PERSONA5 the Animation! Join Aniplex of America and special guest director Masashi Ishihama as we go behind the scenes of this highly stylish series. The event will include a special giveaway plus a super-secret guest appearance by a member of the Phantom Thieves of Hearts! 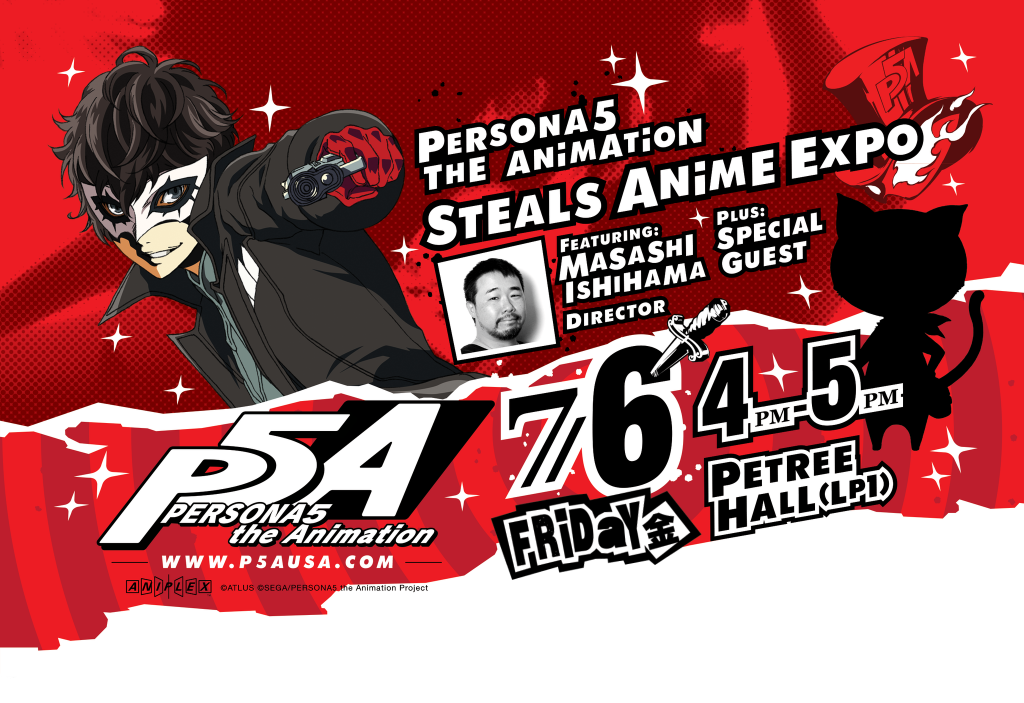 Sword Art Online Summer Festival 2018
• Time: 7:00 pm – 9:00 pm (PDT)
• Location: Petree Hall (LP1)
• Description: Link Start and join us for the most talked about event of Anime Expo! From the perils of Aincrad to the battlefields of Gun Gale Online to the depths of the Underworld, we’ll explore the worlds of SAO, familiar and new! Join us for this very special event as we look at the past, present and the future of anime’s most beloved virtual reality series! 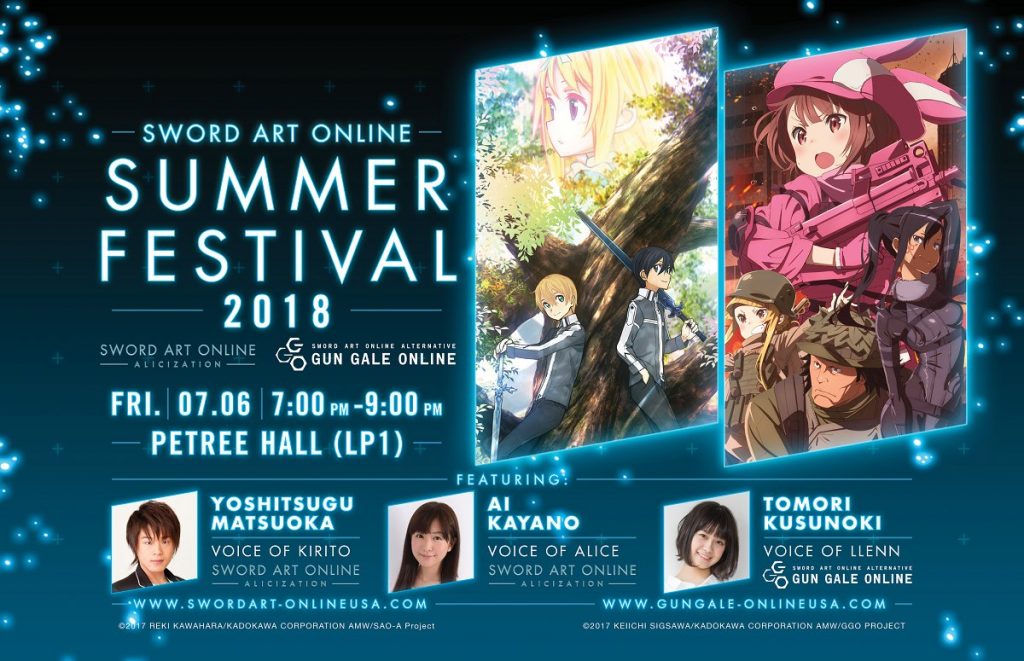 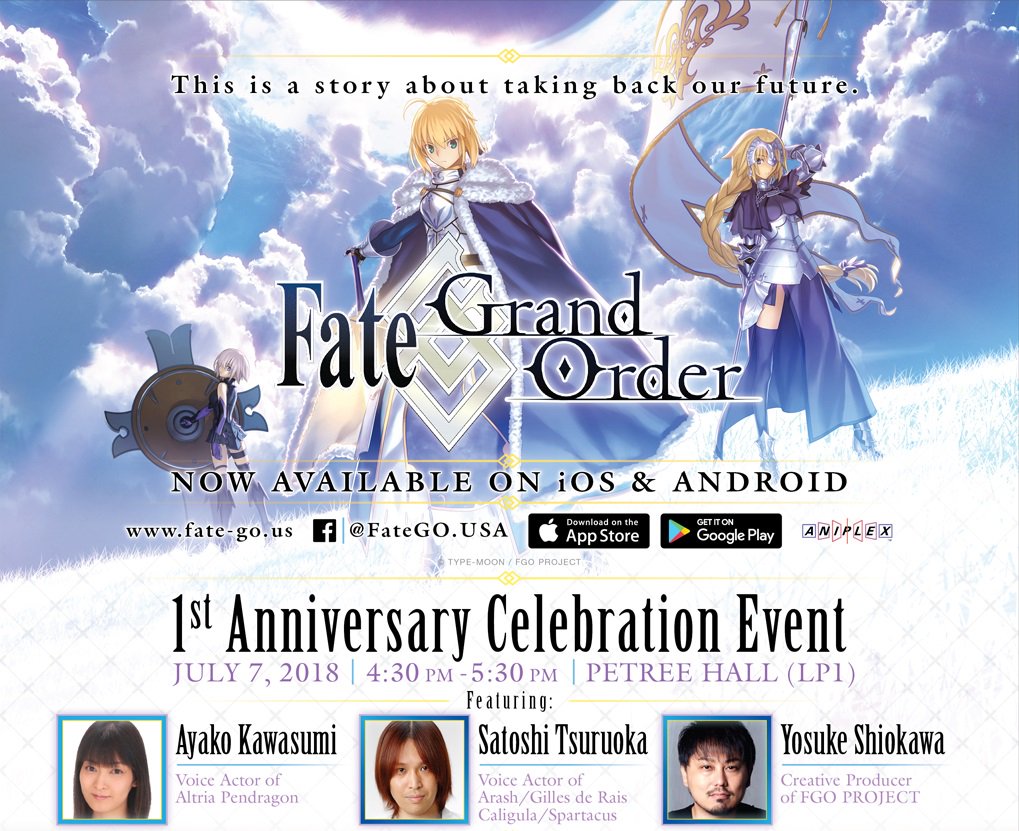