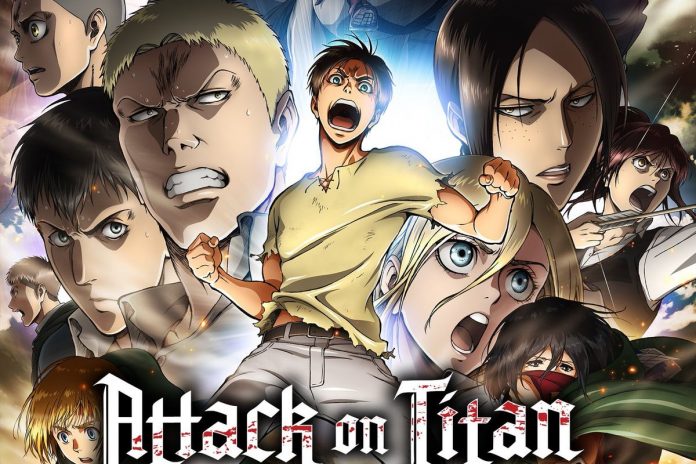 As far as headlines go, that one must grab your attention. How crazy does this sentence sound? Did Toonami jump the gun on Attack on Titan Season Two? I’m sure some of you are thinking “how could Toonami jump the gun on any series?” When something as anticipated and requested as Attack on Titan is available, you go for it as soon as possible. You promote it like crazy and play it for fans every week. For some reason, people aren’t coming in droves to watch this series. It has barely reached over 900,000 total viewers when you look at traditional numbers (as fans are not privy to know what the viewing numbers are on streaming platforms). It’s been happening a lot, and while I’m not worried about the overall product, I’m puzzled at what has transpired since Attack on Titan has returned to television.

Today is your last chance to vote for your favorite #AttackOnTitan recipe! Which one will sate the titans?! https://t.co/pyMNeaoEJK pic.twitter.com/e6VT2Kd28K

I think what I didn’t expect was the massive difference between those who watched this series subtitled over watching it in English. Editor and Chief of Toonami Faithful (“Sketch”) mentioned in a podcast (yet to be released) that the difference between those who have pirated the subtitled version of Attack on Titan as to the English dub is more than 10 to one. That’s massive, as it paints a picture that fans are far more interested in seeing the subtitled version of this series. Now that isn’t because of the whole subs vs. dubs argument (even though that might be part of it which I’ll discuss later). I just think Attack on Titan is one of the weirdest cases of popularity or lack thereof.

We begin with how long of a wait it was to have the second season ready for its audience. It took over three years for season two to come out! During that time, the wait disheartened fans who probably decided to move on to other series to invest in or left anime altogether. Only those who kept up with the manga were rewarded in learning the mystery of the titans. So fans would either read to see what was happening, wait patiently for the next season rumored to happen at some point, or just stop caring entirely. The casual fans that Attack on Titan were able to sweep up, ended up losing interest and moved on to other “fads” that became popular during the lull. I’m sure some came back when season two was announced, but I don’t think as many casual fans cared to return.

Now fast forward to today, where the second season is in full swing (and finished its run in Japan). Fans have been rushing toward Crunchyroll when the newest episode of Attack on Titan was released. That release was initially three weeks ahead of what Toonami could play. Plus, throw in a couple of marathons, and they’re now four weeks and soon five weeks behind. That will delay fans from seeing what happens in what they might consider a timely fashion. I theorize that because it was already ahead by three weeks on Crunchyroll, fans just couldn’t wait and had to be up to date with Attack on Titan. That might speak to how anime fans have become more and more of the perfect example of instant gratification, but if it’s a series you’ve waited for so long, I understand wanting to be up to date as quickly as possible. But because of that head start Crunchyroll had, fans ran toward them instead of waiting for Toonami.

I ultimately put this on FUNimation for deciding not to do a same day dub release of Attack on Titan Season Two. Yes, 10 a.m. on Saturday was when Crunchyroll released the newest episode of Attack on Titan (much earlier than 12:30 a.m.). But I have a feeling that if FUNimation produced the dubbed episodes for Toonami the same day it was being released in Japan, I think things would be different. Fans would only have to wait hours instead of weeks, which might have been a short enough wait for fans to simply wait for Toonami. I understand how much running around the company had to do to dub this series as quick as they did even though it was behind the Japanese broadcast. However, My Hero Academia has been getting a “same day” dub, and I wonder if it’d been better overall if they decided to go with Attack on Titan instead of My Hero Academia. Maybe it was no feasible but there may have been some way to pull off a same day dub for Titan. One can only speculate.

What also has hurt Attack on Titan was the English script (of season one) that has been called into question by many. I think people have enjoyed the subtitled dialogue more than the English script. People have criticized the screaming heard in the dubbed version and aren’t fans of the scriptwriter for the series (that being J. Michael Tatum for part of it). Personally, I had no gripes with either and think that people just go after the scriptwriter as a way for them to say how FUNimation should scout them as a future writer. It’s easy to be an armchair quarterback, and I think that’s what a lot of critics of the English dub are doing. Is it perfect? No. But the constant criticism I’ve seen for it certainly doesn’t help the dub gain more fans.

It’s just crazy thinking that Toonami might have acquired Attack on Titan too fast considering fans want the block to get English dubs as quickly as possible (which they did with this series). They acquired this series so quick  that they were airing promos with Japanese audio. Toonami and FUNimation busted their butts to get this dub ready for television. Talking with Matthew Mercer back in A-Kon, the craziness and hard work that has been put into this dub is nothing short of amazing. It just might have been a better move to wait till Attack on Titan finished its run in Japan. The heart might have grown fonder had they waited on the English dub till after the initial push ended. Perhaps more fans might have gone to Toonami to rewatch it and check out the dub but the mere month difference has the show too fresh in fans memories to revisit so soon. Leaving only new viewers and the most dedicated Toonami viewers to tune in as the series airs on the block.

Besides the dub sounding pretty impressive so far, this season has been fantastic. I have watched the entire season subtitled, and the acclaim that season two is grabbing has to put a smile on a lot of fans’ faces. The artwork has looked the same or better and the creepiness seems to have risen to greater heights. More things felt accomplished this season, and it didn’t take multiple episodes to do that. The story moved along at a much better pace, which made things more enjoyable to the viewer.

The TV crowd doesn't seem to give a darn that Attack on Titan is back pic.twitter.com/R2Mq7Kej1u

Hindsight is only 20/20. How could Toonami predict all that’s happened with Attack on Titan considering how it’s massively popular and some how divisive. Anime fans and fans of the series couldn’t wait and since the subtitled version was at least three weeks ahead and I think more fans would rather be up to date than wait on Toonami’s time, even with an English dub premiere. That’s is unfair to Toonami considering this show was requested so much. That much effort to give the viewers what they asked for ought to be rewarded with better results than this.

C.J Maffris is an editorial writer for Toonamifaithful.com. He might turn into a Titan himself with how much work he’s doing. Feel free to follow C.J on Twitter to talk all things anime and Toonami @SeaJayMaffris