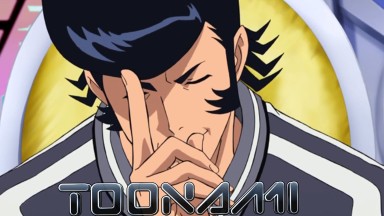 I want to stress something to the readers of the rating dumps here, the forum posters, the podcast listeners and anyone else who takes the time to analyze the P2+ ratings for Toonami every week. While it is nice to have a peek into how the shows on Toonami are doing against the rest of Adult Swim and shows on other cable networks, which is something we did not have for many years, seeing those ratings every week arguably is doing more harm than good. This is especially evident when back-seat television programmers try to use them as a basis for what shows should stay, go, move up or move down the line-up. Such individuals like to use them as ammo to prove the show they like is more valuable to the block or the show they do not like is “hurting” the block and some even aim these shots at the Toonami crew in the Q&As and on their personal social media. At some point a great many of you got the idea that getting 1 million viewers P2+ was the barometer for good. Sure it is great when a show can crack one million in P2+ but when a show does not do that, it is no indication that they are failing to meet expectations even when shows after it out-rate it with P2+. What I feel must be stressed here is while we find these ratings fascinating to look at every week they are not as important as the back-seat programmers make them out to be. To quote the film Men in Black, they mean precisely dick. Alright, that was a bit disingenuous but it is my understanding that no advertisers use P2+ ratings to decide which shows to advertise during because to them obtaining the key demographics of a network are exceedingly more important. All the P2+ ratings prove is that nearly all of the Adult Swim original comedies and FOX reruns still out-rate action even when all the viewers are counted thus putting that tired argument to bed.

Allow me to add a disclaimer at this point. I do not have insight on how television block decisions are made. The above tidbit was conveyed to me by people who work in the industry but the rest of this comes down to common sense. It is not important what I know because the argument has everything to do with what we do not know.

Once again I am speaking from the “common sense” bin when I say networks would not spend hundreds of thousands of dollars to air shows if they were not meeting their needs. Adult Swim already has a sizable backlog of comedies they could be filling more of Saturday with if ratings were a concern. In an interview about the rise of Japanese animation on Hulu, Mike Lazzo the head of Adult Swim stated they air action programming on Saturday night because they wanted to play something different than their usual comedies one night a week. A few years later he brought back Toonami. Massive fan response played a part but do you think the head of a television venue would only do something because of fan demand? Advertisers must have been interested as well. As we have seen since Toonami returned to the air, several advertisers have been willing to sponsor Toonami. This has led to the budget increasing, allowing more shows to be picked up and more animation to be made for the packaging. Those very advertisers do not use P2+ ratings to decide what shows to advertise during. They want to know which shows are doing best with adults 18-34, 18-24 and 18-49 as well as all male demos. That is why Adult Swim makes a point of mentioning when they win those demographics on their weekly press releases. Those press releases may be interesting to us they are intended to be read by potential advertisers as a means of determining which shows, during which they should buy ad-space.

The P2+ ratings give an unfiltered idea of which shows are doing well for Toonami but recently a look at the 18-49 ratings showed while one show beat two others in P2+ ratings that show actually lost to them in 18-49 ratings. Some shows just appeal more to the target demographic than others. On the other hand, there are plenty of cases where shows might have a 100,000 to 200,000 difference in P2+ ratings from the show before them but the 18-49 ratings are nearly neck and neck. Those large gaps we occasionally see in P2+ are not always or even often an indication of a sizable drop in the key demographics. I would go as far as to say that the P2+ ratings fluctuate a great deal more from week to week than the key demographic ratings do but that is merely my speculation based on what I have seen lately for the 18-49 ratings. Along with that, any show airing on Saturday night is at the mercy of whatever the show airing before it managed to draw in viewership. Thus it is hard to fault a show in the first 3 hours of Toonami for missing one million if the show before it barely scraped one million P2+ or did not achieve one million P2+ itself. Audience retention is what matters in that case and any gain over the show before it or the show that aired in that slot last year is a win, especially if the gain is in one of the target demographics. As I mentioned earlier, large gaps in P2+ do not mean the demographic ratings have sizable gaps as well and therefore should not be used to determine if a show is doing well in its time slot compared to the shows around it.

It should also be noted that the P2+ ratings that we are privy too do not include viewership for Adult Swim’s streaming video app on their website or on mobile devices nor does it include delayed viewing via DVR or on-demand. All those additional ways of viewing do factor into the success of these shows. Twitter activity also is calculated separately from television, streaming, delayed viewing and on-demand viewership. As technology advances we have more and more ways to determining the audience response to the programming that is being aired. Some shows do better on their initial broadcast and others do better with delayed or alternative methods of viewing. Not everyone can stay up all night to watch Toonami until the break of dawn but that does not mean they are not watching and being counted by some method.

I would imagine there are other factors that go into deciding which shows to keep, drop, move up or move down. Personally, I would ask these questions: What is the value of the show in the long term? Are we willing to wait for this to pick up steam? Is it beating the show before it? Is it beating the show that aired in that slot last year? What is the cost compared to the other shows? Which advertisers are interested in this show in particular? How can this show foster a relationship with a distributor and in turn bring in more shows? No doubt, there are even more factors to consider than just those. Distributors are looking for exposure for their series that will lead to good sales for the merchandise and the home video release. Some content providers are willing to cut a deal to get that exposure because it will be mutually beneficial to both them and the network. When shows are premiering on the block after 2AM, you can pretty much bet on those being less expensive to air than the shows airing in the 1AM hour. The later a show is in the block the less pressure there is on it to perform. It is no coincidence that the shows that cost nothing or next to nothing to air are usually airing after 3AM. That is by design. If those shows do not draw a lot of traffic, they are still essentially free ratings they would not otherwise have for free without resorting to comedy infusion. Mind you the later into the night the block airs the higher the probability that the P2+ viewership is closer to the 18-49, 18-34 and 18-24 viewership. However, the 12-17 viewership can pick up early in the morning as it did when InuYasha was airing in the last hour of Toonami. There was a time when the 12-17 viewership of Adult Swim action programming was a much larger portion of the total viewership but now those viewers are older than 18 and count toward the target demographics.

Honestly there are days when I think it would be better if we did not see the P2+ ratings for the Toonami shows despite my own curiosity. Do you remember back in the day when we did not think about the ratings and we just watched what we liked, enjoyed those shows, talked about them, and did not worry about whether or not the shows we liked were going to stay on the air? Admittedly a few too many sudden cancellations probably burned us to the point that we worry when we see the smallest sign of a crack in the armor but it is well past time for us to stop freaking out week after week. This is Toonami on Adult Swim run by the people who love Toonami as much as we do instead of the people at Cartoon Network who were all too ready to nix action programming in general. Toonami is not leaving, it has seen constant gains for nearly two years and it is safe to say they know what they are doing with the block. It is time to heed the advice Jason DeMarco and the rest of the Toonami crew give us whenever we ask about how this show or that show is doing on the block. Let them worry about the ratings. That is their job. Our job is to watch, enjoy, and spread the word. Trust that they know what they are doing. They understand the television business infinitely better than any of us and they love Toonami just as much or more than we do.