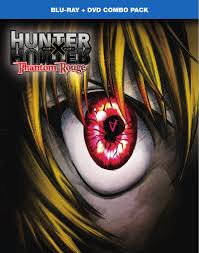 No other show has taken over the Toonami community quite like Hunter x Hunter. I did not think we’d have a show that’s as popular as it is within the small community of Toonami and yet be an anime title that gets marginal responses from people all over social media. It’s quite the spectacle. But a way for Hunter x Hunter to reach more fans is to have more content available besides the anime series. With the manga going on hiatus as often as it does, it leaves one other way for Hunter x Hunter to keep growing, that being OVA’s or movies. Enter Hunter x Hunter: Phantom Rouge (Phantom Rouge), one of two recent movies to be produced. However, is this title worth the price of admission or does it fall into the trap that many anime movies fall into?

For continuity’s sake, this arc takes place after the York New City Arc, but before the Greed Island arc. The story of Phantom Rouge follows our main cast of Gon and Killua as they travel to a city to meet up with Leorio and Kurapika after Kurapika hears a rumor about a member of the Kurta Clan still being alive. Kurapika supposedly meets an old friend (Pairo) from his village while in the city, and his friend somehow steals the hunter’s eyes, making Gon and Killua go on a mission to find the thief. The gang discovers that the perpetrator who took Kurpika’s eyes is a former Phantom Troupe member, Omokage, who creates puppets and steals real people’s eyes to make them strong to fight. He’s plotting to do this only so he can build perfect puppets of his former comrades (of the Phantom Troupe). During the search, Gon encounters a puppeteer by the name of Retsu who decides to help the boys in their search. Little do they know that she’s the sister of Omokage. Once Leorio and Kurapika join up with Gon and Killua, the four (along with Hisoka) face off against Omokage and his puppets for a final battle to help restore everyone who has lost their eyes.

My first thought when watching Phantom Rouge was that this movie would have been better if it was an arc in the actual anime. It gave off the feeling that I was watching an anime arc that was stretched to be about 90 minutes. That isn’t a bad thing, considering I found the movie to be enjoyable in parts. But overall, it just felt more like a blip on the radar instead of the big deal that I usually feel after watching an episode of Hunter x Hunter. I’m glad that we got to see the Phantom Troupe a little more, but we focus more on the original fourth spider instead of the actual crew. Considering what Omokage was doing, I thought we’d see more than just Hisoka getting involved. He ultimately wanted to defeat the Phantom Troupe and make them all lose their eyes to create perfect puppets that would beat anyone. I thought that would spark a more chaotic scene because of the Phantom Troupe (like what we saw in York New City). But instead, it just played out like a typical villain of the week episode you’d get in anime, only extended to be much longer.

What did work for Phantom Rouge was watching Gon and Killua’s relationship grow. We see Killua once again dealing with the demons his brother Illumi placed on him when Killua was younger. It’s something Killua’s entire family seems to believe in, and that Killua will eventually betray Gon or vice versa. Illumi also instilled fear into Killua’s mind whenever he was faced with a stronger opponent. When Killua notices the difference, he tends to turtle up and try to run away. In Phantom Rouge, we watch just how good of an influence Gon is in trying to break Killua out of his bad habits, like the one I mentioned, and his jealousy whenever Gon makes a new friend. But for me, watching Killua grow as a person in this movie made the film more enjoyable. While he still has barriers to break, it certainly feels like the more time he spends with Gon, the better off Killua will be. I think fans will feel rewarded on that front considering how popular Gon and Killua are.

So while other characters like Kurapika, Leorio, and Hisoka have their appearances, it was more about Gon and Killua throughout (which isn’t the worse thing in the world). Plus, we watch as Retsu gets the chance to hang out with the boys. I did always wonder if the group dynamic would change between Gon and Killua if a girl their age was around more often. And it did change to the extent that it felt very real and interesting. I wouldn’t mind if there was more time involving the three, but considering what we find out about Retsu, I know that’s an unrealistic expectation.

I found Omokage’s power to be engaging, with his ability to create puppets and then have the puppets steal eyes from people to become stronger/better. I wouldn’t say it’s a power that made me think that he needed to be in the anime, but it didn’t get to the point where I thought he was annoying or someone who would bring the movie down. Nen’s abilities are one of the more fascinating things you can find in a shounen anime, and with how imaginative Yoshihiro Togashi can be, it’s indeed a spectacle. While the character wasn’t anything special, his power gave him a unique aura compared to other villains you’d see.

When looking at the most significant strength of Hunter x Hunter Phantom Rouge, the English cast continues to do a fantastic job when it comes to bringing life to these characters. I’m not sure how long the central crew has been working on Hunter x Hunter (at this point), but you can tell that they have found their stride when it comes to the likes of Gon, Killua, Kurapika, Leorio, and Hisoka. I find the cast of Hunter x Hunter to be one of the strongest out there, and it cannot be stressed enough how much a great cast improves a series/movie. Even with the new players such as Joe Zieja (Omokage), Kayli Mills (Retsu), and Laura Stahl (Pairo), you’d think that they had been part of the series as long as the mainstays have been. As I’ll get into later, I found this movie rather boring, but I do think that the acting was the best part of this release. Both the actors and directors know what to do to bring the best for fans, and I think fans in the U.S. will be happy with the final product.

But the main weakness I found in Phantom Rouge is that it doesn’t do anything spectacular. You can tell the production was upped a bit, but not to otherworldly standards. The story was a generic one that felt like it belonged in the anime itself. The villain had standard motivations. Everything was just ordinary. It didn’t “wow” me and it didn’t feel like I was enjoying what I was watching. It felt like it was just there and didn’t do much to make me invest in this movie. And that can be a huge problem. Sure, fans will enjoy the fact that there is more Hunter x Hunter content to watch (something that I am pleased about). But when it feels as if I’m watching the anime, without it being episodic, it felt more like a drag than the usually exciting feeling I get when watching Hunter x Hunter. So enjoying this film will depend on how well the movie does to hold your attention, and for me, it didn’t do that very well.

However, that’s the only complaint I have about Phantom Rouge. It is a big one, and it is enough to bring the final score to a more pedestrian level than Hunter x Hunter usually gets. But it’s important to note that if I had trouble paying attention to the movie at points (due to it being boring), I wonder how others will view it. The reaction will be mixed, but I find myself sighing in disappointment that it wasn’t as much fun as I was hoping. I have my doubts about pitching it to air on Toonami, especially since movies are a thing of the past. I know some fans would love for movies to return and think that Phantom Rouge is a logical choice. All I’ll say is that if it’s cheap and won’t hurt Toonami to air it, then they should. Otherwise, there are other movies that I think do more to keep fans feeling engaged that Phantom Rouge did for me.

Thankfully, for the home media release of Phantom Rouge, other goodies were added in the Blu-ray. VIZ Media added extras like an English cast interview, which included the leading group of Hunter x Hunter in separate videos. Also included are a Japanese Red Carpet Event video, Japanese Cast Interviews with Umika Kawashima (the Japanese voice of Pairo) and Naohito Fujiki (the Japanese voice of Omokage), an art gallery, and some trailers. The release comes in a standard Blu-ray case with a cardboard slipcover, which has some spooky art showing Kurapika’s red eyes (which I thought looked pretty sweet).

In the end, I feel that Phantom Rouge is a safe movie for Hunter x Hunter. I find it made itself belong in its own arc in the anime. Honestly, just cut it up in 24-minute intervals, and you’d probably have a couple of episodes to add to Hunter x Hunter. But I ended up feeling bored with how long this episode was. It didn’t do anything to separate itself from the series, so instead, you are watching a filler arc that does very little for the overall story. And that’s a feeling I don’t want to have when watching a movie. I will say that the English cast continues to shine and the goodies included make the purchase worthwhile. But when it comes to something like pitching it to Toonami, I’d suggest looking elsewhere. Instead of making a big play to become extraordinary (or fail miserably) the movie chose a safer route. Meaning nothing was terrible, but nothing stood out either, which is Phantom Rouge’s undoing.

Pros: English cast continues to shine which includes the new voices who joined the Hunter x Hunter family; Cool extras added in the home media release; Interesting to see the friendship of Gon and Killua grow with girl added into the mix.

Cons: Movie doesn’t do anything spectacular; felt boring at times; felt like an anime filler just stretched out for a movie.