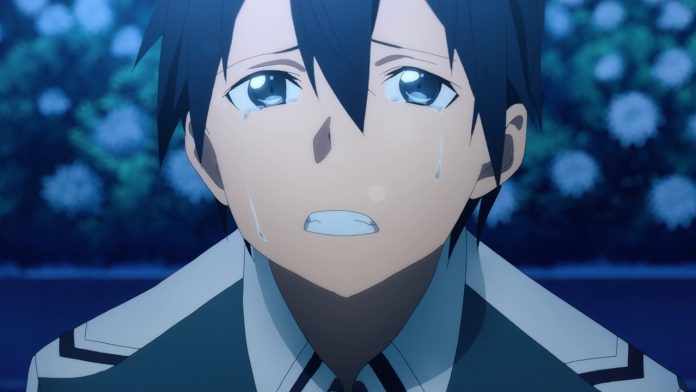 Sword Art Online (SAO) is often a contentious show in Toonami fan circles with good reasons to love it or to dislike it. Usually, I see valid criticism thrown at the show, and Sword Art Online Alicization, in particular, was rough, even for an SAO fan like myself. But War of Underworld has been a considerable step up from the previous season. Sword Art Online is at its absolute best when examining the effects of trauma on people, and it’s a topic I wish was more a point for a discussion on the series. Kirito is often critiqued as an overpowered character with no distinct weak points. Still, I do believe there is more to him and believe that only thinking of him exclusively as a Gary Sue is a disservice to the character. No one is under any illusions that Kirito is going to die. However, he may fail to save someone. These events tend to affect him profoundly to which I’m shocked others don’t mention more often.

Up until now, my favorite season was Phantom Bullet, thanks in large part to Kirito partnering with a new character. We follow Sinon, a girl dealing with PTSD, and Kirito, who was suffering from survivors guilt, both having to overcome these debilitating weaknesses to come out victorious (or alive, in Sinon’s case). We’d seen smaller glimpses of Kirito’s trauma, particularly with the first season where he is unable to protect the life of his friends. Kirito is then reminded of his failures by a recording afterward, thus paving the way for him to be distant due to the trauma he faced at that time.

Outside of that event and the events of Phantom Bullet, we rarely got to see this side of Kirito so thoroughly detailed. And because these moments aren’t common, it has led to the typical critique that Kirito is perfect and an overpowered hero. While I had my fair share of issues with the last season, Sword Art Online Alicization, one of the things it left us with is further showing the psychological toll loss and being unable to save those Kirito cares about has on him. Eugeo was the stand-out character that season and losing him hurt, but seeing the effect it has on Kirito’s psyche has been equally heartbreaking. Sure, his condition is partly due to the damage that was done to his weakened Fluctlight when the power got pulled on his life support system. But the way he’s been clutching his and Eugeo’s sword this current season has been proof that he’s suffered greatly for that loss.

Kirito isn’t the only one to have dealt with trauma in the series, as it is a recurrent theme for even the secondary cast. Most of the cast has the shared trauma of living in a death game for three years against their will, but they all exhibit issues as well. Be it Asuna unable to believe in herself at first, Silica targeted by a guild of murderers, or Lizbeth getting hurt by unrequited love, the core cast all seem to have troubles large and small. But it’s how in-depth we dive into these issues that make them fascinating to watch. The more we learn about these types of traumas that have molded our cast, the more we as viewers can watch them grow in satisfying ways.

In Fairy Dance, we shift away from a sole focus on trauma, and instead, Kirito is in a mad dash to save Asuna. Due to the loss, Kirito has had to face in Sword Art Online; he was not going to lose another person he cherishes. Instead of focusing on the possibility of losing Asuna, he creates a powerful motivator to make sure he wouldn’t fail. Thanks to this tonal shift, we see a more focused Kirito with saving others. This newfound focus is not limited to just saving Asuna, though. Initially, Kirito is being helped by Lyfa in his search, but during this, she ends up embroiled in an internal conflict within her clan. Initially, Kirito is forced to assist with this to further the needs of his own goal; however, when he is given a chance to push forward on his own, he refuses to abandon Lyfa to her own struggle. This mutual helping out each other solved problems other players were facing and ended up helping Kirito save Asuna. It’s thanks to this tonal shift to where the audience has a chance to see what I find defines Kirito as a character, that being his heroism.

Kirito’s heroism seems to be contagious, be it that moment in Fairy Dance, or a more recent event. Seeing Ronye and Tiese show up in War of Underworld, there to protect Kirito because of the profound impact his heroics had on them back in Alicization blew my mind. I was not expecting this moment at all, and it makes one think about the unexpected impact our actions have on each other. This development forced me to realize that’s been an overarching theme of this entire season. Kirito may be semi-comatose and unable to assist everyone. However, his actions and heroism in Alicization has inspired others to do follow his example. This inspiration is evident with Alice (specifically Alice Synthesis Thirty, the Integrity Knight) herself from the beginning; Kirito’s actions have overtly impacted her character arc. She was always a heroic knight with integrity (befitting her title). But she began to see that Administrator was evil towards the end of Alicization and that Kirito was fighting for the populace. But in War of Underworld, she has been shown as being protective of Kirito, and of being a bit war-weary, yet being unable to stand down when it came to it.

Beyond Alice and even Tiese and Ronye, we see profound effects on other Integrity Knights based on Kirito’s actions. The best example of a direct connection is Fanatio, who fought with self-loathing for being a woman (as well as hating others who wouldn’t fight her at full strength due to her gender). Kirito fought her as an equal despite realizing she was a woman, and this has had lasting effects on her. This change allowed Fanatio to move beyond worrying about her gender and led to her accepting herself for who she is while still staying a strong warrior.

This continual chain connection goes one deeper, with the initially cowardly character of Renly. Renly never met Kirito, and so he has not been directly influenced by his heroism. Renly, like much of the supporting cast, is shown to have his own trauma – being cast aside and frozen into cryostasis by Administrator for being unable to use Armament Full Control. Being rejected gave him a massive hit to his self-confidence to the point that he cowered from his duty in supply tents. A less than healthy response to trauma, but it’s important for us to see this response just as much as it is to see a more positive outcome like we often see in this series. In real life, we don’t all power through trauma without a second thought, and Renly is a stark reminder of that. He’s also a reminder that just because we don’t power through, that doesn’t mean we are hopeless. While cowering, Renly meets Ronie and Tiese, and sees them willing to fight to protect Kirito. Seeing this awakens his heroism (and Armament Full Control) as the goblins attack the supply tents, he finds himself fighting despite his fear. None of this would have happened had Kirito not fought past his trauma back in Alicization, and so even to someone Kirito has never met, his own perseverance over trauma has helped another to do so.

I think this is what Sword Art Online does best. We frequently see Kirito and other characters overcome traumatic situations, even if it doesn’t happen right away. Kirito can be derided as an overpowered underdeveloped main character, but to do so misses what makes the character, and the series as a whole, shine. Kirito overcomes his trauma heroically, and so do those he directly and indirectly contacts. Ultimately, Sword Art Online shows us that no matter what trouble or problems we’ve been through, no matter the damage we have, we DO have value. We CAN overcome obstacles. Now, in War of Underworld, we can also see that we can uplift others, even ones we never meet, just by being our best selves. It’s a message and theme that has solidified my love for this series.