Legend tells of a boy who was born as his mother was burned at the stake, accused of being a witch. It was then that a Makai Knight appeared out of nowhere to save the boy, never to be seen or heard from again. While I’ve never actually heard of this story in any classical reading college course, GARO: The Animation acts as if it’s as well known as the Knights of the Roundtable fable. Fans watching this series are treated to a similar sense of those days. It’s a fun adventure, but can it stand up to other series that portray Medieval times, like The Seven Deadly Sins?

I wasn’t sure what to expect when I was asked to review GARO: The Animation Part One, considering I hadn’t seen it before. However, I felt I was in for a treat because FUNimation decided to show a dub premiere of the first two episodes at Anime Boston. Fans were pumped and I was crushed that I had to miss it. What we get is a beautiful series that makes you hunger for more, since this is only the first half of season one. It felt as if I was watching “The Crucible” set in Medieval times, or in simpler terms, The Spanish Inquisition. The story begins with a father (Herman) and Son (Leon) who travel around the world to find evil spirits called Horrors. Their battles are used primarily for training Leon to master the GARO armor, which legend identifies as the savior of the Valiante Kingdom. We watch as the Valiante Kingdom turns from a prosperous place to one where people fear for their lives due to Mendoza taking power with the rightful king deathly ill. Leon, Herman, and their friends return to this kingdom where Leon’s mother was killed for personal reasons to kill Mendoza.

The entire atmosphere is a bonus, because I enjoy the somewhat clichéd story where anyone can be falsely accused of being a witch, and is therefore living in fear of the accusation (this might be my Boston bias, being so close to Salem). The story of how this world is corrupted by the fear of witches drew me in, and it’s also dark enough to allow those who aren’t familiar with the Salem Witch Trials to get a sense of that period. The series itself was riveting. 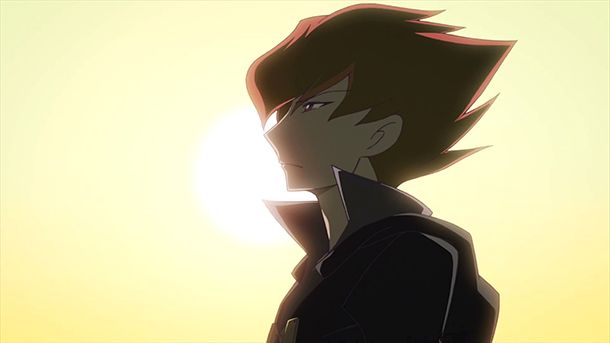 The first thing in the series that caught my eye was the artwork, specifically the characters. The sharp outlines and colors mixed in, and how dark and cloudy everything looked made it spectacular. Close-ups on people’s faces were even more of a treat, showing a great level of detail. Mix that in with the scenery and this series is a visual marvel. It’s important to have breathtaking landscapes in a world, because it gives the show the authentic feel that you have been transported back in time. However, the static shots of characters and the area weren’t the only visuals that caught my attention.

During some of the main action scenes we are treated to 3-D fights when Makai Knights don their armor. I was at first worried about how awkward 3-D fights in 2-D anime can look, but I dare say that the 3-D fights looked better and less awkward than the 2-D matches. Whenever we watch a Makai Knight face a Horror, or other Makai Knights, the motion looks fluid and seamless. It was nice compared to how choppy it has looked in other series I have seen. What felt odd was how rough the animation looked when the action was 2-D. I enjoyed some of it, but overall it wasn’t as clean as I would have expected, given the level of detail in other parts of this series.

During battles, the music felt like merely an add-on; it never wowed me or enhanced what I was looking at. I hope this will improve during the second part. It was disappointing, because while I’m not the biggest fan of using music to evoke an earlier time, when it works it works (Fairy Tail’s Dragon Force and Seven Deadly Sins OST come to mind). It wasn’t bad to listen to, just not memorable.

Regarding the story, some parts were boring, particularly Alfonso’s training. This instance occurred in episode six, where we see Alfonso train to become a Makai Knight. I just didn’t care to see where he started due to how uneventful it felt for me. While it could be argued how important his training was, it wasn’t depicted in an exciting way. Even the battle he endured against a Horror felt anticlimactic. Plus, that same arc about his master, Rafael Banderas, training him felt incredibly rushed. Without giving too much away, he is seen a few times during this arc and then never appears again. And Alfonso’s growth during his training was VERY rushed, from the point when he cannot handle a Horror (episode six), to the end of the 12 episodes, when he is supposed to be regarded as a great Makai Knight. It just wasn’t believable.

Also, I needed more Ema in this series, as she was my favorite character. It was interesting how she turned up to help Leon and Herman at different points, and how she left viewers wondering so much about her. I don’t think she needed to be put on the screen ALL the time, as the added exposure could have diminished her character overall. But she left me wanting more than what we got in the first part. I’m looking forward to how her relationship with Herman and Leon develop in future episodes.

The casting director deserves a round of applause from what I heard (as well as Caitlin Glass’ job as dub director). Fans get to hear veteran favorites like Monica Rial (Ema), David Wald (Herman), and Vic Mignogna (Mendoza) who all did a fantastic job with their roles. Some amazing newcomers, like Ricco Fajardo (Leon) and Justin Briner (Alfonso) also were excellent in their lead roles (both were nominated for Behind the Voice Actors’ best up and coming male voice actor, which Ricco Fajardo won). It was also revealed that much of the cast in GARO: The Animation are of Latin descent (in an episode commentary), which added a sense of realism for viewers with respect to the pronunciation of names and cities. That sense of realism is very rare, and was something the dub cast greatly enjoyed.

I cannot give enough praise for Mignogna’s rendition of Mendoza. I haven’t watched a villain that truly captivated me and that I wanted to see fail in a long time. Mignogna matched his serious and calm inflections to come off as cold and calculating. Those types of villains get viewers’ blood boiling, and Mendoza does just that, particularly at the end. However, when Mendoza needed to become more dramatic, Mignogna also performed amazingly well. I can’t say enough about it; it was flawless. Not to be outdone, David Wald’s performance as Herman was also fantastic, mostly due to his amusing banter when talking to women. I’m sure Wald had fun in the booth when Herman is running around naked (after getting tricked), and telling his female adversary that she can look at him all she wants and realize what she could have been missing. Herman had me in stitches and I’m sure many will enjoy the humor he brings.

As for the product itself, it comes in your standard FUNimation DVD/BD case with a slipcover. The extras include commentaries, clean opens and closings, as well as a special episode where the Japanese voice actors reminisce about the first part of the series. The commentaries and special episode were all interesting to watch, as well as Ricco’s enthusiasm in the commentary for episode eleven. I highly recommend giving them a listen.

All in all, I’m very pleased with GARO: The Animation Part One, and I’m excited to see where Part Two takes us (which won’t come out until August). While the show has many themes that people have seen over and over, I think GARO succeeds in a lot of areas. The fighting and storylines are gripping enough to make viewers feel positive about this series. If anyone wonders if this is a show that could potentially air on Toonami, I would respond with a resounding “yes”. It’s dark enough to grab people, but truly has a little of everything that anime fans will like.