If you are reading this, you should be jealous.

I know what you’re thinking…

…but I can’t perform at your bachelorette party! I’m married!

(Besides, I wouldn’t make it up the pole without incentive! Incentive as in Homemade Peach Cobbler at the top!)

You should be jealous because I just met the dopest group!

For those of you who have been lucky enough to visit Realms Con to see Concept Galaxy, you know exactly what I am talking about.

To the untrained eye, they appear to be a group of cosplayers. Until you meet Chuck, who moonlights as a dancer and auditioned for America’s got Talent. Or Katy, aka Izzy Estella (I just figured this out, duhhh) who is the resident social media mastermind. How about Mia, who is an amazing Graphic Designer. Not to mention Peyt, the puppetmaster.

Then there’s the glue that holds everyone together, the founder of the group, Stephanie Chateau.

So tell me Stephanie, how has your vision evolved from the inception of Concept Galaxy until now?

Stephanie: For me it started when I told my bosses at Universal I wanted to learn how to be a director so I can make my own theme park some day because I was young and foolish. I had no idea the actual work that goes into that. They suggested that I start small. Run an interactive event like a Dinner Theater or a scavenger hunt. I started with a scavenger hunt and it did well. I got invited to a few other states to do it and then one convention suggested I do a full cast and auditions turn it into a show. We became a group in 2006, instead of just singular scavenger hunts run by me. so think it’s 9 years old unless i’m bad at math which is possible, since I downloaded Windows 10 in my brain…

Concept Galaxy evolved from there into the show we do every year at Realms Con in Corpus Christi, TX.

Stephanie: I’ve always had other jobs on the side, even before I was working at Universal. When I stepped away to work on what I wanted to work on, I got an art portfolio together and worked at a metaphysical coffee shop for a while. Now I’m getting education and I work for company called Clikity Split. The owner, Jim Clouse, is trying to provide better travel/transportation/booking services for people who do conventions, conferences, trade shows etc.

How old are you guys? You all seem fairly young

Stephanie: I concur with Peyt

Mia: I rode pterodactyls to school as a wee child.

So your ages are guarded by the Knights Templar?

Peyt: but they are bald

Chuck: There are Christian monks too

Alright! a group full of geeks yesss I love it! Who’s into comics/manga?

Chuck: I do all nerdems

Peyt: I grew up with DC, Evan got me into Marvel, but I fell out of the comics boat a while back. I watch One Piece and some anime. I’m mostly Video game sorta dork

Evan: I like Marvel comics and a few animes

Mia: I am mostly a PC gamer and watch Sci fi stuff, but I enjoy a number of old school anime titles

Katy: I specialize in anime. Comic books are my weakness though ): *Adjusts Naruto headband with pride*

Chuck: I love video games especially since I work at GameStop

Peyt: Why is it called GameStop and not “Games? GO!”

Katy: Concept Galaxy is pretty diverse in what fandoms it represents is what could be concluded

You guys seem like a big happy family that’s awesome

Katy: Coming together with a common purpose and entertaining/interacting with a crowd of people just really gets the energy going

Mia: It really is like a family. We all try to have each other’s backs. It’s not about a single person ever but a good show and everyone having fun and getting to do what they feel creatively inclined to. That sounds so cheesy but it’s the truth.

Stephanie: he does the modern stuff too right? All the robot moves hehe.

Chuck: I do all styles of dance from ballet to break dancing

Ballet is hard as hell to do

Chuck: It very much is!

Who else has dope side hobbies?

Stephanie: Peyt makes puppets and all kinda of costumes.

Chuck: Even is going to school for film

Stephanie: Oh snap I forgot to add Miranda into the convo. I knew I was forgetting somebody. Miranda studies all things Disney and Dreamworks

Mia: I sing, do costuming, and graphic / Web design – mostly front end stuff, then am pretty obsessed with nutrition and fitness

Chuck: I was on America’s got talent once for dancing. I was just happy for the chance. Especially since it was like a year after my accident.

You had an accident Chuck?

Chuck: I was hit by a car two years ago

Oh wow! And you still dance? That’s a hell of a story I hope u tell it that’s inspiration!

Chuck: I just do things, nothing special. Without concept galaxy I would not be where I am today. Everyone really helped me afterwards. The people in this group are inspirational and the way we care for each is more inspirational than me!

Chuck’s final statement really echoed my thoughts about this group. There was so much more to this conversation than what is posted here! I felt as if I had known these guys for years. This felt more like a family gathering than an interview! I sincerely hope you guys check the links below of Concept Galaxy because they are truly an awesome group!

Here is a video showing Concept Galaxy at RealmsCon this year! It highlights a lot of the fun silly memorable moments. 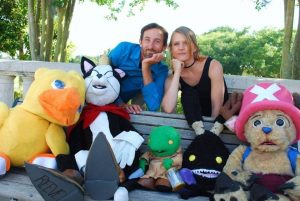