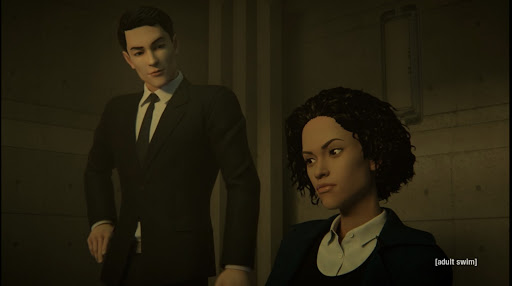 On the latest episode of Blade Runner: Black Lotus, Officer Davis is under investigation for her potential involvement in the deaths of Senator Bannister and Police Chief Grant. Everyone’s favorite detective seems to be in the crosshair for someone (or rather due to a couple of people) due to her sharing her findings in a case report to an oversight committee. Davis would have to endure an interrogation by a new character, Investigator Alan Chen, in what Davis hopes can clear up all the misunderstandings and stop Black Lotus’ murder spree. Sadly due to circumstances outside of the control of Adult Swim, this episode was probably met with more criticism than usual, with it being more of a recap of what’s happened (following a marathon that aired last weekend). Still, this episode gave a nice balance of retelling the events to this point of the series and sharing critical new information from Officer Davis’ perspective, and I’m thrilled this character received more screen time.

In what had to have blindsided many fans, viewers were treated to a recap episode disguised as an interrogation. Questioned by a new character, Investigator Chen, we get to learn what Officer Davis thought since the chase for Black Lotus began after the death of Senator Bannister. We see what led Davis to seek after the gang Elle destroyed and how confident she is of Elle being a replicant due to the damage in her wake. The connections Davis made in investigating Elle in the early parts showcases her top-notch intuition, and I understand her frustration in being dismissed when things are adding up clearly. And while Chen seems to be taking her seriously, he appears to find Davis’ findings a bit hard to believe.

The chat between the two officers had a lot more tension than I initially realized. Chen uses the information that Davis isn’t part of the Blade Runner program to discredit her during the interrogation. Davis even admitted herself that her intuition got her in trouble. But this is an easy tactic pulled by those part of a cover-up or dirty themselves. Even after all of the evidence that faces the police about Elle’s status as a replicant, they still question what Davis showed in her reports. And the commentary showcased the issues women in workforces like police work deal with, which shouldn’t be lost by viewers. Female employees will often have their past brought up to discredit and is an example of what they face to be taken seriously. I believe bringing up her short time in the Blade Runner program is being used to discredit her investigation to keep the doll hunt a secret.

I wonder if Officer Davis will be used as a scapegoat because as Chen was pressing questions about the deaths of Chief Grant and his wife, it sounded like he believed Davis was the one responsible. Chen was curious about what information Davis gave Grant and why none of what she was saying made sense to how Grant acted before he died. Officer Davis has a theory involving replicants, but so far, Chen just isn’t listening, which is frustrating to see.

Finally, we get into some new content where Davis opens up her theory on Elle’s ability to fight off a Blade Runner and not keeping a low profile, like the Nexus 8 model. It calls into question the production of new replicants even though production was banned in 2023. Elle’s words of not starting the killing caused Davis to begin her investigation all over, which probably led Chen to her.

While many would think that Davis reached a dead end, she began looking into Hooper, remembering his name being mentioned on the night of Senator Bannister’s murder. Davis found an interesting piece of information regarding an altered flight that led to a Nevada desert.  Changing a flight plan is a bit suspicious, but that area is off-limits to the general public, but sadly, no further explanation is given. Realitively clear why the desert was chosen for the doll hunt the more Davis uncovers. Davis goes on to disclose Grant and his wife went on vacation at the same time as these flight plans and believes Bannister was also in the desert. Davis and Chen follow the coordinates to the disturbing scene of bodies buried by the desert sand. Chen agrees to send a team to retrieve and identify the bodies, believing this discovery will change Davis’ career but not how anyone expected. Davis was put on leave for three months for displaying delusional behavior, making viewers think this is the end of the detective’s journey. But don’t let this setback fool anyone; Davis would appear to make a connection with her investigation to The Wallace Corporation. Especially since the company is putting its Tyrell Corporation assets up for sale, as Wallace Sr. indicated in the previous episode, to distance itself from any connection to manufacturing replicants. Davis’ “delusional” diagnosis is another tool used to make her look incompetent and to keep her far away from this case since it would seem she’s on the right trail! To add the cherry on top for this episode (which needed it), it ends with the perfect song to play as Officer Davis walks off-camera, “I only listen to my intuition. She’s the only one who tells me the truth.”

In all, I enjoyed this episode since we were able to see Blade Runner: Black Lotus from a different perspective than before. While we have our general battle between Elle and the Wallace Corporation, seeing Officer Davis play the third party of this struggle I felt was needed in the overall picture. Officer Davis and her determination will stop at nothing to find out the truth about Elle and her connection to the people she murdered, a staple for many cop drama series that has been wildly popular in western television. The numerous marathons of this series took a lot away from what this episode was made to do, which I’m sure was not the intention, but we are in uncharted territory, which could hurt Blade Runner: Black Lotus more. Hearing Samira Wiley (Orange is the New Black and The Handmaid’s Tale) was greatly appreciated. She continues to be outstanding and gives fantastic performances with every episode. Wiley had remarkable chemistry with Chun’s performance as Investigator Chen, which made for a better episode from the voice acting perspective, making it feel a lot more real/believable in the process. Thanks to the trailer Adult Swim recently published, we will be returning to the main story, and I hope things do pick up to help raise the spirits of fans who were miffed during the debut on this latest one.