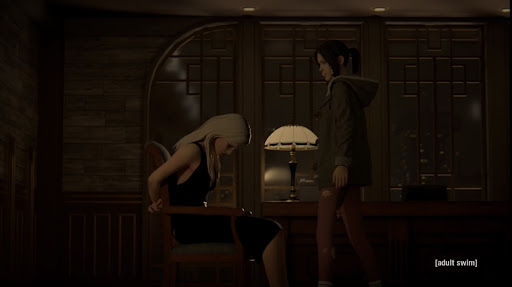 This week gave fans the best episode to date as the action and suspense accelerated in Blade Runner: Black Lotus! Elle is a step closer on her path for revenge as she makes her way to Grant’s home, which leads to a dramatic standoff and battle that many had to be excited to see play out! I understand now why Josephine wanted more security, considering how deadly both Elle and Marlowe were in their skirmish. And let’s not forget that apparently, Joseph KNOWS Marlowe. There’s a lot to take in, but this episode felt so strong for me, and I hope that the series can continue this momentum.

Josephine frantically calls her husband reporting someone outside the window as the episode begins. Grant finds it hard to believe considering where they live, but it would appear that he does take what his wife says seriously and makes his way toward the apartment.  Unsurprisingly to viewers, Josephine’s suspicions were correct as Elle makes her way to the apartment entrance and quickly disposes of the guards in the lobby (using their tasers). This short battle served as the appetizer for things to come as we were able to see some fun fight choreography to get the blood pumping. And it made one thing clear. Elle means business on her quest for revenge.

Meanwhile, the police escort Joseph back to his apartment as Marlowe arrives for a surprise visit. Many might have felt this would be the death knell for Joseph, but Marlowe calls Joseph “buddy” in a rather friendly tone revealing to viewers that these two know each other (even telling his colleagues to release him)! Sadly the conversation between the two was short-lived, as Marlowe is requested to arrive at Grant’s apartment to kill Elle. Marlowe readies his weapon, and it appears to be a larger version of the gun Joseph took away from Elle in the previous episode. And I can’t help but wonder if Joseph was a Blade Runner, which would explain his reluctance to help Elle since she’s a replicant. I enjoy these clues into Joseph’s past, leaving me eager to learn more, and I hope we get the full story by the end of the season.

Back at the apartment, Elle finds and confronts Josephine for being a participant in the doll hunt. Elle chases her down, and while our heroine did hesitate when it would look like she was going to murder Josephine, Elle instead ties her onto a chair (at gunpoint) to try and get some answers. Desperation is taking over Josephine, saying she was a spectator of the doll hunt to gaslighting Elle into thinking the memories of the doll hunt weren’t real. Her statements again reinforce this conflict within the series of what’s human and what isn’t, with Josephine trying any trick to save her life and get her out of this situation. But justice will always catch up, and Josephine will have to pay after hunting Elle and other replicants. But she’s even more despicable (like her husband) trying to make it seem like Elle’s experience was an illusion because of her beliefs about  replicants. Luckily, Elle doesn’t back down and continues her questioning, learning about a man named “Dr. M” who invited everyone to the doll hunt. Elle tries to get more answers since Josephine seems more talkative but is interrupted when Chief Grant enters the room.

At last, tension is at an all-time high with Elle and Chief Grant face to face, and Elle redirects the questions (and gun) to him about the doll hunt. Grant claims ignorance on who orchestrated the whole thing and tried to de-escalate the situation to save him and his wife from Elle’s vengeance. What I found interesting at this point is Grant’s speech about “replicants, not people” when Elle references herself and other victims of the hunt as people. It further demonstrates how replicants are seen as objects to the Grants. Grant also mentions the existence of replicants being illegal, begging the question, why were Elle and the other replicants created knowing this fact? It was hinted that Grant comes from a family of hunters, and with animals extinct, he needed something to fill a void. I’d offer maybe to take up a new hobby like poker, chess, something that doesn’t involve illegal activities (just a thought). The consequences must be life-altering, explaining why Grant is working hard to cover Elle’s existence.

Grant attempts to save his wife by trying to wrestle the firearm away from Elle. Josephine tries to warn Grant that Elle is carrying a sword, but it’s too late as Elle drives it through his gut! In his last moments struggling with Elle, Grant’s gun discharges and hits Josephine in the chest. Josephine’s dying words accuse Elle of not having real feelings, which goes back to the moral question of what replicants are. Officer Davis (who was suspicious of Grant’s sudden departure from the precinct and decided to follow him) bursts into the room to find Elle with two lifeless bodies. Before Officer Davis could make an arrest, Marlowe bursts through the window and begins his assault on Elle (standard Blade Runner practices).

An epic fighting scene takes center stage between Elle and Marlowe, which was beautifully choreographed as both are not backing down from each other. Marlowe’s ability to counter Elle’s attacks showcased his skills as a seasoned Blade Runner, and Elle’s evasive maneuvers were as eloquent as a ballerina. This battle was the highlight of the season, and I hope to witness similar scenes in future episodes. The brawl ends with Elle sparking a gas explosion exposed from a bullet. Elle flies out the window to make a fantastic escape (outside of the building) as Marlowe drags an unconscious Davis out of the burning room once he gets to his senses after the blast. Josephine’s words caused Elle to ponder over the emotions she’s felt all of this time, from love to revenge is how this episode finishes. I think these words will play an important role as she moves on to get more information regarding her next target.

I found this episode to become my favorite so far, giving fans the perfect balance of action and drama. Elle’s target list has shrunk, but she still has a target on her back, with both Marlowe and Officer Davis aware of who she is. The dub cast brought the necessary emotions to this episode, with Peyton List (Josephine) standing out with her performance. List made Josephine’s brief appearance in the season memorable by delivering powerful words causing Elle more pain than the gas explosion. We’ll get to see the aftermath of what went down at the Grant residence and see if Elle moves on to find out the identity of “Dr. M.” I hope next week’s episode brings the same excitement!