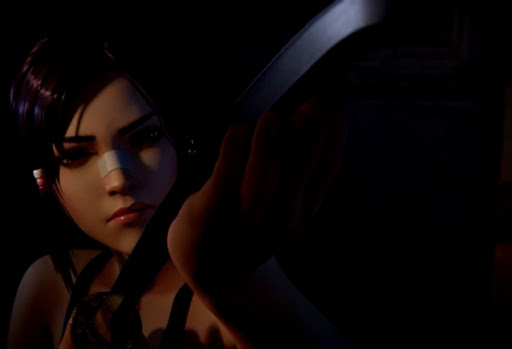 Elle’s painful memories have been restored, and she is ready to seek revenge on those participating in the “doll hunt.” Our makeshift duo seems to have different agendas moving forward, with Elle looking to strike back and Joseph wanting to keep a low profile. But there also appears to be more issues back at the precinct after Officer Davis brings the case file involving “Black Lotus” to the attention of Police Chief Grant. And viewers see how the chief uses the power of police and other sources to cover up Elle’s existence and the crimes committed by him and his friends.

Elle wakes up from a vivid dream and seems more than ready to pursue those who participated in the “doll hunt,” especially after going through Joseph’s belongings and practices with his firearm. Joseph instantly expresses disapproval while giving viewers a look at his gun. This begs the question of the significance of the weapon and why it bothered him so much. We know little about Joseph, and I hope his mysterious past is explored, because I’m not so sure why he’d need a firearm in the first place. We know him as a tech whiz, so the fact he even has one is a bit puzzling. It leads to more questions about the character, especially since Joseph has been averse to helping Elle, telling her to walk away from this personal vendetta.

Elsewhere, Police Chief Grant is at Wallace Corporation informing Niander Wallace Sr. of Elle’s escape and not knowing the whereabouts of Hopper (the one Elle kills before leaving the desert). Grant made the mistake of not going back to the desert, which is the reason he assumes Elle is responsible for Bannister’s death. The current murder case has everyone involved on edge since Elle seems capable of retaliation, and any of the three (Grant, his wife, and Wallace) could be next. Grant assures Wallace of taking care of this defective replicant (Elle) to cover up the “doll hunt” they took part in earlier. I can only assume Elle’s controversial existence would be the downfall of these influential individuals, which has me wondering about the human rights element that seems to be cropping up from Blade Runner: Black Lotus. Replicants are made in a factory to emulate humans, thus creating the question of what rights they have, considering their origin. It could lead to an interesting story development because I’d love to know more!

And thankfully, at Joseph’s apartment, he breaks down the similarities and differences between a human and a replicant for Elle (and for those like myself) in a cute conversation about replicants needing nourishment. What I understood from his explanation is replicants were created to have the same necessities (food, water, and air) as humans, but without being self-aware that they were produced. I appreciate this clarification since I’m not familiar with Blade Runner and had no clue what made someone a replicant or what the definition of a replicant is. It created an excellent crash course for anyone that needed the extra information!

After agreeing (again) to help, Joseph identifies Grant and his wife from the data device Elle brought to him. I found myself engrossed watching Joseph work his magic with the technology, using only voice commands to get clear images of two of the hunters. Elle asks for printouts of her targets, but Joseph instead has Doc assist her after receiving a mysterious phone call. This makes me wonder what other things Joseph may be involved in and if Elle is a distraction to his “work.”

At the police station, Grant mobilizes officers and recruits the help of a Blade Runner, Marlowe (who we saw take down a replicant in the opening scene), to track down Elle. I’m hoping we will get more than the tease we got with Marlowe since he is the first Blade Runner we’ve seen (glad to see the legacy of this franchise continue)! And as Grant continues the manhunt, Officer Davis offers her insight, still believing that the perp they are looking for is a replicant (primarily because of the damage done to Bannister before his fall). Grant will not hear any of it and forces Davis to turn over any information she has. Grant’s sights are set on Doc Badger’s shop as a potential location for “Black Lotus,” after looking over a couple of people of interest. Grant sends what looks to be the entire force to raid the area but is greeted by Joseph instead. I found this to be a clever tactic, and it makes me wonder if the call Joseph received earlier was a tip about the raid! And considering Marlowe passed on this operation, could the two know each other?

Luckily for Doc, he wasn’t at his shop, printed the photos of Grant, his wife, and Wallace for Elle as she makes her way to the building Grant’s wife resides in the ending scene. Grant’s wife is going to need the extra police presence she was requesting at the end of the episode now that Elle is on her trail, which gave me goosebumps.

To sum up, I enjoy the hunter versus hunted dynamic being set up in this episode because both Elle and Grant are very dangerous to each other. And so we will hopefully begin to see the cat and mouse game that series like this often capitalize on very soon. I wouldn’t say Blade Runner: Black Lotus has been slow, but I think an uptick in suspense can help give fans a little more to discuss. And so far, the series has been an enjoyable watch (not too high or low), but one thing that bothered me in this episode was the term “skin job” being used. It came off as a derogatory term for replicants, showing how certain people in this fictional society view others who are different, and it felt a tad uncomfortable. And that’s due to where I come from, and hopefully, this feeling of uneasiness doesn’t fester. On a brighter note, we received a few treats this week in the English cast as Josh Duhamel is introduced as Marlowe. His raspy voice matched the dark and unemotional persona of the character, and I can easily see him becoming a fan favorite for Toonami fans! Brian Cox also made an appearance as Niander Wallace Sr., having an intimidating exchange with Grant, which was a delight to watch. I’m curious what Elle plans to do with Grant’s wife in the next episode, or could it be that she’s walking straight into a trap. We can only wait as this story of revenge continues!