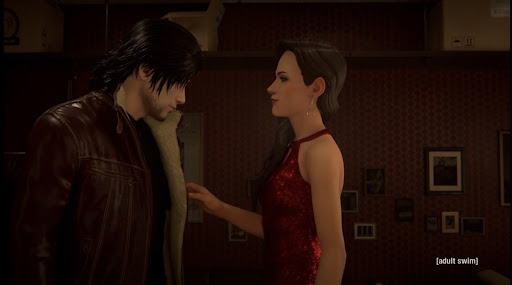 Heartstrings are pulled this week as Blade Runner: Black Lotus brings an emotional flashback episode exploring Joseph’s past. Disturbing images from the doll hunt leading up to killing Wallace Sr. begin to haunt Elle, leading to a revelation about Joseph’s history as a Blade Runner. Joseph has been a mystery since the beginning of the series, and fans finally get a closer look into his character. After opening up, Joseph agrees to help find Elle’s boyfriend, whose identity is finally revealed! This episode brings the emotions two-fold, and it is interesting to see how our main leads deal with trauma and loss.

Elle wakes up noticeably upset, reliving traumatic experiences in the episode’s opening scene as she grapples with unwelcoming memories despite getting rid of the people responsible for her pain. Assuring Elle that humans also have lasting memories, Joseph takes the audience back to his time as a Blade Runner. Fans are taken to a bar where we see a younger Joseph listening to a singer at a bar. Stepping away from the performance, he informs an officer of locating a replicant and that he is close to finishing the assigned task (saving the easiest hit for last). Joseph goes backstage to the singer’s dressing room but is surprised the singer has a read on what he does and why he’s talking to her (to kill her). Although instead of any bullets flying, the two have quite the discussion about the life expectancy of replicants and being able to convey emotions or feelings that replicants do not understand. The chemistry between Joseph and the singer made this scene entertaining because of her alluring personality that caught Joseph off guard, which is unusual to see. It would appear this replicant wasn’t the easy target he hoped for as an intrigued Joseph continued going to the bar every night to listen. That is until an unexpected guest awaited his arrival on what would be the last night for the budding romance.

The bartender motions to a booth where Marlowe is waiting for Joseph, which I assume isn’t good. Marlowe warns Joseph to finish the job, threatening to end it for him, which would probably get Joseph in a lot of trouble with the higher-ups. The singer walking over to visit Joseph seems to have a read on what is about to happen, and Marlowe informs her to make her last performance count (what a gentleman). Fans are treated to a single from the soundtrack, which was beautiful to listen to in this episode. Afterward, our performer makes her way toward an abandoned alley. After waiting, Joseph kills the singer while they embrace for the last time. I was touched by this scene because Joseph didn’t have a choice but to do his job, and I have a feeling he wanted to handle this himself rather than having his hand forced by Marlowe. Having to retire a replicant to whom he shared a bond may have been the reason he’s no longer as a Blade Runner. And considering how Joseph reacted to Elle using the gun that retired this replicant, the earlier scenes make a ton more sense. His hesitation and willingness to help Elle seem to come from playing a part in the unfortunate hand replicants are dealt and could be the redemption Joseph needs to clear his conscience.

The story of Joseph’s past inspires Elle to look for her boyfriend more than ever. Since Elle’s memories are the only thing she has to identify him, Joseph rushes to Doc Badger’s shop to get a machine to help identify who it is she is trying to find. After a whole night of Elle drawing the man’s face pixel by pixel, she finishes, and Joseph is stunned to see the person from her memories. To the shock of many, Wallace Jr. is the boyfriend in question! I say ‘to the shock of many’ since a lot of viewers on social media expressed their surprise, but this development should have been seen a mile away. There have been numerous clues, especially when her handprint is identical to Jr.s’. The real twist was Joseph calling Jr. (answering the question of who has been on the other line), believing his job was to help Elle (whatever that entails). But Jr. corrected him by saying Joseph was hired to work for him, giving a suspenseful end to this episode!

Overall, I appreciated this episode since we learned more about Joseph’s past. We got a closer look into his character, revealing he became compassionate to replicants after his perspective changed. Grammy Award winner Alessia Cara had the standout performance in this episode, from her vocal performances to voice acting, bringing the confidence that made the singer’s personality seductive to fans and Joseph! Next week’s episode should be interesting as the duo plans to find Jr. Since Joseph was open in this episode, I wonder if he’ll continue to be honest by telling Elle about his connection. The story is becoming more entertaining each week, and I can’t wait to see where the roads lead us!