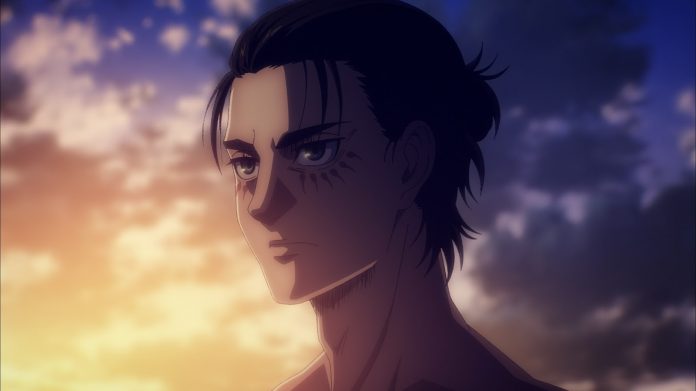 Fans will probably remember this week’s episode as one of the most iconic for Attack on Titan. With all the twists and turns, fans had to have been captivated. And we start right out of the gate as we return to seeing Armin try to communicate with Annie. Hitch makes a hilarious return this season by teasing Armin about his visit with Annie (Hitch watches over Annie’s crystal). This moment was fun and light-hearted, giving a sense of normalcy to these young soldiers. It was so cute to see Armin get easily embarrassed about visiting a girl from Hitch’s teasing. After visiting Annie, Hitch gives Armin a newspaper to read about the wrongful detainment of Eren because of the leaked information from Floch and others and how distrust toward the military has grown. It would appear that more and more citizens seem to side with Eren (or maybe Zeke’s plan on how to use Eren). Armin defends not providing information to the press because the military can not disclose Zeke’s scheme about the rumbling. Mikasa later catches up with Armin to meet with Premier Zachary. Interestingly, the camera focused on a few recruits leaving Premier Zachary’s office as our heroes travel there.

Elsewhere, Yelena (acting alone) confirms meeting with Eren 10 months ago to Commander Pyxis, thus providing a rather anticlimactic end to that subplot. Both Yelena and Eren felt the military would keep waiting to take action until it’s too late. She told Eren that those in power needed a wake-up call which was the catalyst to his attacking Marley alone and forcing the military to act. Yelena’s fascination with the Jaegar brothers seems to teeter in the area of worshipping them as deities (scary thought). Wanting to be noticed by Eren is a fanatic’s mindset to see depicted, and Yelena has gone to tremendous lengths to be seen, which is frightening. Anairis Quiñones (Yelena) has done an excellent job showing Yelena’s unstable side and providing some bone-chilling reads for her more serious dialogue. I cannot stress enough how well she’s done!

Returning to the militaries’ headquarters, Premier Zachary isn’t allowing Armin and Mikasa to meet with Eren after learning of the meeting between Yelena and Eren, which led to the attack on Marley. It’s believed Eren is being manipulated by Zeke but is Eren so far gone to allow himself to be Zeke’s pawn? When Mikasa looks at Premier Zachary’s custom chair (remember he used this chair to torture someone, in season three), wondering what will be done with Eren. After leaving the meeting, Armin tells Mikasa he believes the military is looking at candidates to inherit Eren’s titan, which might be the cause as to why Eren has seemingly been cut off from his friends. This course of action feels out of the ordinary, especially when dealing with who receives titan powers. Still, I’m certain Eren’s actions are causing these philosophical changes that have overtaken the island.

Before Mikasa can eavesdrop on the meeting, Premier Zachary’s office explodes(!), killing three soldiers and sending the Premier’s body flying outside. It’s a miracle Armin and Mikasa weren’t harmed but who is bold enough to kill the Premier? I don’t think many saw this coming and must be saddened that fans won’t get to hear John Swasey’s performance of Premier Zachary. I will undoubtedly miss him due to how unorthodox his methods were throughout this entire series.

Members of the military police met with Hange, Onyankopon (who was with Hange during the explosion), Armin, and Mikasa to discuss its cause. While determining the three recruits Armin and Mikasa saw at headquarters responsible for the domestic attack, a soldier interrupts, saying Eren escaped! Although this shouldn’t come as a surprise since he did tell Hange nothing could hold him in his cell. A group of Eren supporters, led by Floch, who also managed to get free, were waiting for Eren as he told them to find Zeke’s location. And Titan fans were finally able to experience the most anticipated scene of Eren putting on his jacket.  Some fans, however, were disappointed since it wasn’t the exact shot shown in the trailer or the manga panel back when it aired in Japan. Toonami fans didn’t seem to mind at the time, but I’m sure there were a few who noticed some of the differences and weren’t as pleased.

The military reconvened (this time, Commander Pyxis is in attendance) to discuss the unfortunate events involving Eren’s escape and Premier Zachary’s death. The people following Eren are now known as Jaegarists and are labeled as a dangerous extremist group who want to reform the military, with Eren leading the way. The Jaegerists are believed to be responsible for Premier Zachary’s death, which matched the timing of Eren’s escape, and they knew the military’s plan to transfer Eren’s titan.

Amid all the chaos of what transpired, Hange wants to figure out what Zeke plans to do next. Hange also noticed Yelena secured jobs in different places, including restaurants, which might give fans clues as to how she was able to meet up with Eren before anyone noticed. Despite only being seen this season, Yelena has created such an impact in the overall story that I’m speechless. It goes to the level of storytelling that Attack on Titan masters. And because of Hange’s unhinged demeanor, hearing Jessica Calvello’s range seems to have brought Hange even more to life. As Hange, Armin, Mikasa, Connie, Jean, and Onyankopon ride through town, we notice a disguised Pieck reading a newspaper, reminiscent of Jean reading a newspaper in Marley. Things are heating up once again as it looks like Marley has gone forward with their attack, not waiting for the global alliance. Now that we know what the Jaegarists are up to, we’ll see if the military can successfully keep the Jaegar brothers from meeting and possibly creating a catastrophe the likes of which the world hasn’t seen.