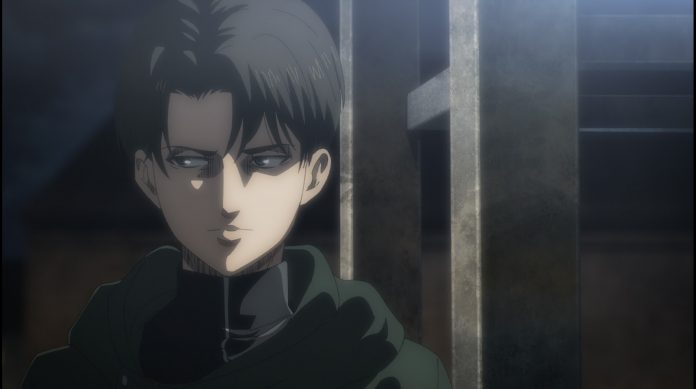 This week’s episode begins with a fantastic scene of the Scout Regiment swinging in harmony toward Porco (the Jaw Titan) as he realizes these soldiers do not fear him. Pieck, in her Cart Titan form, comes to the rescue as she uses machine gun gear against the Scouts, causing them to retreat, saving Porco’s life. Shortly after that, Zeke (the Beast Titan) enters the battle, which Levi smirks hearing the Beast Titan approaching. Levi orders the Scouts to stay alive while Zeke commands his titan comrades to kill the Scouts. Seeing Levi launch himself at Zeke reminds me of their unforgettable fight in season three, which ended with Zeke being saved by Pieck. Levi has a vendetta toward Zeke because he made a promise to Commander Erwin (before sacrificing himself and other Scouts) to defeat the Beast Titan, which has gone unfulfilled, so it would be delightful if we get the chance for a rematch.

Falco was inside the Armored Titan’s hands when he reached the surface after being buried by Eren’s destruction of the apartment building. Falco remembers Reiner transforming in the nick of time to protect him during Eren’s transformation. Falco rushes off to get help after reassuring Reiner of the people on his side, which you would expect from a person like Falco. He operates on the same moral compass as Armin, which is refreshing to see in someone taught to hate. As the commotion continued, Falco was able to find Commander Magath to inform him of Reiner’s condition, and Gabi arrived shortly after breathing heavily and armed with a gun. You can see the hate in Gabi’s eyes, and we’ve seen this before in Eren at the beginning of the series when the Colossal and Armored Titan attacked his home. Seeing this play out created such a wonderful element with how similar everyone is. Before, we watched as Eren developed such negative emotions toward titans, we now see this same perspective on the other side, with Gabi forming a deep-rooted hatred toward Paradis as Eren lays waste to her camp of operations.

Marley’s fleet approaches the port to help in the battle between Marley and the Scout Regiment. A small boat also arrives at the dock with a hooded individual onboard who’s revealed to be Armin! He transforms into the Colossal Titan, annihilating the entire fleet, adding more support for the Scout Regiment in a “big” way (pun intended). Armin’s debut was surprising to witness, especially with the damage he caused upon his arrival, making me wonder if Eren ordered the assault. The Colossal Titan’s presence infuriates Porco as he makes another attempt to retake the Founding Titan, abandoning the plan with Pieck to protect Zeke. As Pieck warns of an attack, Levi sends Zeke tumbling down by slicing his nape and finishes the job by detonating a grenade. Maybe this was overkill on Levi’s part, but you have to make sure your nemesis doesn’t get back up, right?

Under Commander Hange’s leadership, an airship approaches to retrieve the Scouts so they can move on to the next step to their plan. As a distracted Porco tries to take down the airship, Mikasa jumps into action by severing his legs, followed by Eren detaching Porco’s arms. Eren places Lara’s hardening shell in Porco’s mouth and uses the Jaw Titan to break it. Eren successfully crushes the hardening shell, killing Lara, and consumes the War Hammer Titan’s power. I couldn’t believe what I was watching due to the disturbing or graphic nature of the way Lara was murdered. I’m used to a person being eaten to gain a titan’s power, so seeing Eren gain a titan’s power this way was intense (and a bit of a letdown considering I thought Lara would pose more as a threat in the final season)! I was also surprised that Eren could even gain another titan ability since he is already in possession of the Founding Titan. Seeing that he can collect more (like the Infinity Stones), I wonder why other individuals haven’t thought of collecting every titan power to control the world.

After witnessing Eren’s victory, Gabi and Falco begin to scream for Reiner’s help. Even though Reiner wants to die in peace, the episode ends with him transforming into the Armored Titan before Eren could eat Porco. This is the first time we’ve seen this version of Reiner’s Armored Titan in the series, so I’m interested in seeing his fight against Eren. The English dub cast continues giving outstanding performances with returning actors Josh Grelle (Armin) and Jessica Calvello (Hange), and it’s lovely to hear their voices again. To me, the stand-out performance this episode was Kellen Goff as Porco; his chilling screams while being used for crushing Lara’s hardening shell made that scene more horrifying. We will see if the fight between Eren and Reiner will conclude the attack on Marley as Commander Hange’s attempt to rescue the Scout Regiment is underway.