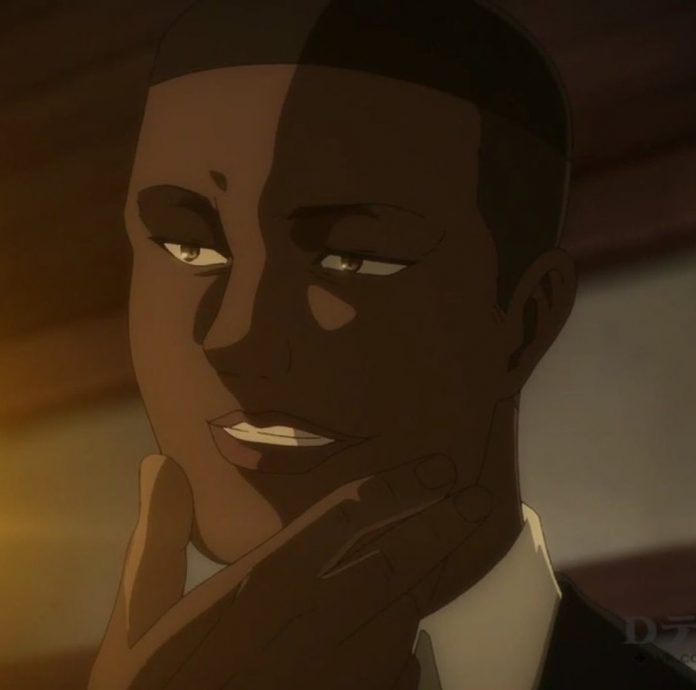 For this week’s episode, Armin reflects on events three years ago as Marley began sending survey ships to Paradis Island. In titan form, Eren carries one of the survey ships to the shore as Commander Hange welcomes the crew to the island and even offers tea for their troubles. I, like many fans, had to enjoy Hange’s enthusiastic approach to welcome enemies to the island (as well as Captain Levi’s signature glare). Hange and Levi show the opposition a soldier who was a part of the crew from a previous survey ship held hostage. At first, the group from Marley is ready to fight back, but a mutiny led by a female soldier, Yelena, shoots the captain of the ship before anyone could retaliate (and even accepts the invitation for tea). This conflict was a great start to the episode because it explains what progressed three years between seasons. And as a fan of lore, I always enjoy the type of storytelling Attack on Titan brings.

Hange, Levi, Yelena, and a Marleyan soldier (who we learn is named Onyankopon) meet in a tent discussing Marley’s army and navy. As Hange’s in amazement over a gun (I didn’t want her to shoot her eye out like Ralphie from A Christmas Story), the other soldier explains Marley is developing flying ships for aerial attacks. Hange was curious why Marley has not attacked the island again in the past year after developing new weapons. Yelena informed our heroes that there were two reasons why Paradis has been relatively safe from another attack by Marley. First, the pure titans roaming the island make landing difficult, and the elimination of pure titans on the island fascinates Yelena. Second, enemy nations came together to attack after learning Marley was no longer in possession of the Colossal and Female Titans.

As the meeting continues, Yelena proclaims the mutiny was commanded by Zeke and calls themselves the Anti-Marleyan Volunteers intending to free the Eldian people. Yelena wanted to strike back at Marley after they took her home and was forced to join the military. It’s a bit of a relief to know Paradis Island has allies across the sea and shocking at the same time to learn Zeke has been a part of this rebellion against Marley, especially with the damage he dealt the Scout Regiment. This development may seem a bit out of place considering what Zeke has done to hinder the advancement of Paradis, so I don’t fault you if you’re a bit confused. Thankfully, this will be explained in a later episode, so all I can say now is stay tuned!

Back on Paradis, the island’s military leaders are unsure what to do to move forward, learning everything from both the Scouts and Yelena. The officers quickly disagree with Zeke’s request to save the Eldian people due to his past actions. According to Hange’s report, Zeke’s plan to save Eldia calls for the Founding Titan and a titan of royal blood, revealing further details after those conditions are met. Eren remembers using the Founding Titan’s power when he touched a titan with royal blood (Zeke’s mother, Dina Fritz, the Smiling Titan). It’s moments like this that drive home how wonderful the Attack on Titan story can be. Being able to call back details that make sense from season one gave me such elation. Eren assesses that Zeke has an idea on how to awaken the titans in the walls to start the “rumbling.” Eren didn’t reveal this information to Historia because of concern for her safety and not wanting to see her be turned from an unverified theory. This interaction explains why Eren has not been able to control titans since the end of season two, and I’m interested in knowing the details of Zeke’s plan for this “rumbling” in the future.

And a moment that might have been lost by some, seeing the Anti-Marleyans Volunteers educating Paradis Island of the outside world from Sasha’s innocent questions involving seafood to then asking about Onyankopon’s darker skin. Sasha’s question shocked fans, but she nor the other Scouts have never been around a person of color. Onyankopon answers saying the Creator thought it would be interesting for different people to exist in this world, and finishes answering with the line, “We exist because we were wanted.” This was a profound statement because history has shown how “different” people are treated based on race, religion, sexual orientation, you name it. People who face discrimination have fought or currently fighting to be accepted or wanted despite slander and mistreatment, which Attack on Titan focuses on between Marley and Eldia. Even with the serious discussion it was such a joy to see Sasha’s discovering seafood and brought much-needed laughter after witnessing the previous episode.

Despite having the volunteers as allies and Armin wanting a chance to change the world’s misconception of Eldians, Eren feels the need to show the island’s strength. With Eren having his view three years ago, I wonder if this was the beginning of his moving forward mantra and acting independently.

In the present time, there is nothing but TENSION in the air. Eren, Zeke, and the Anti-Marleyan Volunteers are being held by the military to answer for the attack in Liberio. Eren is in a holding cell while Zeke is escorted to the forest with Levi as a chaperone (that is scary for anyone). The Anti-Marleyan Volunteers are surrounded at gunpoint by soldiers at Commander Pyxis’s command, which could turn somewhat dicey for Yelena and company. And to add more to everything that is going on, it’s revealed Armin is talking to Annie through her hardening shell. EXCUSE ME, BUT WHAT?! I wonder if Annie is listening to Armin as he seems to keep her informed on what’s happening in the world, or if she’s even alive still! I’m thrilled the English voice cast was able to bring this new episode to us despite having a week’s delay. Anairis Quiñones (Yelena) and Zeno Robinson (Onyankopon) shine in this episode as members of the Anti-Marleyan Volunteers, especially the fantastic answer Onyankopon gave Sasha about his darker skin, which as I stated earlier, resonated with me. Next week, we’ll see if Paradis Island’s military are closer to learning Zeke’s plan to save Eldia.