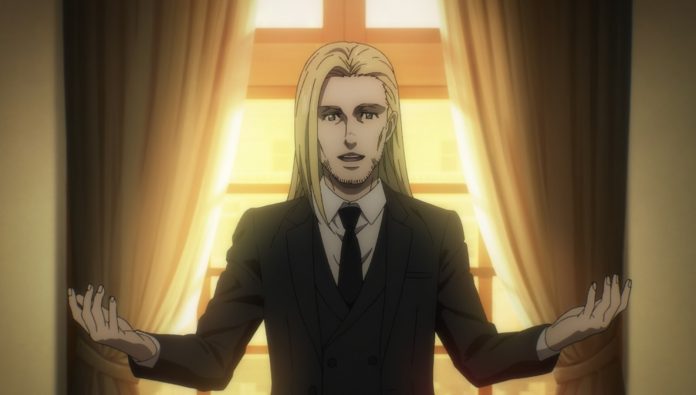 The developing friendship between Falco and the wounded soldier (who goes by the name Kruger) has now established trust as episode four begins! Kruger asks Falco to send a letter from outside of the internment zone, without anyone learning he’s not sick, letting his family know where he is and that he’s fine. For those wondering how Falco and Kruger’s trust seems to be so strong, recall near the end of the previous episode when Kruger reveals being in the hospital for emotional trauma. At the time, viewers found that Kruger wasn’t under any emotional turmoil and, truthfully, doesn’t want to go home to face his family. Falco becomes transparent after learning Kruger’s secrets by opening up about his feelings, not wanting him or the other promising candidate (Gabi) to inherit the Armored Titan. Falco is delighted to help Kruger by carrying his letter. Innocent enough, right?

The Tybur family (the influential family mentioned in episode two) make an unexpected visit to Liberio. Commander Magath is greeted by the head of the family, Willy Tybur, and the two have a private conversation. While outside, Willy acknowledges Magath’s experience as commander of the warrior unit and asks if he can recognize the War Hammer Titan among the family members. Magath isn’t able to identify the person and questions if the person is even present, but Willy assures him that the War Hammer Titan is still in their possession. Hearing the conversation play out gave me chills because I instantly wanted to know who it was because the family members ranged from elderly to rambunctious children. The series’ gift of delivering unpredictable plot twists is what makes the storytelling unprecedented, so the identity will be revealed when we least expect it, and I can’t wait!

As Willy admires the statue of the heroic Marleyan Helos (since the two were having this conversation outside on a balcony), he admits the Tybur family controls Marley behind the scenes, but the nation made their choice to be at war. Willy does take responsibility for Marley getting to the point of self-destruction. But he has a solution by revealing the “truth” to the world at the upcoming festival, which Zeke mentioned before in episode two.

Falco thanks Kruger for his words of moving forward, which pushed him to win a race against Gabi during training (she wasn’t happy about him trying to surpass her this late in the game). Kruger responds to Falco’s victory by needing to move forward himself and go home after the festival. It’s good to see this moving forward mantra being portrayed in a positive way since
Attack on Titan is not known for raising our serotonin levels. The two friends (Falco and Kruger) are then interrupted when a doctor approaches the bench to sit. He introduces himself as an internment zone physician by the name of Jaegar (hold on, could this be a relative of Eren?). Dr. Jaeger begins to tell Kruger that Falco’s uncle was a leader of a group of Eldians who wanted to restore the Eldian empire (by stealing the power of the Founding Titan). This separatist group are called the Eldian Restorationists and were punished by being “sent to paradise,” which we know as being turned into a titan on Paradis Island.

Dr. Jaegar shares this story so Kruger would stop getting Falco to do favors for him because he and his brother’s hard work would be for nothing if suspicions rise again regarding his family. He continues by telling Kruger to go home if he’s recovered and he’ll regret not being able to see them anymore, which Kruger asks if Dr. Jaegar has regrets about his own family. The question triggers a downward spiral of guilt as Dr. Jaeger begins to blame himself for his son taking his daughter outside of the internment zone wall and screams while remembering what happened to his daughter. And there’s the confirmation we’ve been looking for throughout this episode. Dr. Jaeger is the father of Grisha and the grandfather of Eren and Zeke!

After an upscale dinner party hosted by the Tybur family (which had world leaders in attendance), the day of the festival is finally here! We see the warrior candidates have the chance to enjoy the festivities and food, giving everyone an odd sense of peace. In the post-credit scene, Falco runs off but returns to ask Reiner to go somewhere and follows him to a basement to where someone is waiting. As Reiner enters, Kruger is sitting there, greets Reiner by name, and proclaims it’s been four years. Reiner stares in shock and calls him by his real name. Eren Jaegar!

What a cliffhanger! Eren has been hiding in plain sight, posing as a wounded soldier. This revelation brings up a multitude of questions, that I’m sure viewers were curious about as well. Has Eren been in Liberio for four years, and why is he there? Did the letters he had Falco sending to his “family” going to the Scout Regiment? Eren’s cold eyes stood out to me because it shows something has shifted in him, but I’m not quite sure what that is yet. I was stunned to know that Eren sat there unbothered while watching his grandfather have an emotional breakdown. Maybe his reaction was based on Grisha’s memories of how his grandfather handled the loss of his little sister. I’m both nervous and excited to see Reiner and Eren’s reunion, and this confrontation will be a preview of what’s to come, whether it be peaceful or hostile.