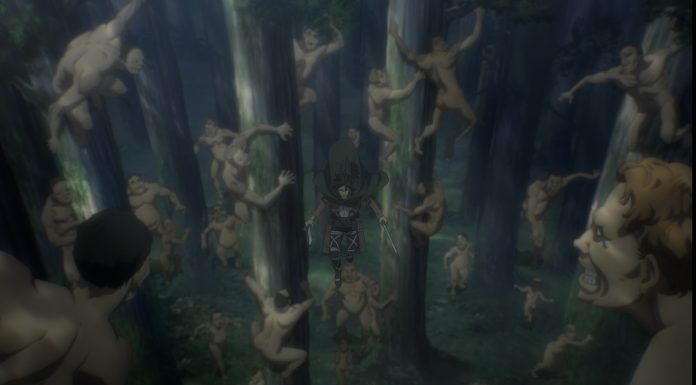 The long-awaited conversation between Eren, Mikasa, and Armin happens in this week’s episode. After Eren states that Hange and the others are fine and relocated, Armin asks all sorts of questions that the military (and viewers) want to know: What made Eren act alone when attacking Marley? Is he solely doing the bidding of both Zeke and Yelena? Eren answers he is free, and everything has been done of his own free will and begins to steer the conversation on how Mikasa and Armin are being manipulated instead. Both are shocked by Eren’s proclamation that Armin is being controlled by Bertholdt’s feelings and inform Mikasa her Ackerman instincts are controlling her.

As the conversation continues, Eren’s explanation turns more into insults when he calls Mikasa a slave for not being free to act and says he’s hated her ever since he was a kid. I was so astonished hearing Eren continues to bash Mikasa, bringing her to tears. It would appear that Eren’s transformation is complete, and it’s become something even worse than a titan. What’s worse, Mikasa having to listen to the man she’s loved since she was little throw these harsh words at her was truly heartbreaking to see unfold. And that’s when Armin comes to the rescue as he punches Eren in the face after one last insult. I was cheering for Armin so much to knock some sense into Eren, but the fight became rather one-sided and was brutal to watch as Eren manhandled his childhood friend. It was disturbing and makes this turn by Eren feel even more solidified. When the beatdown ends, the Jaegarists take Armin, Mikasa, and Gabi (who has been at the table the entire time) into custody and head to Shinganisha. Much like in previous seasons, the main English cast for Attack on Titan delivered on what had to have been an emotional scene to portray. Bryce Papenbrook (Eren), Josh Grelle (Armin), and Trina Nishimura (Mikasa) did an outstanding performance, and will probably be viewed as one of the best from the entire series. Grelle and Nishimura delivered the pain and disappointment both Armin and Mikasa felt as hurtful things were being spewed at them from a childhood friend. Papenbrook provided this cold-hearted version of Eren with expertise, and I enjoy seeing his performance adapting to the changes we see in Eren.

In the forest, Levi checks on Zeke as he reads a book, and the captain learns of Zeke’s eavesdropping on what’s happening at headquarters. What at first sounds like a deflection of the current situation, Zeke asks if the wine Levi’s group brought is gone. To which Levi confirms that every last member of his squad drank the brew. As Levi walks away and reflects on the promise he made to Commander Erwin to kill the Beast Titan, Zeke takes off running, and you guessed it, he screams. Levi looks up to see bright lights of soldiers turning into titans and rain down on the captain. Zeke continues his escape by being carried away in a titan’s hands and feels he can create a ton of distance due to his belief that Levi would have a difficult time hurting his former comrades. To Zeke’s surprise, Levi has caught up with him, slaughtering all of the titans in his path. Zeke transforms into the Beast Titan, giving fans a rematch between the two at last! This fight scene was on the graphic side with Zeke ripping titans into pieces to throw at Levi (since no rocks were lying around), but it was still an awesome sequence of Levi maneuvering to aim those thunder spears with precision. This fight wasn’t long enough for me, but it was satisfying for Levi to beat Zeke for the second time.

When Zeke wakes up, a thunder spear is in his stomach with the trigger wrapped around his neck. Levi angrily begins hacking Zeke into pieces so he won’t have the ability to transform into a titan, in what can only be described as a gruesome torture scene. Zeke asks for his glasses and begins to think about a man who played catch with him as a boy, explaining his talent for throwing objects. The episode oddly ends with this man asking if Zeke plans on playing baseball when he grows up as if the series is trying to make him more sympathetic. Zeke answers that he can’t because he has a very critical mission to accomplish. We will begin to learn more about the main antagonist in Zeke and figure out how he became as deranged as he has. I’m curious how the story will play out and how fans will feel about him once we get a complete picture of his character.