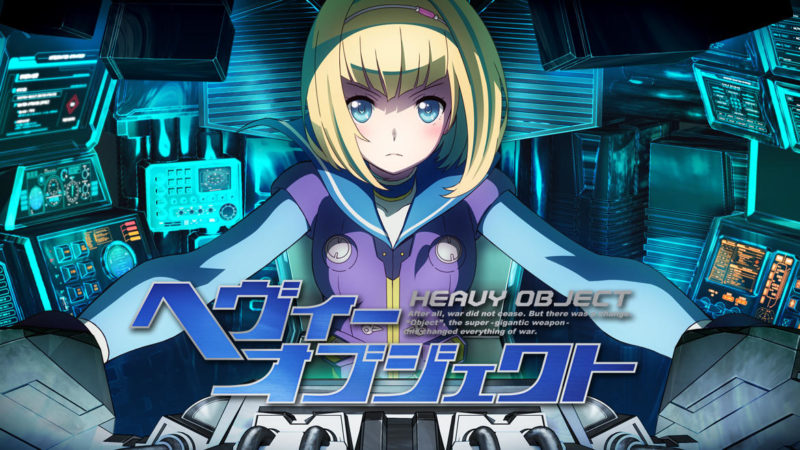 I have to give credit to Heavy Object for creating something I don’t think I’ve ever seen in an anime (or real life). Linguistic terrorism. Language became a huge motivation for an enemy to wage a Civil War. And as silly as that sounds, that particular battle/story arc was enthralling (good job Heavy Object). While I was mixed on Heavy Object from the first part of the season (episodes 1-12), I leave Heavy Object feeling moderately pleased. While there was a ton of unnecessary fanservice (to the point where it was ruining the overall enjoyment), moving past those awkward moments was worth the investment. I wouldn’t call Heavy Object a masterpiece, but it did a lot that I think fans would like.

The strength of this series is how the main characters, Qwenthur and Havia, come up with ridiculous plans to take down weapons of mass destruction called Objects. And after getting through a lot of the perversion at the start of this release, you get a lot of quick thinking by our heroes. I enjoy that aspect because even with Qwenthur and Havia sounding like perverts, they have a brain and can accomplish tough missions and salvage ones that are falling apart. In the last 12 episodes, we are treated to five separate missions that span two to three episodes. And while the Object battles and infantry battles were fun to see play out, I got a lot more from the lore of this series, which was what I wanted from the last release.

In the latter half of the season, I got what I wanted with a clearer picture of the geopolitical infrastructure, with four major powers leading the war on Objects (which include the Legitimate Kingdom, Intelligence Union, Faith Organization, and Mass Driver Foundation). We start to see what motivates each side (although many seem similar, with power and greed near the top) and how each country maneuvers in the ever-growing battleground. There seemed to be more information floating around that allows viewers to understand which power was doing what. A lot of random information gets dropped in Heavy Object, but there wasn’t much about the lore of the series. This half of the release resolves that.

Breaking down how things played out in Heavy Object is quite a task because during and after every significant battle a ton of information is dropped on viewers. Not to mention how every story arc could have easily had its own season. It wasn’t an issue for me, I found the information fascinating, but I can understand if it was a challenge to get the full picture. These story arcs include stopping an Object designer from fleeing to an enemy’s side, preventing the salvaging of Objects that were previously destroyed, striking a coal mine station, preventing a civil war, and dispatching a prisoner to the care of another foreign power. A lot of things to get into (that would make this article a lot longer than it needs to be), that I found to be fun.

These story arcs presented a lot more desperation from our main cast. While I believed that Qwenthur and Havia would figure out a way to stop the enemy Object, it seemed like the two were grasping for a miracle to happen. Enemies even began to use foot soldiers (copying what Qwenthur and Havia made popular), only making the battles more intense. But while I had favorite arcs in this release, the main story of Heavy Object became the best selling point of the series. Despite the issues with this series, learning more about the lore and seeing how each battle affected the world was fascinating. It became a huge reason to find Heavy Object more enjoyable. The story blew me away and had me wanting to see more.

While I enjoyed every arc in the second half of the season, the return to Alaska and the strike on the Faith Organization’s coal mine were my favorite arcs. Both had moments that left me speechless, such as watching Qwenthur outsmart Ohoho to eject from her Object and establish trust with the Intelligence Union waver. Not only was Qwenthur able to stop the salvaging of an Object, but he gained a fully functioning one for the Legitimate Kingdom to examine. Plus, it was nice seeing more of Ohoho, who I felt could have used more screen time devoted to her rivalry with Milinda. The two are both elite piolets and have a genius IQ. But the fact that Qwenthur was able to figure out a way to hijack her Object was nothing short of impressive. Even with the tables turning (between Qwenthur and Ohoho) back and forth, viewers were left curious as to who would come out on top. The Object battles (which are Heavy Object’s strengths) felt like a brilliant chess match between Qwenthur, Ohoho, as was the AI system Ohoho was using to help piolet her Object.

Not to be outdone, the Legitimate Kingdom’s offensive on the Faith Organization’s coal mine did a great job depicting how disgusting and horrible war is. But it also added some charming new characters to help out Qwenthur and Havia on their mission. Here we see a spy infiltrate the mission and become quite the obstacle to thwart our main heroes. It added a nice touch of realism, especially considering the spy (and enemy) helped kill some of the characters we were following. And the Legitmite Kingdom watched as innocent civilians were nearly wiped out by people on their side (which led to a civil war). This entire arc was compelling because even Qwenthur and Havia were questioning who was really in the right as they were attacking the coal mine (which was later found out to be a diamond mine).

The battles in every arc were a delightful spectacle, but they didn’t blow me away as much as I wanted. While the story became more compelling in this half, the action wasn’t as crisp as I’d like. We see one battle involving Havia using his rifle, but it didn’t become the action-packed adventure that we were treated to in the very first story arc. At first, while the story felt middling, it was the action from the Objects that I enjoyed watching. There’s an art to the way these weapons maneuver and fire on each other and it was interesting. But as the story continued, the strategy the enemy employed became the focal point, which made Heavy Object even more enjoyable.

What bothered me was how much fanservice was thrown in at the beginning of the second release. It seemed like every five seconds Frolaytia mentioned the incident where Qwenthur grabbed her chest. It does her character no favors and makes her look like a sex idol instead of the capable officer that she is. When she was playing pool and working out with Qwenthur and Havia, it was just an excuse for fans to ogle her, when she offers so much more to the series. In fact, she’s probably the second most important character in the entire show! So it was annoying that it became more of a joke talking about her bust size and watching her pose for the viewers

I didn’t like how Milinda wasn’t given much screen time in the latter half of the series. It just seemed like she wasn’t around. We do see her become jealous hearing about other women around Qwenthur (which was cute), but when she talks about him to Ohoho or asks Frolaytia about the fondling incident it seemed like a poor reason to give her a little extra screen time (making her look more lovesick than a capable piolet). Instead of having her involved for more legitimate reasons, it was all just a ploy to prove that she’s attracted to Qwenthur.

Also, hearing about Qwenthur and Havia discuss their fetishes and perversion didn’t sit well with me. I had a lot more respect for Qwenthur until heehawed disappointment when seeing Ohoho’s real body, instead of the hourglass figure that’s projected to those on the outside. Or when he and Havia were making a trade of contraband that shouldn’t be seen by any commanding officer. It made both characters seem creepy and diminished some of their more redeeming qualities.

The voice cast continued to perform well, as both Justin Briner and Micah Solusad had the buddy-cop angle down well. While the two had a lot of perverted lines to read, they both gave off an intelligent vibe, considering they had to think up plans to save their own skin while they were separated. Morgan Garrett, who is typically cast as a strong female character, didn’t let me down as Frolaytia . Not only did she do the character justice in moments where she had to be tough, but in her weaker and cute moments as well, which made Frolaytia a bit more diverse than some would give her credit for. I just wish that Alexis Tipton had more lines as Milinda. This character didn’t get enough screen time for my liking. In moments when she did show up, she sounded great in both her jealous and more emotional scenes. It’s a good thing that the main cast sounded great, as Milinda’s sparse appearances could have hindered the overall enjoyment of the series. As for those who later joined in voicing Heavy Object, Felecia Angelle stood out in her role as Charlotte Zoom. She had the most lines for any new/recurring character and was a vital one in the arc in which she debuted. But no one in the cast produced any disappointment.

The release comes in a standard FUNimation package with a cardboard slipcover. It didn’t include many extras, only an audio episode commentary, as well as a textless opening and closing. Considering this was another series that was a “Simuldub”, I’m surprised there weren’t more extras offered.

After watching Heavy Object, I think it’s better than I expected. While there are some issues that might put fans off, or just hit them with too much information, I found this series to be enjoyable. Plus, I think those who are a fan of military anime will see this series as one of the better ones out there. I didn’t think the second part of this release would grab my attention like it did, as the last half of the season was a lot more serious than the previous one. But as with many anime, of course, there was a bit of fanservice that felt out of place, even ridiculous. I think that if Heavy Object wanted to be a more ecchi series, then the fanservice would have been fine. But the fact that it had a lot of serious content could leave some feeling confused. Still, I think it’s a series that people should look into and see if it’s something they can get behind.

Cons: Early part of this release kept bringing up Qwenthur sexually assaulting Frolaytia; not enough screen time for Milinda; A lot of information drops throughout this release.

C.J Maffris is an editorial writer for Toonamifaithful.com and GeekEInc.com. Feel free to follow C.J on Twitter @SeaJayMaffris