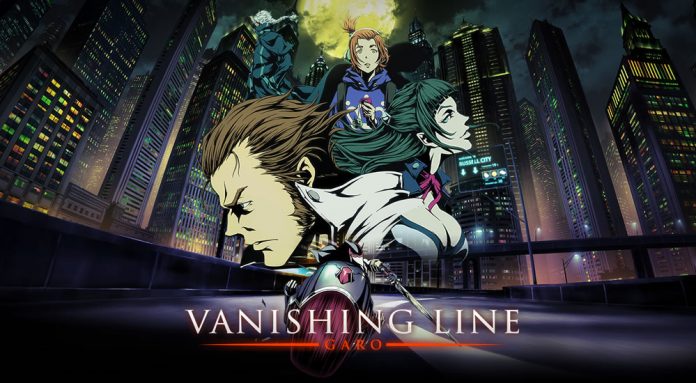 And so the story finally ends at El Dorado. Fans of GARO – VANISHING LINE – (Vanishing Line) will see how Sword, Sophie, Gina, and Luke vanquish the Horrors as well as find out all the little secrets El Dorado has hidden. I’ve been impressed with the storytelling Garo generally showcases and found myself compelled by what was going to happen. Vanishing Line has a lot of different things going for it from the previous GARO series. Adding these new elements to the usual GARO vibe made Vanishing Line a treat to watch. And while it wasn’t perfect, I can’t help but grin and hope for more seasons in the future.

Sword, Sophie, and Gina continue their journey to find El Dorado and Sophie’s long-lost brother. And while it takes a few episodes for the entire gang (including Luke) to reach this self-proclaimed paradise, fans get a few one-off episodes that allow both Luke and Gina to gain strength and prove their resolve. While some might argue that it slowed down the pace of the story (which it did), the action in these episodes was spectacular—especially seeing Gina fight more seriously and against more formidable foes. It blew me away, and I greatly enjoyed the little speed bumps on the trip to reach El Dorado (much like how vacation memories are made).

The group finally reaches El Dorado, where we learn it’s not the haven it’s made out to be. Horrors operate the city and trick unsuspecting humans into their “cafeterias,” where they can feed as much as they want. Despite the intentions (which we will get into), El Dorado is nothing more than a place for Horrors to feast, using the city as a farm, much like humans do with animals. Despite the grand scheme of its original idea, Martin Hennes (Sophie’s brother) envisioned a city that helps people live a life full of happiness and wonder. His vision was to create a place where you can be anyone you want, see anyone you want, and do whatever you want. Using computer programs he created (after all, he is a programming whiz), Martin helps establish El Dorado. With the help of a few companies (organized by Horrors), the city reaches its ultimate goal of feeding horrors at all times of the day. The central antagonist horrors protected Martin and use a ring made by their “king” to muddy Martin’s mind. And much to Sophie’s credit, she tries everything to convince Martin that what he was doing was wrong and that his programs are being used to murder thousands of people. Disguised as an Alpha and Beta test (looking at you, Sword Art Online), Martin’s achievements are nothing more than a mass-murdering spree, at the behest of the Horrors.

This revelation corrupts Martin’s heart and is taken over by the “king Horror,” leaving it up to Sword to slay it and save the lives of everyone who lives in El Dorado. Thanks to the spirit/program of his little sister Lizzie, Sword is able to make it just in time and finishes off with a heroic battle against the corrupt Silver Makai Knight (Luke’s father). After the fight, it would appear that Sword becomes stuck in some dimension that he was fighting in and forces Luke to erase Sophie’s memory (since she was losing it at the thought of Sword not being with her). Thankfully after a year, Sophie’s memories return, and she decides to become a Makai Alchemist and help keep the peace for humanity. And just when you thought it’d end on a powerful note like that, outcomes Sword (having some stomach issues), who seems almost embarrassed to see Sophie once again.

As stated earlier, I found the linear story of Vanishing Line to be impactful and fun. I enjoyed the simplicity of finding both El Dorado and Martin Hennes because it gives the audience a set goal in mind. Instead of trying to make the lore too complicated, Vanishing Line stays in the here and now, which I think can be lost on many fans. Sometimes it feels as if stories need complex lore and characters to keep the viewer’s attention. Considering how streaming services like Netflix and Amazon Prime Video have helped create a binge mentality, the short and sweet model made binging Vanishing Line a lot easier.

The action and the accompanying musical score enhanced the viewing in ways that I usually only see in mega-hits like My Hero Academia, Black Clover, and Haikyu!!. Watching Sword, Gina, and Luke take down some nasty horrors (as well as the main antagonists) were the best highlights of the series. The choreography and camera angles used during the more memorable battles (Sword vs. the Corrupted Silver Makai Knight, Luke vs. his father, Gina facing her trial) left me in awe. They made me want to see more action afterward. My fandom of anime began with memorable fights that captured my imagination, and Vanishing Line touched on that feeling frequently.

But I believe the allure this series had with its action was mostly strengthened thanks to the build-up of the side characters littered within Vanishing Line. Seeing both Gina and Luke play considerable roles in stopping El Dorado was fun. It was great seeing both Gina and Luke grow as people and become better in the process. Luke (while still a bit surly) was much more open to Sophie’s help and even completed a task on Sword’s behalf (erasing her memories). And Luke himself felt depressed having to do it. But, seeing other characters’ motives and feelings were also fascinating, especially when looking at the Horrors Queen and Bishop. All three of the main antagonists (including the corrupted Silver Makai Knight) were fantastic to watch and got me more excited with each episode. They weren’t merely creating El Dorado for food. While that did play a big part, each seemed to have aspirations once the city was completed, and that made them much more compelling to watch!

And what I appreciated the most in Vanishing Line was the handling of Martin Hennes. Here we have an unsuspecting genius, taken away by Horrors to create El Dorado, which turned into a city made explicitly for killing humans. Martin, realizing this, muddies his heart to a level appropriate for the Horror king and is finally devoured and dies. Seeing Martin lose his light from this realization and the thought of his sister hating him and eating at him was conveyed so beautifully. Just as Sophie said, his intentions might have been pure, but he created a weapon that was then used for nefarious means. He has to live with the knowledge that he helped facilitate the slaughter of innocent people. And that breakdown was spectacular to watch and an important lesson in real life.

The biggest issue that popped up was with Lizzie’s appearance. Having souls be a computer program was a significant reach, and keeping her around once Sword first escaped El Dorado gave a feeling of “plot armor” that wasn’t needed. Lizzie was this “get out of jail free” card to help Sword and the rest stop the Horrors. I think if Vanishing Line had Sophie figure out where the group needed to go to shut down El Dorado, it would’ve been much more substantial. You could still keep Lizzie around, but only when characters like Sword or Sophie were in her domain to help plant a virus and shut down the city. It felt like Lizzie was relied upon too much, which cheapened the accomplishment of stopping this plan. I might be biased because of how amazing her introduction to Sword was (when he believed she was an illusion or a threat, and she played along with it in a very coy manner). But I could’ve lived without her showing up so much in the second half of Vanishing Line, especially since the loss of her made Sword who he is.

And sadly, Sword’s quick defeat of the king left a bad taste in my mouth. While the corrupted Silver Makai Knight was a fair adversary to battle at the end, I wondered why this king was so feared, considering how easy it was for Sword to stop him. Sure, maybe Sword was played up to be the most incredible Golden Knight of all time, but I wouldn’t have minded a little more resistance from the “most important” villain.

The English cast provided an excellent performance, which might be the best any GARO series has seen. While no one blew me away to the point where I felt it was their most outstanding performance, everyone sounded strong and should hold their heads high when thinking about their work in Vanishing Line. Matt Shipman as Martin Hennes, was a great casting call; he was able to nail the emotional turmoil that enveloped him as he became a Horror. And Madeleine Morris shined as Sophie when she realized her brother was murdering innocent people, as well as remembering Sword after a year passed. I felt that both Monica Rial (Queen) and David Wald’s (Bishop) portrayal of villains for this GARO series was delightful, and a fantastic job of being intimidating without having to yell or use a louder pitch. Caitlin Glass did a wonderful job as the ADR Director, and even that sentence doesn’t do it justice for how well the English dub sounded.

Despite my praise, there wasn’t much added in terms of extras. Only a textless opening and closing video. A bit disappointing, but you can’t always get what you want.

I’ve been pleased that Toonami Faithful gave me the chance to review the GARO franchise, as it has become one of my favorite assignments. I enjoy the type of storytelling GARO gives its audience and felt that the added extras of a more futuristic time, an evil Makai knight, and an engaging main cast created all the elements needed to provide a wonderful experience. Nothing was compromised, which is a considerable feat in an anime. I hope that more GARO will be made in the future, and I can’t help but applaud how well everything came together. If you’re a Toonami fan and want more lesser-known properties to join the broadcast, GARO should be at the top of that list, and I can’t stress enough how much fans of the iconic block will enjoy it!

Pros: Fantastic fight choreography; amazing soundtrack; the simplistic story that made binging the series easier; a lot of side characters had a chance to shine; the English cast.

Cons: The over-dependence on Lizzie; felt Lizzie was a get out of jail free card; how easy to beat the king was.