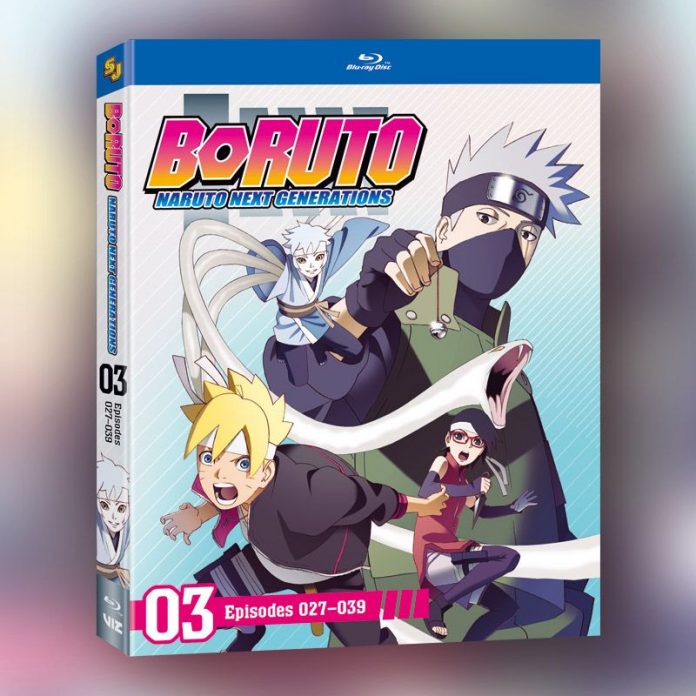 It finally happened. Since the beginning of the school trip arc, I’m getting more invested into Boruto: Naruto Next Generations (Boruto), and enjoying the story arcs as they go on. The new era the Leaf Village finds itself in is fascinating, and I like following Boruto as he grows. He’s done a lot in this volume to differentiate himself from his father, and I want to see more. I wouldn’t call Boruto the best anime out there, but it does a lot well, and I’m starting to see why this series hasn’t ended.

Set Three finishes the school trip arc, where Boruto and company do all they can to keep the peace between the Leaf and Mist village. Boruto, his classmates, with the added help from Kagura, rescue Denki. They defeat the thugs from the Mist village, who run away, creating a small moment of peace that Kagura enjoys. Inspired by Boruto not wanting to be labeled as the Hokage’s son, Kagura begins to forge his path and one that the Mizukage of the Mist (this is the Mist Villages’ Hokage) laid out for him. Kagura, despite his ancestry (more on this later), picks up fighting with swords again to become a great shinobi. However, viewers find out that the thugs who were sent to kidnap Denki are involved with a much bigger and scarier organization that wants to incite a war just like the old days. This group, led by a mist ninja named Shizuma, traveled to Kagura asking for his strength to help their mission, and surprisingly, Kagura agreed to join. Although he does this only so Boruto’s life would be spared in the upcoming revolt.

Boruto, wanting to save Kagura, enlists the help of his friends as well as the Mizukage to stop Shizuma. Shizuma and his allies raid the villages’ weapons vault, stealing the seven swords that were used by the Seven Ninja Swordsmen of the Mist. During this time, Mitsuki finds some information that the Land of Waves were the benefactors of this revolt, leading Kagura to join Boruto’s forces to stop the Mist Ninjas. Shizuma began merging with the Samehada (Kisame’s weapon) and kill everyone that stands in his way. Kagura and Boruto combine using the Hiramekarei (Kagura’s special weapon) and stop the revolt in its tracks.

Later in the release, the students at the Leaf Village Ninja Academy had to take the Genin exam and graduate from the academy. We begin to learn the goals of everyone in Boruto’s class and how they prepare to become a ninja. Sadly, they had to face off against Shino, Konohamaru, Anko, and Kakashi, who made his triumphant return as a proctor. Boruto and his classmates had difficulties passing the test, but ultimately everyone worked together and nearly captured the bell on Kakashi’s belt. Despite not getting it, everyone passed the exam, which allowed new ninja teams to be formed. Much to the dismay of Sarada and Boruto, they were now squadmates and will have to learn to work together to reach the goals they’ve set out for themselves.

This volume was my favorite to date since I began reviewing Boruto. I found the school trip arc compelling and the tie-ins from the previous Naruto series complement the current series beautifully. As stated in my review for the second set, I loved the animosity that was harbored by the Mist Village. So seeing how some of the most notorious Mist Ninja’s influenced Shizuma’s group was excellent, especially when we find out that Kagura is the grandson of Yagura Karatach (which was apparent due to how Kagura looked). Still, it would make sense that Shizuma wanted him to join his ranks to start a rebellion, and that Kagura did whatever he could to shake the fear people had around him. It was a wonderfully done story, and it was nice to have characters in Boruto be the focal point instead of bringing back the old Naruto characters.

I felt the same way about the graduation exams arc. Bringing back Kakashi as a proctor for this exam was a brilliant touch in that he could gauge more accurately how different Boruto is from his father. While many Naruto fans will reminisce about when Naruto, Sasuke, and Sakura took the Genin exam, I liked how this was done, similar yet not the same. It allowed Boruto and his classmates to grow and learn what it means to be a shinobi, which is different now since they are living in a peaceful era. And Seeing Kakashi up to his old tricks again is the kind of easter egg I want in this spin-off.

It finally seemed like viewers got to know Boruto better, and I found myself relating to him more than I was expecting. That unknown factor of what to do after you graduate hit me where I wasn’t expecting and I understand how some might drag their feet before making a life-altering decision. This was a powerful moment and one that many younger viewers can relate to seeing.

This batch of episodes finally had Boruto and his classmates as the focal point. I never once thought that this series was hanging on by the Naruto lifeline and this allowed it to shine in its own way. All of the tie-ins and easter eggs felt wonderfully placed and there was a delicate balance between new and old. I loved how we almost had a kiss between Boruto and Sarada, just like their fathers, and having them take the squad seven moniker was a nice touch as well. But I didn’t feel like the Naruto references were oversaturating in this set, and I couldn’t be happier. I can’t wait to see how the new squad seven deals with missions in the future.

The animation was solid, with a few episodes having an uptick in quality sprinkled through. I was much impressed watching Shikadai, Chōchō, and Inojin take on Anko during the Genin exam. Everyone looked stunning, taking on the proctor and other students besides Boruto were highlighted.  But at the end of the release I was blown away by the animation quality. Fans are treated to a flashback of Mitsuki’s who was on a mission with his father, Orochimaru. Mitsuki helps Orochimaru out and learns that his opponent is a clone just like him. Mitsuki, feeling confused by both his father and the clone, decides to walk his own path and does so by entering “Sage Mode,” all of which was animated beautifully. It was a great way to end this release (something that I’ve wanted for a while), giving it a beautiful bow to wrap things up.

There isn’t much in this release that I would complain about. I might be more of a shōnen fan/apologist for typical tropes in the genre. But here it would be more nitpicking than anything. I didn’t care so much for the eternal carp one-off or the other one-offs that didn’t propel the story. But the friendships formed from these episodes were invaluable and they help explain the bonds that other side characters have with one another.

The English cast continues to impress and love seeing how everyone continues to grow with the roles they have. As far as standout performances, I would have to give the nod to Xander Mobus and Carrie Keranen for their roles as Shizuma and Buntan in the New Seven Ninja Swordsman. The feral reaction of the Samehada infusing with Shizuma gave Mobus a chance to flex his acting muscles and found Keranen’s sympathetic villain voice to hit the mark. However, there wasn’t a weak performance and glad to see that Steve Blum can give Orochimaru the same “charm” that fans have come accustomed to hearing.

As for extras, VIZ Media toned it down a little compared to the second set. No stickers were included, and the only cast interview in this set was with Cherami Leigh. As well as the standard extras added, this one was pretty barebones compared to others.

I still can’t believe I’ve become more invested in Boruto. Naruto wasn’t something that I was glued to watching (compared to other anime back in the day), so this development was a huge surprise. But I’ve been impressed with the direction the series has gone and found the latest stories fun to watch. Plus, the excellent balance between original stuff and easter eggs from previous Naruto series made digesting this set a lot easier. It’s what I wanted, and I think others on the fence about this series might enjoy it as well. So I’m hopeful that Boruto will continue the trend it’s on, and that we will see more of the new squad seven in action.