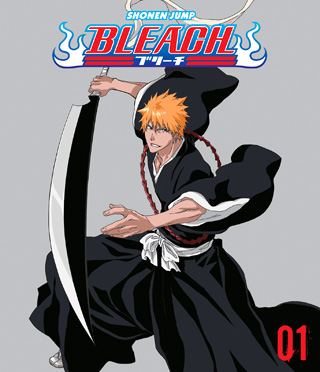 Before I get into this review, I just wanted to say a couple words about the series itself.

With Tite Kubo’s Bleach manga finally ending after 74 volumes, it is a hard pill to swallow for some fans because the final arc of the manga did not get touched on in the anime. We all know that Kubo had his issues with Shonen Jump and considering the hellish hours that it takes to get a weekly manga done, it was only a matter of time that a veteran and genius like Kubo would eventually hit his breaking point and the quality of his work would decline. Being a big Bleach fan I just take it for what it’s worth because I admire Kubo sensei for bringing Bleach into my life and since I love chanbara or samurai anime and manga, Bleach was destined to be on the all-time favorite series list for myself personally.

Now let’s get into the real reason for this article and that is the release of Bleach Uncut Blu-ray Set 1. First, here’s a brief synopsis of Bleach Uncut Set 1 episodes 1-27:

For as long as he can remember, Ichigo Kurosaki has been able to see ghosts. But when he meets Rukia, a Soul Reaper who battles evil spirits known as Hollows, his life is changed forever. Now, with a newfound wealth of spiritual energy, Ichigo discovers his true calling — to protect the world of the living and the dead as a Substitute Soul Reaper. When Rukia is taken away to face the ruthless justice of the Soul Society, Ichigo and his friends must cross over and do battle in the spirit world…

Before the boom of hi-definition technology coming to the forefront, all we had was your basic standard definition television which at the time worked for everyone. But as innovations were made to improve picture quality, it’s apparent that Blu-rays were far more superior to standard DVDs. This is what makes this first Bleach Blu-ray so special. The hi-definition quality gives loyal Bleach fans and first time viewers a chance to experience it in a level of quality that I can only describe as having a moment of pure rapture in the presence of anime Jesus! Considering the first 27 episodes were some of the better ones, you will be happy to know that it is shown in the original 4:3 aspect ratio and not 16:9 which as we know was a complete train wreck with DBZ (no disrespect to that fandom, but that was an injustice and sin that even Wabisuke would not forgive).

These are masterfully done and capture the art style of Bleach in the early days when Kubo was producing aesthetically pleasing art with Bleach which was his signature and made him, in my opinion, an anime and manga god. This caused Bleach to be considered one of the Big 3 animes because it performed so well and gained popularity. Though some may consider the Blu-Ray to be on the pricey side, it is well worth the money and you will not be disappointed. Take, for example, the animation which is just beautiful. I also have to mention that sound quality is excellent to the point that I had to turn my TV down some.

Overall, Viz Media did a great job releasing this on Blu-ray. If you are a fan of Bleach or a first time viewer, I highly recommend you pick up this set. That’s why I give this Blu-ray release a 10 out of 10.