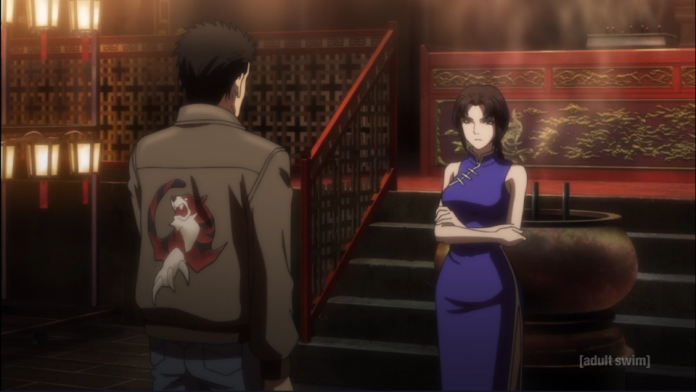 This week, the Wude story comes to a close, but not before following familiar plot beats making this episode more mixed than I care to admit. I am glad there’s no fifth Wude to learn, given how easily predictable the story’s gotten in this section. Sadly the Wude is not the only redundant aspect to the episode, as we will see Ryo repeat using the Chawan Sign with cups several times over to find Yuanda Zhu. The Wude story arc has been a colossal letdown so far, culminating in this (what I hope to be) final episode. And while I may be down on the overall enjoyment, it’s not all bad as fans are treated to a fantastic action scene and further developments on side characters to keep this episode from dragging!

Ryo finally gets a lead as he discovers a book with Yuanda Zhu’s name on it, thanks to Fangmei. Looking through, he spotted the name Sunming Zhao, which is the person Lan-Di accused his father of killing. As Ryo ponders, a slip of paper falls out from the book, and on closer inspection, it shows a zigzag pattern of circles. Unsure what this meant, Ryo asks Fangmei about it, but she isn’t familiar either. Bummed by the answer, Fangmei suggests he ask the owner of the tea market, who promptly directs him to Guixang, creating another search mission that slows down the series’ momentum.

Guixiang lets Ryo know that the circles are a Chawan Sign that denotes various meanings, and this particular one is a sign that someone is a friend of Yuanda Zhu. She suggests Ryo eat at restaurants and create the same pattern with cups there to attract the attention of someone who might be connected to Yuanda Zhu. Ryo attempts this and eventually is given a note to meet at Man Mo Park at 9 p.m. Viewers may expect the story to progress on this note. However, Ryo takes a metal pipe to the head upon his arrival, knocking him out. While I’d like to see Ryo make some headway, it was nice that Xiuying rescued him after this incident. The relationship between Ryo and Fangmei continues to blossom as she tells Ryo about Xiuying’s brother Ziming (who viewers may remember appearing in flashbacks). Ximing and Xiuying grew up together in an orphanage, but he disappeared some years ago. Seeing similarities between him and Ryo seems to be motivating Xiuying’s support of and concerns for our hero. Ryo continues trying to get the attention of the devotees of Yuanda Zhu. The repetitive nature of the Wude moral lessons was frustrating enough, but seeing Ryo making the Chawan Sign with cups with little success adds to the story dragging. It has created a formulaic problem that has reached a boiling point.

It’s been four episodes of a familiar pattern that has tested my patience. Ryo looks for a martial artist to learn a Wude from where he has to prove himself after failing the test at his first go at it. It was so predictable that I wouldn’t blame if anyone thought the same episode was playing a repeat. I didn’t mind so much the first time, it took Ryo down a peg and forced him to rethink his strategy, which is compelling. But the same thing again and again? That doesn’t equal entertainment. Breaking this up might’ve helped some, or maybe condensing the Wude to two lessons per episode. Or even have more side stories that involve Joy, Ren, Wong, etc. Or something different to help change the formula that Shenmue the Animation developed.

It was entirely too predictable, as we are witnessing nearly the same thing just with a different Wude. Even down to the flashbacks to Iwao Hazuki reminding Ryo that “It is still not enough” among others. It’s not that callbacks are inherently wrong (look at One Piece), but I’m at a loss with how exact this formula has been. It has annoyed me and hindered my overall enjoyment. And I’m Shenmue diehard; I can only imagine how others not as invested have been feeling. We need something to help spice up the series that has been stagnating in this recent stretch. It isn’t crazy to suggest that Shenmue the Animation could have used other plot points to help diversify aspects of this current arc, but that wasn’t what happened.

Sadly it still takes a while for the story to get going. Still, Ryo manages to attract the attention of a former martial artist, noticing how Ryo incorrectly displayed the pattern, warning him that setting them up wrong is dangerous. This new acquaintance also says he’s seen the sign of Yuanda Zhu at the Dou Jiang Diner. When Ryo asks him about the Wuda, he takes him to his barbershop. Ryo is tested with a razor blade quickly coming to his neck. Ryo dodges it and is summarily told he’s not suitable for the Wude, which is interesting since Ryo has shown significant progress in the Wude.

Things finally progress after Ryo makes a lead with the Chawan Sign at the Dou Jiang Diner, which nets him a meeting with an aid of Yuanda Zhu. Unfortunately, this meeting doesn’t last long before some punks attack them. Now there’s a plot beat repeat I don’t mind observing. While seeing Ryo duke it out has been happening every episode, it’s always fun to watch him catch some hands. The aid tells Ryo to run, but unsurprisingly, he stays and beats down the thugs in front of him. The leader tries to rally the rest of his crew, but Xiuying secretly knocks them out from a back alley, giving some semblance of teamwork between our central figures. Afterward, Ryo speaks with the aid of Yuanda Zhu, who is shocked that the Chi You Men (Lan-Di’s men) were able to extend their reach to Japan. It seems Yuanda Zhu is in hiding, but the aid does know one person who may be able to help Ryo find him, Ren. The same Ren who’s been asking Joy about Ryo and is in charge of the gang Wong joined. Convenient as that connection may seem, Ryo still manages to run afoul of Ren’s men, only being saved by Wong.

Finally, the fateful meeting between Ren and Ryo can take place thanks to Wong’s help. Ren is shown to be quite the character, setting Ryo up to take the fall for his theft from the same punks that attacked Yuanda Zhu’s aid, which we now know are Yellow Heads. Everything is coming together as Ryo trounces the Yellow Heads again (will they ever learn?). But fear not, as Shenmue the Animation treats us to another funny chase between Ryo and Ren, adding a bit of levity that I’ll never be against experiencing. Upon catching him, Ryo tells Ren why he’s after Yuanda Zhu, convincing Ren to agree to help since he believes it will be profitable. Ren’s fascinating to see, while it seems like he’s greedy at first glance, I don’t buy his story of there being money in this for him. But it brings a new dynamic to Ryo that I don’t think he’s used to, which should be fun down the road (so I hope). There must be more under his cool facade, and I can’t wait to learn more about him.

Thankfully we reached the end of the Wude story, with Ryo retaking the barber’s test. This time he doesn’t flinch from the repeated attack mastering the Wude of Dan – “Be brave and stay calm to make the right decision.” Ryo finds out that the barbershop owner was severely injured due to his misjudgment, proving threat assessment is critical for a martial artist. With the final Wude acquired, Ryo recites it to Xiuying and goes on about the loss of her brother (hitting a nerve for sure). Having it click into place, Ryo realizes why Xiuying has been averse to helping him since she believes he is walking a path of murder and destruction. She wants no part in helping someone become strong to kill. Ryo insists he’s not after revenge anymore and wishes to understand why his father was killed. Xiuying, not believing him, grills Ryo on this point, insisting that she still sees a desire for revenge. Unable to reconcile, Ryo says he will leave the Man Mo Temple, no longer wanting to burden Xiuying, ending on a somber yet powerful note.

The conflict between Ryo and Xiuying has been the silver lining I’ve spoken of earlier as we see two equally stubborn and well-meaning characters reach a breaking point. Xiuying has seen revenge ruin lives (my guess is with her brother) and wants to save Ryo from a similar fate. Meanwhile, Ryo sees her as holding him back, and like the viewers, wants to move forward. Ryo must be just as tired of having his journey stymied by random martial artists playing coy with him. The two characters are similar and do help each other, with Xiuying being a huge highlight since her introduction. I want more, especially together because they compliment each other so well. Plus, the voice acting was on point during the final moments, adding that cherry on top of satisfaction. Between Austin Tindle and Christine Auten delivering a strong rendition of resolve and regret that was palpable.

Overall, I’m left in a weird spot after this latest episode of Shenmue the Animation. The final moments had the tension that keeps viewers invested. And I enjoyed a new dynamic added with Ren considering he’s not someone Ryo has been around before. But looking back at the repetitiveness of the past few episodes has made this series feel stagnant. And maybe that has something to do with not playing Shenmue II myself. But I wonder if there could have been a more active way for Ryo to learn all four Wude without it being the same thing repeatedly. It doesn’t feel right seeing Ryo struggle as much as he has compared to what has been established back in Japan. But I digress. Still, as much as I have criticized this recent story arc, the ending was enough to keep my hopes up that the story will begin to be more entertaining. It felt natural to have the two sides separate, considering how similar they are. I’m all for this kind of conflict as it gives the impression that Ryo and Xiuying are siblings who are having a falling out (playing on Xiuying’s emotions toward her family). It hits the right note, and I sincerely hope that will continue in the next and last few episodes.