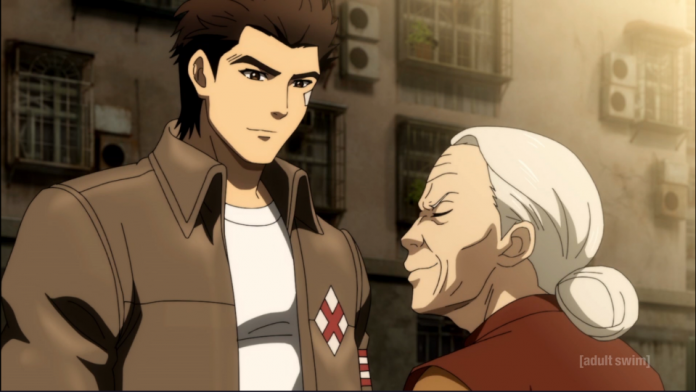 New and old lessons combine as Ryo goes through more personal growth in the eighth episode of Shenmue: The Animation. We’ve watched as Ryo has been forced to deal with his flaws for the last few weeks, and it’s gratifying to see him improve. This week is no different, but we have some other areas of focus, despite Ryo still searching for a new Wude (which is predictable). This episode borders on being pedantic, given the repetition of themes and even a lesson Ryo frustratingly has to re-learn. Thankfully, other characters can give us new things to watch. And while the episode felt like a downer, the final minutes had my interest about what’s to come next!

The episode opens with the energetic and adorable Fangmei helping Ryo do housework as a form of paying rent. Specifically, he helps bring old books outside to air them out. Ryo doesn’t see much value in this line of work and wants to jump ahead on his search for Yuanda Zhu. Noticing his frustrations, the head monk tells Ryo to focus harder, as the books in question may be able to assist him on his journey. Not picking up on what he was being told, Ryo heads out to look for martial artists. In his haste, he runs into the landlady that chewed him out at the Yan Tin Apartments, Guixiang Lee, forcing her to drop a bag. Freaking out that her goods might have been damaged, Ryo is roped into assisting with her delivery. With his trials in finding the Wude of Gon, you’d think he’d slow down and be more mindful of his surroundings, but it seems Ryo still hasn’t mastered being patient. As it turns out, the goods Ryo helped deliver was a tea set that wasn’t destroyed (phew). Ryo then hears a rather thought-provoking sentiment about the value or inherent value of the tea set. It isn’t worth much monetarily, but that isn’t what matters most in life. Anything can be a treasured belonging worth the world, and finding sentimental value in our things can help build long and lasting relationships, be it a card, video game, etc. And there’s a bit of romanticism looking through old nicknacks that might matter to me as this tea set did for Guixiang. It forces Ryo to rethink how he’s been viewing Hong Kong and how he may have had his issue; maybe there’s some beauty that he’s been missing.

Elsewhere, Joy runs into Wong, trying to pickpocket her (unsuccessfully), and agrees to help her find where Ryo is for a price (Joy’s banter has been such a pleasure in this series). She was concerned with Ryo leaving the apartments she’d set him up in while he was looking for a place to stay. The search doesn’t take long as Wong and Joy run into Ryo as he continues his search for martial artists. The group finds several and begin at Pigeon Park, where the woman in question wants to spar with Ryo. Both were impressed with each other’s skills, but unfortunately, she doesn’t know about the Wude. However, she suggests another place to see if anyone can help. Meanwhile, Xiuying (Lishao Tao) comes across a group of punks picking on a child, stepping in to rescue them. Fangmei escorts the children to safety, though Xiuying’s aura was enough to scare them away. While we’ve seen bits and pieces of Xiuying’s noble heart as she assists Ryo, it’s nice to see someone different in Hong Kong stand up for the weak. While Ryo did the same early in his journey, he was being conned, showing viewers why most in this town are hesitant to help. Given the inherent risks of combat, seeing Xiuying fight back reflects strongly on her character.

Frustrated at his helplessness, the boy who was saved expresses a desire to get stronger to make the punks pay for terrorizing his sister, making Xiuying nervous. Upon hearing this declaration, she remembers a scene (viewers may recall seeing her memories briefly in prior episodes) before encouraging the child that vengeance can lead to ruin. This is excellent foreshadowing for the episode’s ending (which will be discussed later), and a fascinating contrast to Ryo. Ryo’s primary motivation for his quest is the very thing Xiuying is against, which makes me wonder if their ideology will come to a head more dramatically soon. This potential conflict gives viewers a bigger picture of why she refused to provide Ryo with what he wanted while not turning him away. Perhaps she feels the lesson in Wude can help steer Ryo’s heart to a more tranquil understanding of solving internal strife (or external since he wants to fight Lan-Di). It’s a necessary step in progressing for what has been a revenge story to turn into something more significant. It’s always fun to see a villain get what’s coming to them, but having a hero veer off the right and true can feel demoralizing. We don’t always need perfect cookie-cutter heroes, but I would like to still root for the character we are supposed to in this context. Later, when arriving late at the Man Mo temple, a heated argument between Ryo and Fangmei ensues that has her take off in frustration. While this is going on, Joy and Wong hear that a martial artist is keeping land sharks at bay at the Yan Tin Apartments and rush to tell Ryo.

Still, in his search of finding martial artists, Ryo rushes to the Yan Tin Apartments, where land sharks are assaulting Guixiang Lee. Ryo does not hesitate and immediately steps in to block their attacks, saving her. The thugs try to justify their actions to make the town prettier, and why they are trying to shake her down. Ryo tells them off for only seeing things at surface level and admits he had done the same recently, showing the growth many have been waiting to see. After handling business in a breathtaking action scene, Ryo is asked why he came to the apartments, where Ryo admits he came to find a martial artist in hopes of learning about another Wude. Knowing that Ryo acted not to become stronger but to do the right thing, Guixiang reveals that what Ryo did was part of the Wude, Yi. Shocked that Guixiang is the martial artist he was looking for, Ryo is again chastised that he needs to stop judging people by their looks (will here ever learn!). Ryo recites Yi to Xiuying, asking if this was what she felt he was lacking, but that wasn’t the case. Xiuying read him like a book knowing he was out for retribution, moving in the opposite direction of what she wanted. Xiuying admonishes him about killing for revenge, comparing it to murder. She wants no part of that. Ryo ponders his next move before meeting with Fangmei, where the two make up, and Fangmei shows him a book with Yuanda Zhu’s name on it!

The highlight of this episode was the reminder to the audience, and Ryo that while avenging loved ones may be understandable, ultimately, killing is terrible regardless of motive. We now know Xiuying’s concern, which must be turning some gears in Ryo’s head. While I mostly enjoyed another Adult Swim and Crunchyroll original, Blade Runner: Black Lotus, I was saddened it didn’t let Elle grow to realize this. Seeing Ryo being confronted with the costs of seeking vengeance makes me more excited to see where this is going.

If this episode only contained another repetition of Ryo learning life lessons from the Wude formula, I’d be dreading next week. This episode has become my favorite since Shenmue: The Animation entered Shenmue II territory by adding the question of morality of revenge. It’s an interesting topic that surprisingly isn’t touched on a lot considering how black and white hero stories tend to be. And instead of taking it to the extreme and making Ryo more distraught, this conflict of morality of his actions feels much more personal and understanding (instead of him needing to be lectured on his motives). I’d also like to applaud that while Ryo ended up in another side quest death spiral this week, his wandering led him to new places and people, rather than returning to the same area and people, as was the case last time. This episode was a remarkable improvement and left me wanting more. Next Saturday cannot come soon enough!