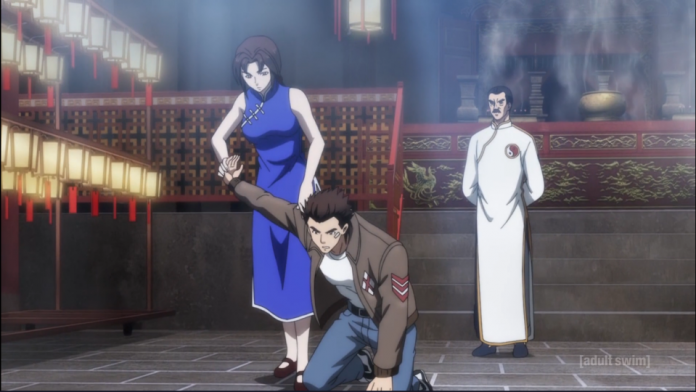 Ryo gets a second helping of growth in the latest episode of Shenmue: The Animation, continuing to receive plenty of setbacks on his road to Yuanda Zhu, making this trip to Hong Kong quite the ordeal. Before, Ryo always seemed to have an answer for any obstacle his way, and while he suffered setbacks, serendipity often gave him the answers he needed. Now, Ryo’s had nothing but bad luck (self-imposed, mind you) and a humbling experience on his quest for the Wude. Ryo getting hard-knock lessons continues to be a theme; however, not all is lost for our hero as we get to see how Shenmue the Animation offers character growth in what I hope to be a more engaging way than most.

Ryo is in disbelief that the woman in front of him was Lishao Tao. To prove it to him, the two spar. Being the “gentleman” he is, Ryo was incensed to battle a woman since he didn’t want to hurt her. Inherent sexism aside, it was a rather bold proclamation from our hero for him to assume that he would hurt her, considering Lishao Tao is the master. To Ryo’s dismay (and what I’d call good karma), he is easily handled by Lishao Tao, who demands he return home. Of course, Ryo isn’t going to do that, and on his way out, he is informed by the monk who greeted him to try the Guang school of martial arts to learn more of the Wude in an attempt to change Lishao Tao’s mind. Curious why the monk is helping, viewers might wonder if there’s more emotional turmoil within this temple. Perhaps this is the push Ryo and Lishao Tao need to improve themselves.

Sadly, Ryo is turned away at the Guang school by their teacher Zhoushan Xuan when asked about the Wude since it ruined someone’s life before. Suggesting that either a student died while practicing or became more aggressive after mastering it. Puzzled by the story and being rejected, Ryo leaves, only to run into Joy for some more playful banter. Which, I’d argue, has become some of the highlights for the series. Joy eventually helps him meet a street performer who sent some thugs packing in a recent scuffle. In need of any lead about the Wude, Ryo finds said street performer, Zongquan, who initially uses him for a street performance (at least Ryo made some money for his troubles). But when Ryo informed our street performer he was looking into the Wude, Zongquan brushed him aside. In doing so, Ryo noticed a “Freudian slip” where Zhongquan mentioned ‘the honorable Zhoushan Xuan.’ It led Ryo to connect that Zhongquan might have been the individual he learned about earlier. But he isn’t dead. Sure, he’s a bit unkempt, but things seem fine overall. Regardless, Ryo heads to the Guang school to get more answers.

Seeing the series return to its investigative roots is very refreshing. Just like those who played the games, it shows the audience the growth of Ryo. And while you have more control if you’re playing the game, seeing how Shenmue the Animation adapts that aspect has been a tremendous strength. In being more cautious in taking his time with the people he’s seeking input from, Ryo shows that he’s taking into account what he’s learned since arriving in Hong Kong. And being able to watch steady improvement instead of rushing to advance the plot keeps the spirit of Shenmue alive in this new anime.

With the realization that Zonquan is connected to Zhoushan, Ryo returns to the venerable master for more information. In this conversation, he is told that Zonquan is the ruined life Zhoushan spoke of earlier and blamed himself for his student falling off the path by using his martial arts as a spectacle. And while Ryo gets a history lesson from Zhoushan, Joy meets up with a man named Ren, who viewers saw as the leader of the gang that robbed Ryo when he arrived in Hong Kong. He has gained interest in Ryo, wondering about any secrets Joy could tell him. Not thinking much of the conversation, Joy informs Ren of Ryo’s location at the shopping mall with Zongquan. What follows is a comical, almost “Benny Hill” chase-like moment, where Ren keeps narrowly missing Ryo as he struggles with a separate band of thugs at the mall. Once again, Ryo is dragged into another battle, as a rival gang called the Yellow Heads cause a ruckus as they search for Zongquan. Ryo handles his business like a professional but is grabbed by Zongquan mid-fight, who forces him to flee with him due to him not wanting to deal with a hassle.

Hassle being the operative word, considering that’s all Ryo has faced since leaving his hometown. And while I don’t have an issue with Ryo stumbling before reaching his peak, the tedious nature of all the problems Ryo succumbed to has led to Shenmue the Animation having peaks and valleys these past few episodes. There have been some awesome fights to help give some excitement, but that “isn’t enough.” I can only imagine how long it felt dealing with being a messenger pigeon for Zongquan and Zhoushan were and going back and forth from Lishao Tao’s temple. There are some gratifying moments, I’m sure, but there comes a point where when playing a game, you want to progress quickly to find out more within the story. The anime probably doesn’t feel as long; the pacing can feel tiring.

Seeing Zongquan’s reluctance to fight leaves Ryo curious until he meets up with Joy for dinner, who offers him advice about sticking out too much. Ryo cannot help himself as he is warned about grabbing attention from the wrong crowd. To which, Ryo makes a connection with Zongquan’s desire to not fight for the sake of it. Ryo realizes that Zongquan still had the soul of a martial artist, even if he had fallen from the path. Impressed that Ryo figured this out, Zongquan gives Ryo a letter to give to Zhoushan. Upon learning he hadn’t failed his student, Zhoushan teaches Ryo the Wude of Jie, “Judge yourself without conceit and do not show moves thoughtlessly.” Ryo presents this letter to Lishao Tao and recites his new understanding of Jie, but she still declines to assist him with finding Yuanda Zhu. Understanding Ryo isn’t going to stop asking her to change her mind, Lishao Tao has a room set aside at the Man Mo temple for Ryo.

Ryo may show patience, but learning to be discreet is an additional step in understanding the Wude. While further clashes with the Yellow Heads seem inevitable, Ryo is less likely to attract new attention (we hope). I also enjoyed the “humble pie” thrown Ryo’s way after not taking Lishao Tao seriously due to her gender. It was an effective way to get the point across about sexism, while showcasing a wonderful example of how capable women are. This episode also gave us a gorgeous fight scene with the Yellow Heads to give Toonami fans the action they crave. While I wish the fetch quest of doom between Zhoushan and Zongquan could have been abridged, it did help the growth of Ryo’s character – I  hope we don’t see another back and forth this blatant again. And it’s been special to see what I missed in the second game, so I’m hopeful that these positive traits continue, so maybe I’ll look into playing it again!

This has been quite the start to Shenmue II in this latest episode. Our hero is out of sorts and being the architect of much of his own misfortune, and overcoming that while learning patience and making new friendships that will undoubtedly assist him on his journey so far from home. As has been the case thus far with main characters, the spate of new characters introduced have all been portrayed masterfully. I’m thrilled to hear the always fantastic Luci Christian as Joy, nailing her energy perfectly. The action in this episode, emphasizing Ryo pulling his strikes at the last moment to keep his promise, was beautifully animated and a joy to watch. We shall have to wait another week to see what further challenges Hong Kong has in store for Ryo. Still, with Wong meeting with a mysterious figure in the last few moments and with Lishao Tao’s challenge to Ryo’s resolve, viewers can be sure Ryo’s journey is about to become much more difficult.