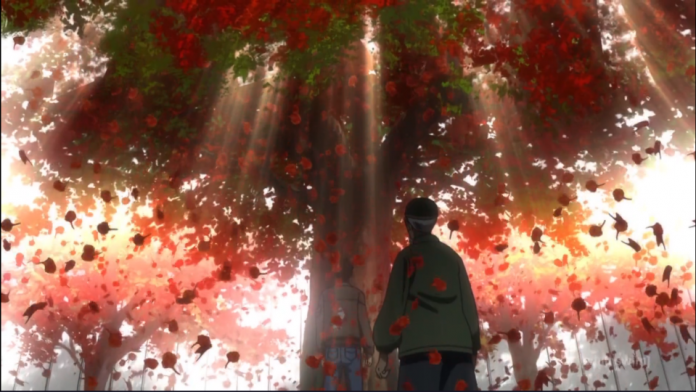 Unfortunately, I didn’t play much of Shenmue II, but what I did play was contained neatly in this one episode (lucky me). I didn’t notice anything missing, but we’re at the point where I can’t give readers a one-for-one comparison. I bring this up because the returning issue that I had during my playthrough came to fruition in this episode, preventing me from continuing. Like Ryo, who found frustration in the time it took him to get where he wanted to be, I got stuck in this section trying to make the leaves fall and ended up not progressing past that. And sadly, this slow burn for the episode felt a bit too slow only to be rushed toward the end when Ryo finally finds his intended target. Still, we see Ryo humbled and taught that all great things take time and effort, which I could’ve learned back when I was playing. But how does that translate with the newest episode of Shenmue the Animation?

Now in Hong Kong, Ryo is stopped by Wong, a young child on the run from some thugs. Ryo readies to deal with them but is robbed by Wong for his trouble, losing his bag (thankfully, the Phoenix Mirror and note weren’t in it). After reporting the theft, Ryo begins his search for lodging, which becomes quite challenging with every place fully booked. Trying to kill two birds with one stone, Ryo impatiently looks around for a place to stay and leads on his quest to find Lishao Tao, the man Master Chen had sent him to help him find Yuanda Zhu. And during his search, he spots an elder man practicing Tai Chi by a tree. The man strangely challenges Ryo to a fight, and shockingly, our hero loses the bout, dropping his note to find Lishao Tao in the process. He takes a liking to Ryo and returns the dropped letter giving Ryo directions to the Yong Ten apartments to aid his search.

Rushing off before the man was finished, Ryo meets with the landlady of the apartments and is told to go to the Man Mo Temple to find Lishao Tao, as they no longer live here. Ryo again takes off in a hurry and arrives at the temple, where he asks a woman if she knew where he could find Lishao Tao. Unfortunately (noticing a trend?), she declines, saying she is only here to pray. Shortly after that, Ryo meets with a priest at the temple who takes his letter but informs Ryo this is not enough to immediately meet with Lishao Tao, frustrating our hero who once more storms off. The woman he met earlier reprimanded him on his way out, saying that the harder he searches, the more he loses sight of what is important, but it falls on deaf ears. Ryo’s impatience is understandable given his bad luck in events thus far in Hong Kong, but it seems to be leading him in circles as he once again meets the older man practicing Tai Chi by the tree. After he learns of Ryo’s frustrations, he offers him a hint if he can learn the Iron Palm and prove it by scattering leaves from the tree all over the ground (after punching the trunk). Ryo tries but isn’t close to mastering it, becoming more frustrated over his lack of progress. Ryo’s hastiness is in stark contrast to the careful investigations back in Yokosuka. At first, I felt it a bit out of character, but given his brazen behavior in the last story arc and the lack of support, it’s easy to see why he’s more uneasy in Hong Kong. When flustered at home, Ryo could lean on Nozomi, Fuku-San, Ine-San, and Yamagishi-San. But in a new country, he is not just desperate, but alone.

I can relate to Ryo’s frustration, as twenty years ago, when playing the game, I similarly struggled with learning the Iron Palm, never mastering the move. I was a lot less patient with this game than with the first (mostly due to it being imported for my Dreamcast). But watching it play out in Shenmue the Animation gave Ryo a new layer for fans to dissect. It’s not common to see him act so callous, fast, and loose with trying to achieve an objective. So far, we’ve watched him learn and pick up new techniques relatively fast, and seeing him falter or stumble a bit gave a human element that I wanted to see more of in the previous episodes. Ryo has been looking invincible, which isn’t relatable to viewers, and plays more into a fantasy of being that tough guy no one fights. Yet to kick off the adaptation for the second game, Ryo is lost, desperate, and stressed to where he isn’t making the same level-headed decisions as before. We can say he isn’t perfect for once, and I found watching this much more enjoyable than him always coming out on top.

Flustered, and with time passing, Ryo continues his search for lodging. He runs across some thugs, a constant beat for this story right now, who try to con him out of money. Not interested (and still frustrated), Ryo throws hands with them before they are scared off by a young woman on a motorcycle named Joy. Fans should realize who she is since she was seen at the beginning of the episode nearly running over Ryo and warning about pickpockets. Ryo thanks her, and she offers both information about his stolen bag (since she knows Wong) and a place he can stay at so long as he says she sent him. And it’s during this conversation Ryo learns about Wong, who stole his bag, and the struggle that locals in Hong Kong are facing. Joy refuses to tell him where Wong is, out of a sense of protectiveness towards him, leaving the two at an impasse.

This episode imparts to viewers a lesson of great importance. All things worth doing take time and effort, unlike instant noodles (this comparison will always amuse me). It also shows that being hasty to solve a problem makes it more complex and slower, not faster and easier. Had Ryo spent a little more time with the man at the tree, Ryo would have been spared an encounter with a grumpy landlady and frustration at the Man Mo temple. He could have spent the time scurrying around on these fruitless endeavors getting the information and skills he needed much faster if he had slowed down and been patient. Due to Ryo being in a new environment and dead set on reaching his goals, his hastiness is relatable. Everyone wants things to go their way whether it be starting a new job, going to school, or something as small as grocery shopping. But, it’s important to take the necessary time to make sure the initial plan goes without a hitch. Ryo skipped so many steps (or glossed over like I might have when playing), and it created a tangible frustration that is rarely seen in anime.

The next day having slept and seemingly calmed down, Ryo returns to the tree before the elder man, practicing making leaves fall. After some practice, Ryo reunites with Joy, and with his promise not to hurt Wong, is told where to find him. Ryo locates Wong, who tries to escape, and leads our hero to the thugs that mugged him at the start of this episode. Our hero handles them convincingly but stops short in striking Wong, promising to leave him alone if he can have his bag back (going as far as to say he wouldn’t call the police). Ryo is a lot more patient with these thugs than he has been with  others, probably due to his promise to Joy and her explanation of their situation. Having Joy, and the man at the cherry tree supporting him have helped to calm Ryo down from his impatience, allowing him to solve the issue effectively rather than running all over the city.

And now, with his bag returned, Ryo demonstrates his prowess of the Iron Palm strike as he made many leaves fall, creating a beautiful scene that was the highlight of the episode. The man reveals to Ryo that this is one of the forms of Wude, Gon – representing the dedication of training. He tells Ryo to talk to the man in charge of the Man Mo Temple again, and then he will be able to meet with Lishao Tao at last. His newfound patience paying off allows him to meet Lishao Tao but is caught off guard to learn the girl he met upon first entry is Lishao Tao. As has been done several times back in Yokosuka, Lishao Tao tries to dissuade Ryo from his path. Though we don’t see his answer, I think we all know Ryo’s not stopping now.

This has been quite the start to Shenmue II in this latest episode. Our hero is out of sorts and being the architect of much of his own misfortune, and overcoming that while learning patience and making new friendships that will undoubtedly assist him on his journey so far from home. As has been the case thus far with main characters, the spate of new characters introduced have all been portrayed masterfully. I’m thrilled to hear the always fantastic Luci Christian as Joy, nailing her energy perfectly. The action in this episode, emphasizing Ryo pulling his strikes at the last moment to keep his promise, was beautifully animated and a joy to watch. We shall have to wait another week to see what further challenges Hong Kong has in store for Ryo. Still, with Wong meeting with a mysterious figure in the last few moments and with Lishao Tao’s challenge to Ryo’s resolve, viewers can be sure Ryo’s journey is about to become much more difficult.