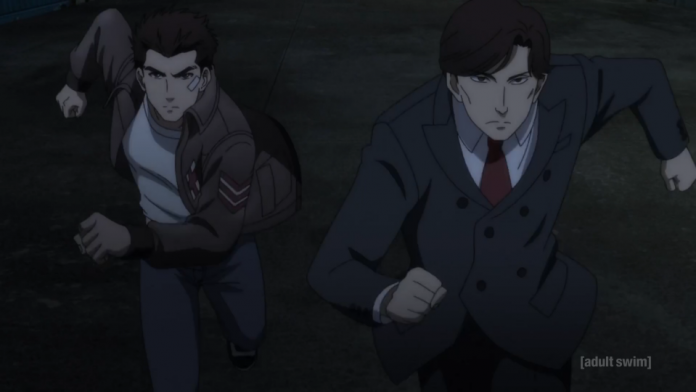 Shenmue the Animation has been quite the ride to this point. Fans (of the games) have had the chance to see side characters utilized more, background scenes getting more attention, and witnessing classic moments redone splendidly to create a wonderful experience for old and new viewers alike. And while I’ll never ask for less moments to be incorporated into the anime, what has made it is something that even oldschool veterans like myself can get behind. We’ve now concluded the first Shemue game, as Ryo is now traveling to Hong Kong to find Lan-Di, giving fans closure on what made the first game a favorite of mine. It seems Iwao’s final words to Ryo to keep those he loves close to him were right on target this week as unexpected allies helped him to save the day in an overall thrilling episode to watch.

Unlike what we’ve been used to in previous episodes, Shenmue the Animation travels back in time before both Ryo and Guizhang knock each other out. We find Goro, who notices the 17 Ryo scrawled down earlier, correctly surmising Ryo was in trouble. And those who paid attention from the last episode realized that Ryo could use the communication system the harbor workers use to grab assistance. Goro discovers that Nozomi has been kidnapped and runs to get help from Mai, who comedically chides him. Not knowing the best course of action (these are high school kids, after all), Mai and Goro head to a forklift where they meet Mark, who ultimately decides to drive the forklift for the rescue. Once they rammed into several Mad Angels and made away with Nozomi, they see Ryo and Guizhang get up, having faked their knockout, adding the perfect mix of context to help paint the picture of what was happening during the main event. And it left me with a feeling of satisfaction considering multiple people Ryo has been involved with came together for a common goal. Having both Goro and Mark meet up like this feels almost like an Avengers moment (that I’m sure other Shenmue fans felt). None of them are proficient in combat, but they are all fighting in their own way to help Ryo, which was invaluable in the grand scheme of things. Without their aid, Ryo and Guizhang could have died due to Nozomi being held hostage (and Nozomi wasn’t safe either). Seeing it all come together instantly had me recall a TOM speech made on the block Shenmue the Animation calls home. Most notably, the “Making a Difference” video that instantly touched fans’ hearts. And while Goro, Mark, and Mai weren’t able to “throw hands” to make a more immediate impact, they took the creed of TOM’s words to heart and helped any little way they could that saved our heroes!

It’s also interesting to see Ryo’s reaction to his friends’ contributions paying off. While it is clear he intended for Goro to find his scrawled number (he had some faith), it’s easy to imagine Ryo expected him to get backup from the Chens. And when backup does not immediately arrive, Ryo momentarily loses faith that Goro would come through. The look of shock on his face when he saw Goro, Mai, and Mark with a rescued Nozomi shows even he didn’t realize the capability his friends had. This can relate to viewers as we likely have friends are capable in areas we aren’t aware of, that can come through when we least expect it. Shenmue the Animation has grounded its plot in incredibly relatable moments like this and has become a major strength.

Now is when fun really kicks up as Ryo and Guizhang take on the ENTIRE gang of Mad Angels spectacularly. And while it was enjoyable to see the two take down an entire army, it is an interesting approach with how one-sided all these battles have been. It’s vital to build up your central figure to become a strong and rootable protagonist. But, making every fight’s outcome predictable can hamper both the growth within the character itself and enjoyment by fans. It is possible to have a powerful character be the focal point, with One-Punch Man being the obvious example. But it fits with the story and led to fans wanting to know, can Saitama be bested? We’ve already seen Ryo demolished after his first fight with Lan-Di (which was also one-sided). So I’m hoping that we can get a bit more drama in the action instead of just a bag job by would-be muggers. It’s not that I don’t like seeing Ryo kicking butt because it’s enjoyable to see him do so, but perhaps letting him struggle more through these fights would help. Although seeing Guizhang finish off Terry was fantastic to watch.

Once beaten, Terry warns Ryo that Lan-Di will be far more difficult to deal with than the Mad Angels were, creating some feasible tension as this arc comes to a close. Not deterred from his mission, Ryo has some parting words with Guizhang, who informs him to call anytime if he needs help in Hong Kong. The mutual respect between these men has been remarkable to watch blossom and gives a poignant lesson about first impressions. At first, Ryo and Guizhang were not friendly with one another and harbored suspicion toward each other. However, they ended up shoulder to shoulder in victory over a familiar foe becoming close.

Riding the stolen bike towards home with Nozomi on his back, Ryo asks if she still wants advice that she mentioned before. Nozomi declines, her decision has been reached, and Ryo’s destination has also been set. It’s a quiet moment leaving much to subtext, but it’s a bittersweet moment seeing the two close, yet knowing they must walk different paths before they meet again, giving some emotional closure that was compelling to watch play out. Deadset on reaching Hong Kong, Ryo says his goodbyes to his friends and family and heads to the harbor to take a boat to Hong Kong. Ryo rendezvous with Master Chen and Guizhang, who helped arrange this transport, and mentions that Guizhang will accompany him. However, Chai has other ideas as he knocks over some beams, one of which crushes Guizhang’s leg and continues to assault Ryo and stop him from reuniting with Lan-Di. Luckily, Ryo has become much stronger and easily handles Chai. Guizhang is crushed that he has to stay behind due to this new injury, but Ryo reminds him how important his father is to him and that they should stay together. Time is precious, and Ryo doesn’t want Guizhang to regret anything that could jeopardize his relationship. After Ryo leaves, Guizhang admits to his father that he cares greatly for him, wrapping up the episode with a bow.

It’s been amazing to watch one of my favorite video games get adapted into an anime series, especially with it being close to 20 years after the fact. It’s surreal that now there’s a much more digestible version of a story that could create more fans of Shenmue, which is fantastic to think about for myself and possibly other fans. While it hasn’t been a perfect one-to-one adaptation and would’ve enjoyed seeing a few other scenes glossed over, I am over the moon at how amazing this series has been so far. Now the series transitions to Shenmue II, and I’m excited since I haven’t played much of it. So I’ll be in the same boat as most viewers who have been checking out the Toonami original.