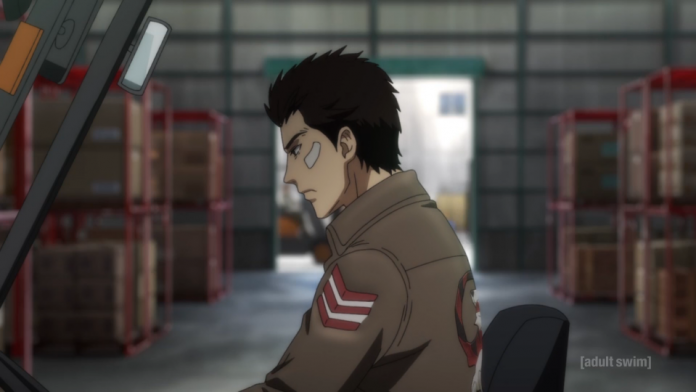 As we near the finale of Shenmue I, the themes of family and discovery are brought to the forefront. Despite being around his father, Ryo isn’t as familiar with his history, which is the focal point for this episode. But it’s not just him, as Guizhang is trying to learn the balance of being the son of Master Chen while he stays in service with the Chen gang, and there’s a massive revelation for Nozomi, who might have to move to Canada?! Let’s get into it as we explore the newest episode of Shenmue the Animation.

The episode begins with Ryo looking for a ticket to Hong Kong after learning more about Lan-Di. Sadly, the prices are outrageous, but after seeing Ryo’s frustration, Fuku-San kindly offers his savings to help. Ryo is still short of the funds he needs and decides to look for work to cover the rest. Heading down to the harbor, Ryo runs into the would-be mugger he trounced before, Goro Mihashi. Goro previously witnessed Ryo entering the Chen’s front business, Jiu Feng Co., and decides that Ryo is a bigshot and offers to help his “bro.” While Goro initially looks into robbing others, he later offers to find work for Ryo at the harbor. I guess Ryo still wants to find out where the guys at the port hang out.

Goro takes Ryo to meet with Mai, which is a surprise to Goro that the two know each other (leading to some cute moments between the two) and leads to Mai helping find a job with the Alpha Trading Company. And let the meme of Shenmue and forklifts continue as fans get to see the much-anticipated forklift job. Ryo, “the forklift driver,” gets to show his ability at the position while being under the watchful eye of Mark (a coworker). Much to Ryo’s dismay, he is quickly brushed off, left to learn most of the work himself (some trainer), giving the impression something is amiss between the two.

After a hard day of driving, Goro offers to show Ryo around, so he learns where he is and isn’t safe since the harbor is Mad Angels territory. While Ryo is informed about the Mad Angels, Guizhang is troubled by Ryo’s statement from the previous episode about always being his father’s son. It left a mark on Guizhang, primarily due to his constrained relationship with his father because of work. Guizhang’s connection to his father is quite strong, as we’ll see later in the episode, but he has to pretend it isn’t. So when Ryo asked him what he’d do if his father was murdered, it hit a nerve and shows how powerful family ties can be from external factors. This moment drives home the importance of family to Guizhang, showing that while he pays lip service to what his father wants, it seems that he wants a similar bond to what Ryo had. It’s comforting to see and continues to be a driving force for both characters! And we see that in full force later in the episode when Guizhang teaches Ryo a new technique called the Swallow Dive. And it was here where Guizhang was finally honest about his feelings and confirmed he’d act the same if his father passed away.

And Guizhang wasn’t the only one inspired by Ryo’s familial drive. Our former thug Goro never knew his father and never went to great lengths to find answers. He is determined to help Ryo uncover what he can in hopes of doing the same. I’m impressed at the level of depth Goro got in this episode, as it didn’t feel too much or too little, adding that nice blend that Shenmue the Animation has continued to showcase. It’s a brilliant choice to continue to push the importance of one’s familial connection. Who knows, Goro’s lack of a father may have been what made him a thug, yet seeing Ryo chasing answers about his father inspired him to become a better person. Many argue about the importance of a stable family, and we see an interpretation of that in a series and game I never thought of until recently. We long to have our families by our side to help when things are rough; they are often the first line of support, and losing a vital member of that can have terrible consequences. Although I guess Goro wasn’t completely inspired, as he decided to back off in helping Ryo after learning that the gang might have been involved with Ryo’s father’s death. Surprisingly, Mark (eavesdropping) also strongly reacted to hearing this, changing his expression from disgust to interest.

Ryo finally meets with Nozomi later (who has been looking for him for quite a while since he started a new job), expressing great concern for Ryo. Still, Nozomi reiterates her support for Ryo before returning home and is confronted with the daunting question of moving to Canada to live with her parents. Given her connection to Ryo, Nozomi isn’t sure how she feels about this o, making viewers wonder if Nozomi views Ryo as her family (as a partner), with a hard choice now befallen on her. A difficult conundrum for anyone, as ‘family’ isn’t just those we share blood with. While leaving Japan would reunite Nozomi with her parents; it would tear her from someone she clearly loves. This scene was heart-wrenching to watch. And many can easily empathize with Nozomi’s dilemma.

And while Ryo has been looking into the Mad Angels, it appears they have been learning about Ryo too. After defeating Charlie, the Mad Angels have been trying to figure out if he has any association with The Chens, which could hurt the balance of power. So after doing some digging, they learn about Ryo’s connection to Nozomi and end up kidnapping her! During these small moments, my appreciation of this adaptation comes to fruition. It gives us many context clues that the games failed to do back when I recall playing them. Seeing Charlie make his plans, the Mad Angels make theirs, and even visually seeing Nozomi trying to investigate the Mad Angels before being caught are all things that happened off-screen in the games but have been shown to us here.

Back at work, Mark starts being friendlier with Ryo, assisting with the trickier parts of the job, showing a change of heart. Ryo confronts Mark but is told to get home soon due to an early start the next day. The two separate, and Mark is quickly assaulted and pushed to the ground by the Mad Angels, who demand answers about their new hire. Ryo rushes to the disturbance, starting a fight with the Mad Angels (which Ryo wins, of course). Mark quickly thanks Ryo and informs him he is trying to find his brother, who joined the Mad Angels, creating a possible new bond since both are looking into the gang due to family matters.

Once home, Ine-San asks if Ryo has seen Nozomi since she never returned to the flower shop after making a delivery. Ryo storms out of the house only to be confronted by a person on a bike who informs Ryo that Nozomi has been captured and must hurry to see Terry at warehouse 17. Ryo commits grand theft auto and rushes to the warehouse to save his friend. Once there, Terry promises to release Nozomi if Ryo shows he isn’t a threat by killing Guizhang. Ryo relents and finds Guizhang, saying they must fight and not ask questions. The two duel as Terry looks on in glee before knocking each other out with the Swallow Dive, leaving them on the ground.

What an episode for everyone to enjoy, and it had so much going on too! What made it more satisfying was the theme of family that was littered throughout the story. Between Ryo’s quest for answers, Goro’s wishing he could do the same, Guizhang being honest about his familial connection, and Nozomi’s choice between her parents and Ryo. Our heroes are struggling, and it shows us more depth than previously established to compare and contrast. Everyone cares a great deal for their loved ones, which should resonate with the viewers.

We are closing in on the end of the first Shenmue game! There should be one or two more episodes before Ryo reaches Hong Kong, which is the beginning of Shenmue II. I am still absolutely loving this voice cast and hope that things continue to impress the more we hear them. I’ve thoroughly enjoyed the main characters’ performances, with Jeremy Gee’s Guizhang stealing the show this go-round. Gee showcased an impressive emotional range from concern with his father to admiration towards Ryo and trepidation with his apparent bout with Ryo. I eagerly await what excitement the climax of the original Shenmue will look like in the following weeks!