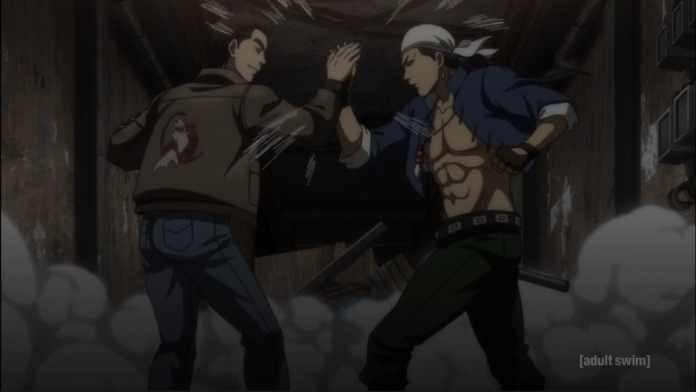 I feel like I’ve transported ten years back in time. No, not twenty years (when I was playing Shenmue), but when I saw the first Avengers movie (stay with me here). While there hasn’t been a major collaboration of other SEGA video game characters like Sonic and friends jumping in the latest episode, I’m referring to an action-packed thrill ride payoff. In 2012 there had never been a superhero movie on that scale that captured the imagination as the source material did. In years prior, I was elated to see Hawkeye in Thor, Black Widow in Iron Man 2, etc. That was all I’d needed, but when the Avengers assembled, it blew my mind in a way that hasn’t been touched by a media property. And while I’m not saying this series is a hit like the first Avengers film, I enjoyed the last two weeks of Shenmue the Animation for shaking up the status quo and adding such high stakes to the narrative. I feel justified for sticking with the series, just like when fans got to see the entire Avengers team together in 2012. The buildup may have been slow, but this go-round went off like a wildfire, touching on everything set up previously to give myself and viewers a complete package. So how did this chapter ignite such feelings in me to compare it to the blockbuster hit?

Being the genius rogue he is, Ren suggests not to bother fighting and leads Ryo over a narrow plank covering a gaping chasm before knocking the board in as they flee from Dou Niu. Normally, you’d think that was the end of the action, but the energy stays intense as Yuan shows and attacks with a chainsaw! That isn’t the weapon of choice I’d expect in a gang. Still, Ryo quickly stops Yuan’s Jason Voorhes impression by toppling a supply shelf onto him, highlighting how dangerous assaulting the Yellow Heads can be for any foe. And while the two are dodging certain death, Joy and Wong argue about helping Ryo. However, this is put to an abrupt end when the Yellow Heads start recognizing her motorcycle due to them initially chasing Wong since Joy rescued him earlier. Knowing she cannot hide from involvement anymore, Joy devises a plan to keep the Yellow Heads distracted while Wong tries to assist Ryo and Ren.

Shenmue the Animation is, first and foremost, an action series. Yet that hasn’t always been the case. I’ve been recently down on the series because of  how repetitive and formulaic the series has been, offering little drama or battles of substance. However, having this episode start with some hard-hitting action helped grab my attention from start to finish. Between Dou Niu bowling through walls like the Kool-Aid Man and Yuan’s crazy antics, it was a non-stop thrill ride! These scenes add an interesting dynamic where I’m taking the Yellow Heads seriously yet can also enjoy a certain comedic charm without reducing the threat level. The danger is real, but with Yuan becoming more unhinged, I wouldn’t be shocked by those laughing at the absurdity of the whole affair. It feels like a Three Stooges routine, with Ryo and Ren managing to jump-kick thugs’ heads in unison mid-chase.

Their ability to work in sync was another high point. The last time Ryo and Ren were in a fight against the Yellow Heads together, they were handcuffed and clashed. Much of the opposite was occurring this time as they worked together without having to ask about a plan. Ryo has influenced everyone he’s come into contact with, strengthening the bonds with his burgeoning allies, which significantly helps the series. Their bond is deepening, which benefits the drama and action as they appear like a team rather than individual fighters. Both trust each other, and its display is a gift to viewers who have been invested. As TOM would say: “if you want a good friend – be a good friend,” and we see this between Ryo and Ren as their companionship grows from mere acquaintance to being buddies through mutual trust and aid. This development is common for a shounen anime, but it works well because it’s something we all want. And it’s typical for a reason because it allows the audience to watch our heroes grow, making the story more compelling. In Shenmue’s case, it also allows the combat to change into a more exciting form due to their newfound tandem attacks, keeping the action fresh.

Joy follows through with her plan (sticking with the theme of helping friends), introducing herself to the Yellow Heads as the daughter of Chun of the White Tai. And while viewers might not care about this distinction, everyone in the scene was taken aback as if they were in the presence of royalty or a ghost. The White Tai was involved with gambling that ultimately destroyed the family. Many believed everyone was dead, but Joy is banking that her bluff will get her audience with the top brass of the Yellow Heads. But is this a bluff? We were privy to Joy’s flashback that suggests this is her family history, making some believe her statement is true. Even Wong was shocked, realizing the weight of that name. Not sure what to do, Dou Niu orders his men to lock Joy up in the basement while they can sort things out. And while the two wait (before Joy is captured), Wong sneaks through the vents to move around the hideout to try and locate Ryo and Ren. Joy puts up a decent fight as she’s being taken away, but an oddly dressed man (I have no idea, but welcome to anime) in a mask knocks her out. Thanks to her sacrifice, Wong manages to fall into Yuanda Zhu’s prison cell, finally putting everyone into place for the Shenmue ‘Avengers’ to assemble.

What comes next feels remarkably like a Marvel Cinematic Universe story arc conclusion, as several disparate threads seamlessly form together to make a fantastic narrative. Almost like a “butterfly effect,” a lot of the storytelling pieces served a purpose to help progress the story in a way that felt satisfying. Joy decided to face her fears, and getting kidnapped gave Ryo and Ren an immediate objective that ultimately would provide more support in saving Yuanda Zhu. And thanks to Wong convincing Joy to do so, they gave him the window to slip from the Yellow Heads to help rescue Ryo and Ren. But that didn’t happen, as he ended up finding Yuanda Zhu. If all of that hadn’t happened, Yuanda Zhu might have been lost, forcing Ryo to start from scratch. It’s a fantastic way to create a story, as I have always been a fan of stringing things together that might seem random but play a valued part in the narrative. It’s captivating, and I hope that Shenmue fans and those watching on Toonami had a similar feeling to what I had when seeing it play out.

And the amazement continues as Wong finds himself in some trouble with Yuan while rushing into Yuanda Zhu’s cell. Thinking quickly, Wong decides to use the rats that have followed him in the vents to scare Yuan away and make a getaway. Wong pushes Yuanda Zhu (who proceeds to bash some heads in as they go) in his wheelchair out of the cell to make their escape! This excitement is halted when Dou Niu shows up, sadly putting a kibosh on their breakout attempt. And he isn’t alone, as Yuan regains his composure and tries to retrieve Yuanda Zhu. Unfortunately for him, he stumbles upon Ryo and the gang and continues to fight despite how out of sorts he has been. Ren was able to handle him easily, handcuffs him to an elevator, and begin to interrogate him on the transfer of Yuanda Zhu. Yuan is initially uncooperative, but Ren was able to change that by threatening to pour a bunch of garbage all over him (realizing how much he dislikes messy things). Yuan quickly folds and is rewarded with, you guessed it, trash all over him as our heroes head to the rooftop, adding a bit of levity that I enjoyed in an otherwise suspenseful episode.

Ryo and company make it to the rooftop only to be greeted by a helicopter.The symbol of the Chi-You Men is emblazoned on the vehicle making many wonder who is in it, giving the viewers a sense of anticipation. And wouldn’t you know, the main antagonist, Lan-Di, exits the aircraft putting Ryo in a rage ending the episode on a fantastic cliffhanger.

This week, viewers were in for a treat with how well the story progressed. A high stakes finale has been woven from smaller bits and pieces, giving new life to already solid aspects. Seeing Joy’s background come to fruition was particularly gratifying as we saw her return to her helpful self and get a clear picture of her family history. But if I had to pick one thing that made this episode shine, it would be Wong. Similar to back in Yokosuka, where Ryo’s friends helped without being fighters, Wong has made arguably the most significant difference in this stage. Being sneaky and quick on his feet, Wong delayed Yuanda Zhu’s handover to Lan-Di, which allowed Ryo to face the target of his wrath. Dou Niu may have prevented Yuanda Zhu from escaping, but Wong bought time. Without Wong’s actions, Yuanda Zhu would be in Lan-Di’s hands, and Ryo wouldn’t have seen his archenemy.

I am in absolute awe at how gripping and action-packed this gift of an episode was, leaving me wanting more! I enjoyed much of the series, regardless of my issues with the previous story arc. The payoff here is good; it supersedes my enjoyment of even the last two entries I praised for upping the ante. With a pivotal rematch between Ryo and Lan-Di most certainly on the table, the season finale is shaping up to be incredibly promising!