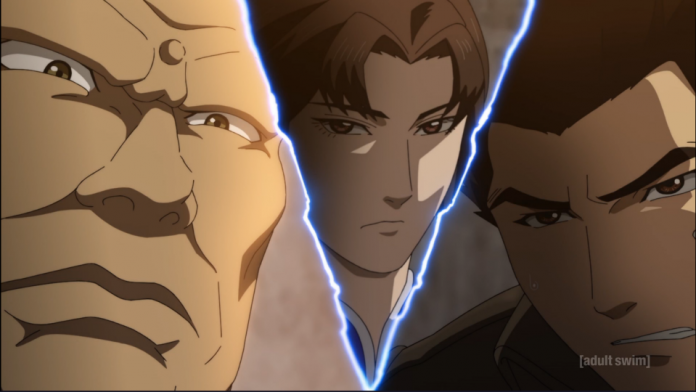 After several slow, repetitive, plodding episodes, Shenmue: the Animation returns to its roots and gives viewers compelling drama and action that has been sorely missed! Ryo and Ren’s buddy cop dynamic, the Yellow Heads becoming a serious threat, and a heartwarming final scene gave this episode the complete package viewers have come to know. There’s no predicting where things will go, and that’s incredibly refreshing (unless you played the game). And we finally get a clearer picture of the dichotomy of the darker side of Hong Kong (and rival gangs) after our heroes take a jaunt into the underworld. I have been craving this much-needed change of pace, and seeing it play out left me extremely satisfied!

Ryo somberly bows to the Man Mo temple as he leaves, showing his appreciation for all that was done. After saying his goodbyes, Wong escorts Ryo to meet with Ren, who immediately hits Ryo with twenty questions wondering why he thinks he can see an underworld bigshot like Yuanda Zhu. As expected, Ryo produces the letter from Yuanda Zhu, satisfying our new friend’s curiosity. Ren sets up a meeting with someone who once worked for Yuanda Zhu, named Yang, who initially is hesitant in assisting Ryo. Luckily for Ryo, the same letter that quelled Ren’s inquisitive mind offers similar results with Yang, who sends them to a heavily guarded location, proving how resourceful our hero has been. Things aren’t looking great as Ren is immediately distrustful of the security detail in the area. This concern is quickly justified as a trap set by the leader of the Yellow Heads, Dou Niu, who catches both Ryo and Ren.

Now captured, the antics of Ryo and Ren are center stage as they deal with being tied together, becoming the high point of the episode, and offering more insight into Hong Kong. The Yellow Heads also are after Yuanda Zhu, and since they continue to see Ryo roaming around, they think he might have more of an inside track to locate him. Ren becomes furious about running into this rival gang and chastises Ryo for not telling him about their involvement, creating a rift between the team. Realizing that arguing won’t help, the two start to work together (crazy idea) and attack their way out of the cell. The two are now forced to put their quibbling aside (though Ren still complains) and manage to take out several Yellow Heads while tied together. It provided a great action sequence and was incredibly comical to watch, adding life to an arc that desperately needed it, especially after the final jump to another building!

While this was going on, the Yellow Heads were speaking with Lan-Di, wanting to ingratiate themselves with another organization called the Chi-You Men in a bid to control Hong Kong’s underworld. Viewers may remember that this is the organization Lan-Di belongs to and have nefarious plans for the mirrors. During their meeting, Lan-Di becomes curious after Dou Niu mentions that a ‘Japanese kid’ is in custody who is connected to Yuanda Zhu, seemingly wondering if it’s Ryo. This moment adds a bit of intrigue since Lan-Di is showing some interest in Ryo, much like how Ryo is with him. While this is going on, Ren convinces Ryo to tell him about his target  (Lan-Di), and turns white at the thought of dealing with the Chi-You Men. Ren remembers spotting the Phoenix Mirror in Ryo’s belongings despite his fears and insists he sticks around to grab some treasure, keeping this new team together.

I overestimated Ren, thinking he was more complex than he was, and seeing a pretty mirror and potential dealings with underworld moguls put dollar signs in his eyes. I still enjoy Ren’s high-energy antics and comical personality, which clashes with Ryo perfectly. It’s exciting to see them work together as they seamlessly cover each other’s weaknesses. Ryo isn’t savvy about the underworld and trickery but is fearless in the face of danger. On the other hand, Ren knows the dark side of Hong Kong too well and wants to avoid as much conflict as possible. While this dynamic should be beneficial, it proves to be a double-edged sword. This personality is unlike any other relationship Ryo has made at this point. Most of his allies have been harmonious with him, but Ren seems different. Ryo had to rethink how he works with others with this new friend, since Ren won’t just do what he asks without pushback. Thankfully, their partnership proved invaluable in their escape, though it was a problem they gave themselves. Being so different  is how setbacks can be depicted in a way that doesn’t overly frustrate the viewers and gives an injection of reality (that I love from characters). Our heroes digging themselves a grave only to tear themselves out of it shows their strengths and weaknesses in a way that works with the plot rather than against it.

After making their daring escape, Wong removes the handcuffs off Ryo and Ren before they head back to Yang. Understandably, the two are livid from the apparent setup. Yang, for his part, is apologetic, telling our heroes his hands were tied as the Yellow Heads had leverage on him. He tells them that while he doesn’t know where Yuanda Zhu is, he suggests a person known as ‘The Wire Tapper’ might. Luckily Ren knows who that is and leads Ryo to where the individual lives. While The Wire Tapper’s not there, Ryo finds a pile of tapes and begins listening to them for leads. Most of them lead to dead ends. However, Ryo eventually discovers on a recording that the Yellow Heads have captured Shuqin (the man who referred Ryo to Ren) and rushes to help save him. Determined to rescue someone who has helped him, Ryo tries to discern where Shuqin’s abduction occurred. While he is unable to do so, Ren catches onto a bird chirping, leading him to deduce that the recording took place at the bird feed store.

Speaking with the store owner, the two figure out that Dou Niu’s right hand, Yuan, is a frequent customer at the shop. Upon spotting him, they tail him to his apartment, cold cocking him when he answers his door. Before they can leave, Dou Niu starts knocking on Yuan’s door, and Ryo suggests they hide in the closet to avoid being captured again. Dou Niu eventually busts in and Yuan’s bird is endlessly repeating ‘let’s hide in the closet!” And while I’ll never say no to tension, it lasts for a few moments, as our heroes foil Dou Niu’s attack and lock him in the closet. Shuqin thanks the duo for saving him and tells them he found out that Yuanda Zhu is at a place called the Ghost Hall Building. Finally, after all this time, Ryo is face-to-face with Yuanda Zhu, but he isn’t alone. Dou Niu and his flunkies were tailing him in an effort to kidnap Yuanda Zhu. What a fantastic twist! Just when their objective was in reach, it turns out that they were being used by the Yellow Heads the whole time! If that wasn’t enough, Ryo is dramatically knocked out of a window. All seems lost, and then Xiuying appears as backup, ending the episode on a thrilling note!

We’ve gone from one of my least favorite episodes to my favorite in the series. Shenmue works best when it plays with intrigue, action, and character moments. The studio had minimized these aspects during the last four weeks, but the series has returned to form. I began to worry that my love of Shenmue must’ve been nostalgic for the first game, but this episode proves otherwise, as I have been delighted while watching it. Being surprised by things such as the Yellow Heads using Ryo and Ren to find Yuanda Zhu or Xiuying making a dramatic return to save Ryo was precisely the development I wanted. It was also fascinating to confirm that Xiuying’s brother left for revenge. While it was apparent before, having it laid out in a flashback is appreciated. It wasn’t just the big plot moments that worked; little touches like the parrot being intimidated by Ren go a long way to adding more elements to this series. I loved the comedy (intended or not) involving Yuan’s parrot and it repeating everything it heard. Toonami fans love action, but having genuine funny moments give it a charm fans will remember later.

Ryo’s journey has led him into the underbelly of Hong Kong, making powerful enemies in the Yellow Heads, who used him to find Yuanda Zhu. Fortunately, Ryo made strong allies in Ren and Xiuying, who will stand at his side regardless of the danger – albeit for different reasons. We’re in for a culmination of the search for Yuanda Zhu, the story with Xiuying, and the fight with the Yellow Heads next time, all exciting prospects. It’s taken its sweet time getting there, but at last, the Shenmue II portion of the animation is as breathtaking as the events of the first game!