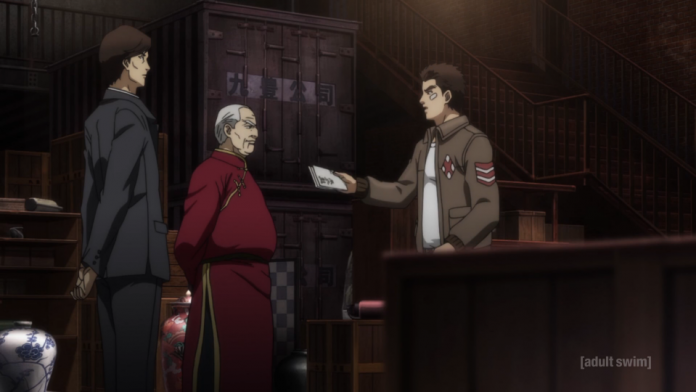 We are now three episodes into Shenmue: The Animation, and I continue to be spellbound by its brilliant adaptation. So far, this series has been flooring me with both its faithfulness to the source material and adding additional context that fits well with the existing lore. Seeing side characters like Yamagishi-San take a more active role in the story has been an exciting revelation; adding additional moments for already important characters like Nozomi Harasaki has been thrilling! On its own merits, the series is beautiful, well animated, and a bit of a throwback to the bygone era of early 2000s action anime in styling. It’s also fun to see gameplay elements in the series – be it Ryo’s infamous search for sailors or various locations such as the arcade being highlighted; it’s been gratifying to watch a classic game come to life again.

As with the previous two episodes, we look at Shenhua in Bailu village, which is interesting since she had no significant presence in the story at this point in the video games. And this isn’t the first time the series chose to start with her, adding a ton of importance to these scenes. Her speech is repeated, but something interesting happens when she interacts with another villager who casually asks her who she is referring to in her diatribe. She gets flustered and states the obvious – that she has no way to know, giving her more personality for viewers. I wouldn’t be surprised if she becomes a huge favorite for Toonami fans, and I love seeing some development with her this early in the series.

There’s a brief scene involving the Mad Angels, who we learn more about later, as they discuss Ryo beating Charlie and how they’re going to deal with him. And while not much occurs during this scene, I appreciate what Shenmue the Animation is trying to do by fleshing out other little moments to add better context for viewers. Once again, early setup not present in the game but fleshed out here makes me happy. And considering I’ve brought this up in every review so far, I cannot stress how impressive this series has done by giving fans both old and new context that the games didn’t. I can’t recall any other series continually giving its audience the amount of setup considering how old the source material is.

Ryo continues searching for someone to read a letter addressed to his father. He would later find the boy he rescued the soccer ball from who lives at the pottery store he arrived at, and luckily enough, the boy is the owner’s grandson. After learning of Ryo’s heroics, the Pottery store owner gladly looks at the letter and says it is written in mirror characters. Written is indeed a note from Yuanda Zhu, warning Iwao of danger coming. Additionally, it states that if help should be needed, seek the Chens for assistance. A phone number and a strange listing of phrases round out the letter – Father’s Heaven, Nine Dragons, Mother’s Earth, and Comrades – giving the impression of some code.

With a new lead, Ryo tries to call the number and is met with the first word on the list of phrases in his letter (Fathers Heaven). Ryo repeats it back, but instead of the conversation continuing, the other line hangs upon him. Picking up that this string of phrases is a code, Ryo calls back and responds with the rest of the code written and is told Warehouse 8. Ryo, unsure what to do now, calls an information number to learn where the phone number is located and realizes it is in the warehouse district in Namihama. Ryo reaches the warehouse district and finds himself in a brawl after he stops a mugging. While he saved an innocent stranger from the battle, the adversaries decided to take on our hero, who promptly mopped the floor with them. After being defeated, the would-be mugger tells Ryo where the warehouses are and tells him most of the guards get off at 7 p.m.* Ryo waits for the appropriate time and would sneak by a guard, only to be caught red-handed by the Chens.

*Quick anecdote: When you’d play the original games, you had to wait till 7 p.m. in-game time to progress this part of the story*

Thankfully, instead of a brawl breaking out, Ryo is released by Master Chen, who believes that he is the one who called. Ryo hands Master Chen his letter, and authenticates that it indeed came from Yuanda Zhu. Indebted to Yuanda Zhu, Master Chen agrees to help Ryo, revealing the existence of a second mirror (Phoenix Mirror) to Ryo. The mirror Lan-Di stole was the Dragon one, making the legend Shenhua spoke of make slightly more sense. Following this meeting, Ryo is determined to find the Phoenix mirror as many of the puzzle pieces are coming together.

Something of note is that this series is moving quickly, as it’s approaching the plot of Shenmue II. I was many hours into Shenmue when I got to this part. And while I understand a television series isn’t going to want to have a long adaptation, especially considering how grinding and searching can be tedious, there’s a certain lost charm in how fast this series has been moving. The search for the Phoenix mirror was one of the most memorable plot beats in the game when I first played, and I was hoping for Shenmue the Animation to give the search for the Phoenix mirror more of a beat. I am somewhat disconcerted about the pacing, but I think this affects more fans who played the games over the general audience.

The following day, more hijinx occurs around the house as Ryo learns his father left something critical with an antique dealer. Ryo locates him and discovers the thing Iwao had stored there was the family crest, which he takes (despite not knowing why it’s so essential). Later, with the assistance of Fuku-San, Ryo discovers a matching hole for his family crest and a sword-shaped hole behind a banner. Ryo puts the crest in the marked spot that it matches and a sword from the dojo in a different location, opening a secret room where Ryo enters and finds the much-desired Phoenix Mirror! I was heavily hit with nostalgia on this scene, especially when  Ryo found a photo of Iwao. This sequence was beat for beat precisely the way I remember it while playing.

Acquiring the mirror, Ryo quickly takes it to the Chens; unaware Chai is tailing him. Master Chen would then tell Ryo that supposedly when the Phoenix and Dragon Mirror meets, a portal to heaven will appear, and a mythical creature known as Chi will destroy everything. Lan-Di is a member of the Chi You Men group, who wants destruction. Before more can be said, Chai busts in to steal the mirror and was thwarted thanks to Ryo moving objects from under Chai’s feet. This scene was a treat to watch, giving fans classic action and adapting a rather famous quick time event (QTE) of Ryo pushing a button to stop Chai (Shenmue famously invented QTEs).

Master Chen recognizes Chai as a lower-ranking member of the Chi You Men, who has ties with a rival gang, The Mad Angels (told you they’d come up again). The Mad Angels have risen to power recently through weapons and illicit drug sales. They are also likely the ones who brought Lan-Di to Japan, and it’s speculated Lan-Di’s next stop is Hong Kong, to go after Yuanda Zhu due to his involvement in smuggling the mirror into Japan in the first place. Ryo insists on going to Hong Kong, and while there is a back and forth arguing over it, Ryo is too headstrong to stop, so he continues on his investigation. The episode closes on a shot of Lan-Di leaving Japan by boat, showing the truth of Master Chen’s speculation.

With plenty of action and lots of exposition, the third episode of Shenmue: The Animation sped by a lot of content quickly. I am delighted with the quality of the adaptation, yet I find myself concerned with how close to the end of the first game we are already – which leads me to worry they’ll try to cram all of Shenmue II into the rest of the series. I know the first game far more than the second, but I know the second game is considerably more expansive and deserves not to be crammed into the rest of the series. And while I’ve commended the context the series has given, there’s always more that could be explored.

There’ve been several bit-characters that are incredibly entertaining within the games that we’ve either barely seen or haven’t seen at all. It doesn’t detract too much, but it’s a bit saddening for veterans like myself. Unlike last week I didn’t see any significant character expansion, but seeing Master Chen and Guizhang in action again was fun. Their complicated father-son dynamic was a joy to watch. I particularly enjoyed the telephone back and forth because this was a massive part of the games. Overall, I’m impressed at how much Shenmue the Animation leaves me ravenous for the next episode!