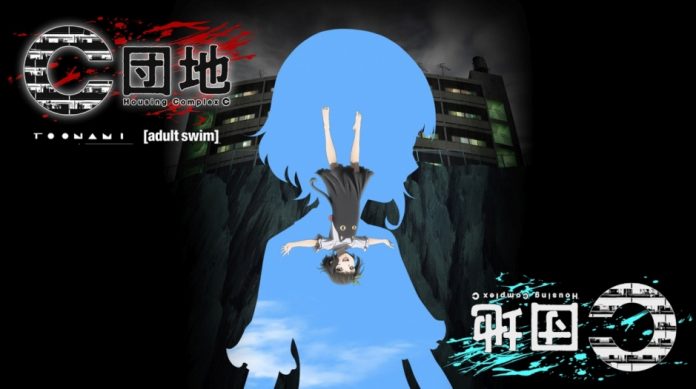 As we welcome the chilly month of October, it’s a perfect opportunity to premier a spooky original series, Housing Complex C, a co-production between Adult Swim and the incredible people at Production I.G. (we love you, Maki!). The trailers have been titillating enough to whet our appetites for an exciting horror-action series, which will be four episodes long. But how will this original fair amongst the Toonami Faithfuls? Luckily, we could preview the first episode to give fans some insight into what to expect!

The series occurs in a low-cost housing complex as the residents begin experiencing strange and horrific occurrences. At the start, we are thrust into the action with a frightful and violent sequence of events and given no context to what is happening. This flash forward is especially unnerving to the viewer as we are pulled back ostensibly to the beginning, a calm seaside apartment complex with several residents sitting outside and enjoying the view. The juxtaposition of the two images early on did a great job of unsettling the viewer. It’s a classic technique in horror fiction that continues throughout the first episode, much like the early scenes of Gore Verbinski’s adaptation of The Ring, or Takashi Shimizu’s The Grudge  .

We are introduced to a colorful cast of characters who live in the complex, the most memorable being Kimi, a precocious little girl. In order to alleviate the heat of summer, they decide to search a tunnel that runs underneath the building. Upon further exploration, they discover a storage room with some interesting goodies, and further along, what looks to be a more ancient tunnel. Throughout the episode are several “fake outs” – startling moments where you expect something awful to happen, but it ends up being something mundane. It’s a great way to set the viewer on edge but also get you to let your guard down.

I was somewhat surprised by the mostly lighthearted tone of this first episode, however, there is an undertone of something darker at play. Kimi’s energetic personality is balanced by the other girl introduced, Yuri. Yuri’s family has recently moved into the complex, and her calm, quiet demeanor nicely compliments Kimi’s.

I particularly enjoy the music in the series so far. The creepier scenes feature a slow, eerie piano playing, which perfectly sets the mood. I also loved the use of camera close-ups and Dutch Angle (think The Third Man, classic movie fans) to enhance the sense of disquiet one has while watching. A good example is a sequence in which we see Kimi speaking to her mother and relaying the story of her adventure in the tunnel; the camera focuses only on her face, and you never see or hear her mother respond. The effect is very disconcerting but leaves the viewer wanting more. While the animation is not particularly groundbreaking, the use of sound, lighting, and imagery does a fantastic job of putting you on edge. It’s a good sign of what to expect as the series progresses into the more intense situations hinted at in the beginning.

Based on this first episode’s pacing, it’s hard to say how they plan to tell an entire story in 4 episodes, but I’m excited by the visual and audible indicators of a potential horror to come.

Happy Kuro Kitty is a writer for Toonamifaithful.com. Feel free to follow Kuro on Twitter @HappyKuroKitty, or hear Kuro on the latest episode of the Toonami Faithful Podcast. Special thanks to VLordGTZ for help with this review