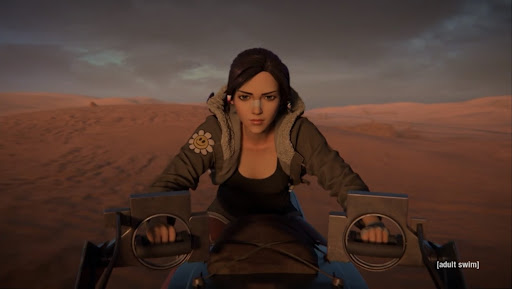 The season finale of Blade Runner: Black Lotus brings the final confrontation between replicant and creator as Elle comes face to face with Wallace Jr., the man responsible for her existence and pain. While Elle’s hands are full with Jr. and Water Lily, Joseph (still injured from his altercation with Marlowe) prepares to put a stop to the Wallace Corporation’s plan to mass-produce replicants. This exciting episode provides tons of action and should leave fans with a satisfactory ending to Elle’s story of revenge and acceptance of self.

The opening scene goes straight to the action with Elle taking out security guarding the elevator and door to Jr.’s office. Elle surprisingly is allowed in, with Jr. boasting about his clairvoyance of her presence. The fateful meeting begins as the two talk, with Elle questioning, “Why me?” which is valid to ask for someone who endured a tremendous amount of suffering. And seeing this brings to mind how I’m sure a lot of wish we could be in a position to ask a creator why. Whether that be a parent, higher being, whatever the case may be, having that opportunity is something many would want, and having Elle have that chance is something special. For my background, I live in the Deep South, so religion is everything (as is football). When going through trials and tribulations, those who are religious will ask God why bad things are happening, and wonder what was done to deserve this treatment. Instead of answering, Jr. goes on about Elle being free from her suffering and tiring life soon since her existence wasn’t intended to last long, which can also show the negative outcomes when asking this sort of question. Elle wasn’t meant to be around for as long as she was, and hearing how disposable Jr. feels can leave a sour taste in anyone’s mouth. I certainly wouldn’t want to hear a similar speech.

Feeling threatened, Elle charges at Jr. but cannot harm him, which our heroine hasn’t experienced since the doll hunt, as viewers saw during Elle’s flashback. And while Jr. watched as Elle was feeling hopeless, he clues her into the very question she’s been wondering since the first episode. Elle was meant to be his“angel of death,” created to clear a path to take over the Wallace Corporation. It would appear that Jr. planned everything in Blade Runner: Black Lotus to happen as it had, with the death of everyone who participated in the doll hunt, to allow his hostile takeover and build a world in his image. The god complex is real, and it leaves Elle in a peculiar spot considering she paved the way for it to happen. Water Lily mysteriously appears (having been in the room the whole time), and round two of the replicant tussle begins! This scene didn’t disappoint as we witnessed a final seamless fight between equally skilled opponents, becoming a definitive signature for Blade Runner: Black Lotus.

As Elle continues to hold her own against Water Lily, Joseph uses his skills to gain access to the room that is storing the replicant organisms (that fans saw in previous episodes), and uses the strength he has left to put explosives on each container. Sensing something is off, Jr. leaves his office (and the fight) and joins Joseph, sharing a vision of the future of his replicants’ existence around the world and eventually making it to space. Joseph wasn’t feeling this plan and held the detonator up, ready to make sure Jr. wouldn’t be able to move forward. Elle breaks away from the skirmish to see how the plan devised by Joseph and herself has been going. Elle would then enter the room housing these new replicants to find Joseph and Jr., but Water Lily intervenes again as the bloody battle continues. Water Lily ends up stabbing Elle through her hand (ouch!), but our heroine gained the advantage over her opponent by keeping Water Lily’s weapon out of commission and beating her down unarmed. One last powerful punch did the trick as Elle left Water Lily to attend to Joseph. However, Water Lily wasn’t out of the fight just yet and was about to attempt another strike when she was stopped by Jr. The two have a quiet chat, with Jr. ending all ties with Water Lily stabbing her through the heart. Elle seemingly surrenders to take her place and work with Jr. Even he seems to have a change of heart and believes that Elle can still accomplish more than she has, working more closely with him. Elle does make another attempt at assaulting Jr. but isn’t able to, causing her to sheath her blade. However, Elle was able to slash Jr.’s eyes with lightning speed, finally breaking through and leaving a mark he won’t soon forget. I also have to say, hearing Elle mention she’ll be the last thing he’ll see as he screams in agony was the perfect closing moment of the two. Even though Elle wasn’t able to kill Jr. and she could eventually escape, which made me happy, especially how she left her mark on such a despicable character.

Joseph unloads his regrets and failures when Elle comes to his aid after injuring Jr., apologizing for causing any pain to her. He assures Elle of having a soul and being more human than he showed. Emotions were running high, as Elle confesses of only having good memories of Joseph sharing a tender moment for Toonami fans to soak in (which isn’t something fans always see). Joseph gently places his hand on her face, making this the first time sharing his gentle side with Elle, creating a ton of anxiety for me because something always sad happens after true feelings are shared. As both were leaving the room, Joseph pushed Elle out in the hall at the last minute and closed the door in his final act of atonement. Joseph denotes the explosives, destroying all specimens for replicant production, killing himself in the process. Quite the emotional climax of the series that hit home for me and probably many viewers. I wanted Joseph’s fantasy of spending more time with Elle to become a reality, and knowing it won’t happen is sobering. Happy endings are rare, and I would have loved to see this happen due to how beautiful it looked in Joseph’s dream.

One month later, Officer Davis, now in a wheelchair, receives a warm welcome back to the precinct by fellow officers. Davis promises to fall in line, but I don’t know how long that will last since her intuition is the leading force she follows. As Davis looks at a picture of Jr. on her computer screen, we’re taken to Jr., now blind, claiming to see “endless possibilities.” I’m unsure what he means by this, but it can’t be good. And it would seem that people within his company feel that his direction or leadership doesn’t coincide with his father’s interest. And what would lead to the main story of Blade Runner 2049. Back at Joseph’s apartment, Doc Badger shows up to see if he’s around, so I assume he doesn’t know about his death yet. Badger notices the sword Elle borrowed from his shop at the beginning of the series, bringing her story in Los Angeles to a close. The series wraps up with a shot of Elle watching a truck, similar to the vehicle she was in the first episode, pass by as she leaves L.A. on Joseph’s motorbike with a smile on her face. I’m glad Elle got revenge on all individuals involved in the doll hunt and can move on, free to live life without the burden of questioning the validity of her memories. The ending gave a tone of finality, while still being a bit open ended. But I enjoyed seeing how Elle’s story played out and gave Blade Runner fans another wonderful piece of media to enjoy!

Overall, Blade Runner: Black Lotus was an enjoyable series despite starting at a slower pace than fans are used to seeing. Elle’s determined personality and fighting skills made her a good protagonist, giving fans a strong female character who can hold her own and not depend on anyone else to be saved, which I love seeing. The voice acting overall was shaky at times in some episodes, but there was a huge improvement as the series progressed. In all, it was a pleasure for these actors/actresses, who are well known in television and film, to be in this series, and I hope this is not the last time we hear them in any anime projects! It has been fun reviewing this series, and I hope fans enjoyed the show as much as I did.